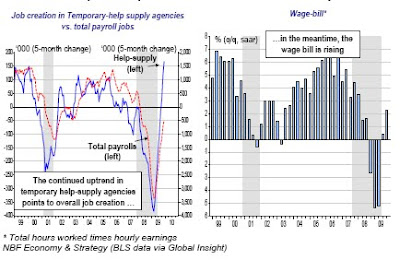 The perils of predicting US monthly payrolls! To my surprise, there were no huge gains in the December payrolls to spook the bond market on Friday. The bond market remains calm, for now.

So where did I go wrong? For one, I should have listened to my bond trader buddy who told me he was going long ahead of report and then short. He called me up today to remind me he was right. He told me that the 10-year bonds will trade in a range for a while and he doesn't agree with Bill Gross who sees yields climbing above 4.50%.

He also reminded me that there is a natural upper cap on bond yields. "Remember what we talked about a while back, at 7% or more, pension funds will lock in those rates in a flash, drying up supply."

I made other mistakes on my call. December is not a time for hiring people. Most companies wait for the new year before they start hiring again. In December, they're in holiday mode. Also, there is a huge supply of Treasuries hitting the market next week, so maybe they didn't want to spook the bond market right now.

But there is something else I forgot. One of the best eurodollar traders in the world trades his own account out of Montreal. He never trades in anticipation of the news, he trades the news. This also reminds me of one of my former bosses who traded currencies many years. I used to go into his office and ask him so where are we heading today? And he would always take out a quarter from his pocket and tell me "you tell me."

Having said this, I still think it's only a matter of time before we see significant gains in employment. The ISM New orders came in at 65.5 in December, following a reading of 60.3 in November. This is a leading indicator for the manufacturing sector and bodes well for employment gains in that sector (which was crushed in the downturn).

When new orders, profits, exports and imports are all surging at the same time, it bodes well for the labor market. Moreover, Stefane Marion, Chief Economist and Strategist at the National Bank of Canada, had this to say about today's unexpected drop in payrolls:

The U.S. lost 85,000 payroll jobs in December, a number that was below consensus expectations (calling for zero growth) and our own estimate calling for an increase of 85,000. The December outcome comes on the heels of an upwardly revised gain of 4,000 jobs the month before. As it turns out, November was the first month of positive job growth in 23 months.

Even if December comes as a disappointment, we very much doubt that it signifies a relapse in labour market conditions. The temporary help supply agencies added 46,500 jobs on the month, the fifth consecutive monthly increase. This brings cumulative job gains to 166,400 in that industry over that period.

As today’s Hot Chart shows (click on chart above), the growth in help-supply agencies remains strongly suggestive of overall job creation. In the meantime, consumer spending should remain supported by the continued growth in the economy-wide wage bill (total hours worked times hourly earnings) which increased for the fifth time in six months in December. As the chart above shows, the wage bill was up 2.2% in Q4, the largest increase since the onset of the recession.

Even if the outcome of the December jobs report does not change our views about growth prospects in the U.S. we recognize that the soft pace of improvement in labour markets means that the Fed has more time to remain patient before raising interest rates. As a result of this morning’s report, we now expect the first Fed rate hike to take place on August 10, 2010 instead of on April 28, 2010.

Stefane and his team are among the best economists in the industry and I trust their judgment because they have made the right calls, even if they were a bit early sometimes.

But for those of you who only see gloom & doom, I recommend you read Albert Bozzo's article on CNBC, Why Job Growth Will Be Weak—And Painful—This Time. I prefer to look forward, not backwards, when looking at changing economic fundamentals. One disturbing trend that concerns me is that job bias claims based on disability and religion are rising.