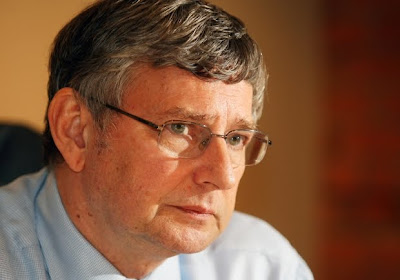 Oh sure, it pays well. And as CEO of Edmonton-based Alberta Investment Management Corp. (AIMCo) you get to play with real money.

Running a pile that big must be quite a rush — on a good day, anyway. On a bad day? Not so much.

Alas, the global economy and world equity markets have endured more than a few bad days lately, with many more to come.

When your portfolio can rise or fall by as much as $300 million by supper time, it requires someone with ice in his veins to manage it.

De Bever certainly qualifies, and that’s a key reason why AIMCo managed to post a healthy 7.4 per cent net return on assets for the fiscal year ended March 31.

Thanks to big gains in real estate (22.8 per cent), real return bonds (16.3 per cent) and private equity (13.1 per cent), AIMCo overcame a perfectly lousy year for stocks.

The provincial Crown corporation’s Canadian equity holdings slid by 6.9 per cent — reflecting a decline in the overall market — and its global equities rose a modest 4.7 per cent.

Despite the turmoil in stock markets, AIMCo topped most of the benchmarks against which it measures its performance. But de Bever was in no mood to gloat Wednesday as AIMCo released its 2011-2012 annual report.

With Europe’s festering sovereign debt crisis far from resolved and the U.S. economy slowing, the future looks anything but clear.

“As much as I’m proud of what we did last year in a bad market, I’m nervous about what’s coming,” says de Bever.

“Right now we’ve put our clients on notice that in the next year or two we may have one of those episodes like we had in 1987, where you had a quick changing of gears in markets. We’re trying desperately to make sure that we’re ready for that.”

De Bever’s big worry is that the 30-year-old bull market in bonds is ending. Yet it’s impossible to predict the timing of the event perfectly. Much will depend on how governments in Europe and the U.S. ultimately deal with their massive debts, and when interest rates start to rise.

In his view, German Chancellor Angela Merkel’s austerity approach is the wrong way to go, but it may take another couple of years before Europe moves to boost its recession-bound economies.

“We’re having very low GDP growth and the reason for that is that governments are frugal, individuals are frugal, and in economics that leads to something called the paradox of thrift,” he says.

“Everybody is frugal because it’s in their own best interests, but collectively that makes demand less than supply, so you have very high unemployment. In a lot of European countries youth unemployment is in the 30 to 40 per cent range. What that tells me is that the policy of austerity isn’t working,” he adds.

“But the politics around it in the U.S. and in Europe are so awful that it’s not changing. The austerity mantra is still there, and the way I like to express it is, austerity is great for the soul, but it’s not so great for the economy. So that’s the dilemma.”

Eventually, governments will ditch the austerity approach and move to “reflate” their economies rather than face outright default on their debt, de Bever believes.

“One way they’re likely to do that is to promote more government investment, particularly in the infrastructure area. Everybody is talking about that but nobody is doing anything. But my guess is, sometime in the next year that’s going to start to happen. Hopefully that will make GDP growth a little stronger, and when that happens interest rates should start to firm.”

When the move does happen, de Bever vows that AIMCo will be ready to jump in, since it regards public infrastructure as an attractive alternative to bonds in the years ahead. Still, he admits he’s frustrated by the dearth of suitable investment opportunities right now.

“I was in the U.K. three weeks ago talking to the Lord Mayor of London. The U.K. had come to Edmonton, believe it or not, to encourage us to put more money into U.K. infrastructure. So then I go and say ‘OK, I’m here. Where are the projects?’ And there’s nothing there. You find that all over the place.”

I will cover AIMCo's fiscal 2012 results in detail next week. Those of you who want to read their annual report can do so by clicking here. It's excellent, full of detailed information.

Leo de Bever is one of the smartest investment managers in the world. If you ever sat with him one on one or in a group meeting, you'd know exactly what I'm talking about. Extremely well read, understands all sources of risk in public and private markets, and is able to synthesize these risks to understand sources of systemic risk for overall market.

In early May, he appeared on CNBC, calling the top on bonds. His timing was a bit off because Treasuries continued to rally to new record lows as euro woes and Greek elections caused a massive flight to safety, but to be fair, he said it was "near" and he didn't know exactly when.

Global pension funds should take heed of de Bever's ominous warning. Their flight to safety has skewed the market as many of them are unable to cope in these volatile, rigged markets dominated by high frequency algos trading macro news out of Europe and elsewhere.

As for paradox of thrift, a topic I covered exactly two years ago warning it will pound pensions, he's absolutely right that Merkel's austerity measures aren't working and that governments around the world adopting such measures will face increasing political pressure to reverse course and reflate their economies, focusing primarily on growth and job creation, not cutting deficits.

Reuters reports that leaders agreed on Friday to bend their aid rules to shore up banks and bring down the borrowing costs of stricken members like Italy and Spain, in a sign the bloc is adopting a more flexible approach to solving its two-year old debt crisis.

As I stated many times, the power elite will do everything they can to thwart a protracted period of global deflation. Those of you who don't understand this will never make money in these volatile markets.

Is Leo de Bever right to warn of storm clouds ahead? Yes, he's right because when yield thirsting pensions start collectively shifting out of bonds into stocks again, and central banks start reining their liquidity, the disruption can mean a major backup in bond yields. When that happens, it could spell chaos for markets.

The good news is we don't have to worry about that yet. I see a major summer rally on its way. Below, de Bever's CNBC interview done in early May. Also embedded a Bloomberg interview with Philadelphia Trust Co.'s President and CEO Michael Crofton discussing the European debt crisis. He thinks the response from European leaders wasn't good enough as they need more money and more clarity.