U.S. employers created 69,000 jobs in May, the fewest in a year, and the unemployment rate ticked up. The dismal jobs figures could fan fears that the economy is sputtering.

The Labor Department also says the economy created far fewer jobs in the previous two months than first thought. It revised those figures down to show 49,000 fewer jobs created. The unemployment rate rose to 8.2 percent from 8.1 percent in April, the first increase in 11 months.

Dow Jones industrial average futures, which were already down 100 points before the report, fell an additional 100 points within minutes of its release.

The yield on the benchmark on the 10-year Treasury note plunged to 1.46 percent, the lowest on record, suggesting investors are flocking to the safety of U.S. government bonds

The economy is averaging just 73,000 jobs per month over the past two months — roughly a third of jobs created per month in the first quarter.

Weak job growth could damage President Barack Obama's reelection prospects. Mitt Romney, the Republican challenger, has made the economy the central theme of his campaign.

If I were Mitt Romney, I'd stop campaigning at Solyndra and start going to job banks and unemployment offices to visit the growing ranks of unemployed.

The Obama administration can rightly claim they inherited a monumental mess but if job growth doesn't pick up significantly from these paltry levels, President Obama is not going to get a second term, which is exactly what most of the corporate and financial elite want (let's call a spade a spade).

The weak job numbers suggest the crisis in Europe is having an impact on US corporations' hiring plans as the global economy slows. Think about it, every day they are bombarded with the prospect that Europe will implode. After Grexit, it's a banking crisis in Spain, then Italy and Portugual.

What is absolutely astonishing is that Chancellor Merkel is still dragging her feet, refusing to go ahead with a common eurobond market. The Associated Press reports, German exports rise 5.8 per cent in Q1 but signs of trouble in eurozone:

New figures show German exports up 5.8 per cent in 2012's first quarter over the same period last year, but slowing within the key European Union market and dropping sharply in those European nations worst hit by the financial crisis.

If the US and rest of the world economies slow, Germany can kiss those non-EU exports goodbye. But Merkel is steadfastly and foolishly refusing to cave in on a common eurobond market, increasingly isolating herself from a growing chorus of European critics who blame her for letting the euro crisis smolder.

Importantly, the world is is at a dangerous crossroad. Bad policy decisions threaten the global recovery. We can't expect central banks alone to stimulate via more quantitative easing. World leaders have to admit that force-fed austerity has been a catastrophic failure pretty much everywhere it's been implemented because the real crisis isn't debt, it's the lack of jobs.

We have a growing number of young people graduating from university with a mountain of debt and they can't find decent jobs to pay off their student loans. Any labor economist will tell you all about "hysteresis" in the labor markets, which just means the longer people remain unemployed, the harder it gets to find work, increasing the likelihood of permanent unemployment, increasing social welfare costs and exacerbating the debt problem.

Economic libertarians will say "who cares? that's what capitalism is all about, let the market restore equilibrium", but this is pure nonsense. The ugly truth is that modern day financial capitalism has disproportionately rewarded the financial services industry at the expense of almost every other industry.

Last month, when the April report came out, I wrote about money, power, Wall Street and disability. People are tired of watching banksters, fund managers, and Wall Street "whiz kids" make off like bandits while they struggle to find work to pay off their mortgages, make the rent, and feed their family. And politicians who continue pandering to the financial elite still don't get it, which is why they suffer the consequences at the polls.

In November, I asked whether policy blunders will lead to a global meltdown. I was much more hopeful that European leaders would finally wake up and realize the catastrophic effects of savage austerity accompanied by no growth plans. I was actually convinced that by this time, European leaders would have moved ahead with a common eurobond market.

Instead, we get more political dithering, some photos from meaningless G8 and Davos summits where absolutely nothing gets done. No wonder 10-year yields on US Treasuries are falling further to historic lows, the world is at risk of entering a protracted period of debt deflation and the bond market vigilantes know it. All they have to do is watch one policy blunder after another to convince themselves that the easy trade to make is short euro and go long US bonds.

Below, Lance Roberts, CEO of Streettalk Advisors, talks to Yahoo's Aaron Task warning, After May Swoon, Look for Bounce in June…And Sell Into It. He thinks that after a big selloff, you get a bounce and then another bigger selloff. Also embedded a discussion between Aaron Task, Jeff Macke and Daniel Gross on how 2012 gains have been erased in a torrent of selling.

Arun Mularidhar, Chairman and Co-CIO of AlphaEngine Global Investment Solutions, sent me an interesting chart below, comparing last summer to this summer. As you can see, it's a scary chart (click on image to enlarge): 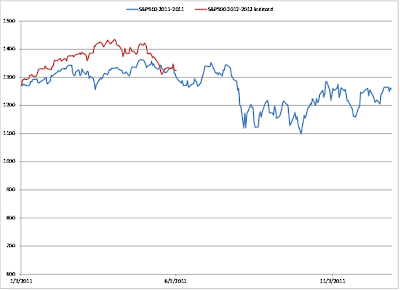 Are we headed into another crazy summer like last year? Perhaps but I don't think so. As gloomy as it is out there, I see a major reversal in June and think that risk assets are way oversold here as scared investors fear the end of the world.

Go back to read my comment from a couple of days ago on where top funds placed their bets in Q1 2012 and ask yourselves what are top funds doing now? I added a new video and a lot more funds to track in that post. By the way, that guy at the top of that post was Monroe Trout, a legendary trader who delivered the best risk-adjusted returns in the business and then had the wisdom to quit at a relatively young age to enjoy his family and life. Very smart man.