Raise the Retirement Age to 80? 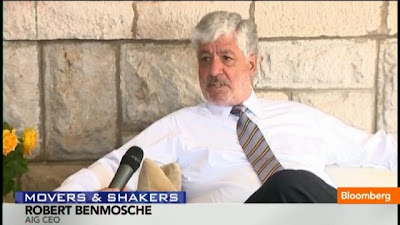 “Retirement ages will have to move to 70, 80 years old,” Benmosche, who turned 68 last week, said during a weekend interview at his seaside villa in Dubrovnik, Croatia. “That would make pensions, medical services more affordable. They will keep people working longer and will take that burden off of the youth.”

The crisis, now in its third year, threatens to destroy Europe’s 17-nation currency union as Greece contemplates exiting the euro and Spain sees its bond yields rise and banking industry falter. German Chancellor Angela Merkel hardened her opposition to joint debt sharing in the euro region as U.S. President Barack Obama singled out Europe’s leaders for not doing enough to arrest the crisis.

Greece abandoning the euro could be a disaster for the country and Europe must work to keep that from happening, said Benmosche, whose company was the world’s biggest insurer before it took a U.S. bailout.

“People in Greece have to see there is no easy way out of this” and the government must get them to work longer, he said in the June 2 interview on the Adriatic coast. “If not, and if they go to their own currency, I think they will see huge inflation and it will be devastating for people on fixed incomes.”

Greece, where the average life expectancy is 81.3 years, has an effective retirement age of 59.6, among the lowest in Europe, according to data compiled by Bloomberg. French President Francois Hollande, the Socialist who was sworn in last month, has pledged to cut the retirement age to 60 from 62 while increasing corporate and bank taxes and introducing a 75 percent levy on earnings of more than 1 million euros ($1.2 million).

Peter Hancock, CEO of AIG’s Chartis property-casualty unit, said last week the insurer has assigned staff from Argentina to advise their counterparts in Athens as the company prepares for a possible Greek exit from the euro, with the common currency at its lowest against the U.S. dollar since June 2010. Argentina defaulted on a record $95 billion of debt in 2001 and later abandoned a decade-long 1-to-1 peso peg to the greenback.

“We have gone through the crisis in Argentina and other countries over time, so we have experience,” Benmosche said.

The short-term nature of some of the company’s insurance contracts would minimize disruption if Greece stopped using the euro, he said.

“Our premiums would convert to the local currency, but if they do, so will our obligations,” he said. “We will deal with the rules at the time.”

Benmosche has sold non-U.S. life insurers, a consumer lender and other businesses to pay back its taxpayer rescue, which swelled to $182.3 billion as the U.S. extended more credit and lowered the interest charged. The Treasury Department has cut its stake to 61 percent from 92 percent through three share sales totaling about $17.6 billion. In the most recent two, AIG bought back a total of $5 billion in stock.

“The overhang from the government’s ownership interest in AIG is in the process of going away,” Paul Newsome, an analyst at Sandler O’Neill & Partners LP, wrote in a May 30 research note. “AIG should have sufficient enough capital to facilitate the Treasury Department’s exit.”

Treasury raised $5.8 billion in the first offering in 2011, selling for $29 a share. At the same time, AIG sold 100 million shares for $2.9 billion to demonstrate access to the capital markets and satisfy a condition of its bailout. The insurer bought half of the $6 billion in stock the department divested at $29 apiece in March and $2 billion of a $5.75 billion offering that went for $30.50 a share in May. The government needs to average $28.72 to break even on its investment.

AIG slid 6.8 percent on June 1 to close the week at $27.21 after U.S. employers created the fewest jobs in a year and the nation’s jobless rate rose to 8.2 percent. Reports also showed manufacturing grew less than estimated in the U.S. and China, and contracted for a 10th month in the euro region.

Benmosche said people and businesses in the U.S. lack confidence and are hesitant to invest as financial regulation and tax policies remain unsettled.

“I am optimistic that we’ll continue to grow, and if we get past this period of uncertainty and gain confidence again in the U.S. economic system, that will help lead the world out of the situation we are in today,” he said.

As the G7 finance ministers resume their emergency talks to deal with the crisis in Spain, I hope they take Robert Benmosche's proposal to raise the retirement age to 80 seriously.

In fact, why stop at 80? We should raise it to 120, ensuring that pension beneficiaries will never touch a dime of their retirement savings. This way, too big to fail banksters and insurance cronies like AIG can keep on speculating in markets and every time they screw up, governments can bail them out with pension monies.

Brilliant idea. Should have thought of this a long time ago. Would have saved me thousands of needless blog posts on pensions and investments. President Obama, Robert Benmosche should be your next Secretary of the Treasury. The man understands the nature of the crisis and his proposal merits serious consideration. This is the type of leadership America and the world needs.

Of course, I'm being sarcastic. Every time I hear such proposals I cringe, especially when they come from some corporate leader whose company is only alive today because of a massive government bailout. He should learn the golden rule of corporate politics, if you're clueless about public policy issues, best to keep your mouth shut.

To be sure, if you're lucky and healthy enough to work til you're 80 or beyond, go for it. Most people simply cannot work past a certain age either because of poor health or because they are discriminated against for being "too old". During a time when we are having a hard time creating jobs for our youth, do we really think we are going to place all these baby boomers turning 70 into Wal Mart jobs?

And I'm not convinced we're becoming a healthier society. Mayor Bloomberg received a lot of flack for banning the Big Gulp, but with a diabetes pandemic brought on by obesity, we might have to lower the retirement age in 30 years.

Let's get real on pensions and the looming retirement crisis. Yesterday I wrote about GM and Ford's pensions Jubilee, warning that offloading pension risk onto employees will only bring about widespread pension poverty. This is setting a dangerous precedent and governments need to respond by adopting radical new thinking or the risk seeing exploding social welfare costs in the future.

Below, Bloomberg interview with AIG CEO, Robert Benmosche. Also embedded a Yahoo Breakout interview with Lee Munson, Chief Investment Officer at Portfolio, LLC and the author of the book Rigged Money: Beating Wall Street At Its Own Game and a clip from Fox13 in Tampa, Florida.