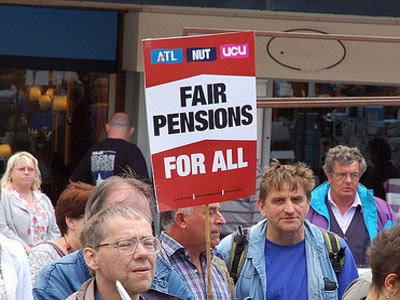 New accounting rules approved on Monday are likely to show public pension funds are in a weaker financial position than previously thought and intensify disputes over how public retirement systems are funded.

The Governmental Accounting Standards Board, which sets the accounting standards for the public sector, finalized a single system of accounting to replace the menu of financial reporting options public pension funds currently use.

State and local governments will have to post their net pension liability - the difference between the projected benefit payments and the assets set aside to cover those payments - up front on financial statements, under the changes.

"The pension liability will appear on the face of the financial statements for the first time. That's going to create the appearance of a weaker financial position," said Robert H. Attmore, GASB chairman, who said the board intended to "peel back the veil so things are more transparent and there's more information for policy makers."

Governments participating in multi-employer plans - essentially smaller cities that are part of the state systems - will have to represent their share of liabilities, which could also make them appear financially weaker. Currently, they only have to state how much they have contributed.

Richard Ciccarone, managing director and chief research officer at McDonnell Investment Management, said GASB was headed in the right direction in terms of comparability and transparency, adding that some of the changes will sharply increase deficits for some governments.

"It shouldn't immediately cause anyone to file for bankruptcy," he said, adding that "it may immediately raise the level of attention to seriously do something here."

The biggest GASB change affects how the pension funds project rates of return on their investments, which provide 60 percent of their revenue. Underfunded pensions would have to lower their estimates for returns.

GASB also eliminated a process known as "smoothing," where the pension systems spread the liabilities over time, making the funds more reactive to volatility in financial markets. Funds can still spread out expenses, but over a shorter time frame.

Some of the GASB changes go into effect on June 2013, with the others implemented in June 2014.

More changes are coming. Starting next month, GASB will begin work on accounting for other retiree benefits, mainly healthcare, which tend to be in worse shape than pensions.

Some critics say the reforms could distort perceptions of governments' and retirement systems' health. They worry politicians will seize on the new, larger liabilities, to push through policy changes or starve employee retirement systems.

"We're concerned about confusion of the numbers," said Keith Brainard, research director of the National Association of State Retirement Administrators. "If a plan has a liability of $4 billion, does that mean they need $4 billion today? No. It's an accounting number."

Governments typically provide about 20 percent of pension fund revenue, but under the new standards, they will not have to disclose their annually required contributions (ARC). Ciccarone, however, raised concerns that governments would no longer post this information.

The Government Accountability Office, the nonpartisan federal auditor, reported in March that "most state and local government plans currently have assets sufficient to cover their benefit commitment for a decade or more."

Still, skepticism has risen about both the long and short-term prospects of public pensions. A week ago the Pew Center on the States estimated states are short $757 billion to pay retiree pension benefits, and the total could grow.

Although it sounds like a technical accounting move, the new standard on rates of return is key to the pension wars.

Pension funds that are considered adequately funded could continue forecasting investment returns in-line with their historic averages, usually around 8 percent, under the new GASB rules. The board would only define those pension systems as having sufficient assets on hand to pay the pension of current employees and retirees, but did not set a funding ratio.

Funds lacking sufficient cash to cover benefits must lower their projected investment rate to about 3 percent to 4 percent. Specifically, the investment rate would have to match "a yield or index rate on tax-exempt 20-year, AA-or-higher rated municipal bonds," an information sheet on the changes said. On Monday, the yield for AA-rated municipal bonds due in 20 years was 3.12 percent, according to Municipal Market Data.

When investments fail to meet the forecasts, governments - essentially taxpayers - and employees must pitch in money to fill the void. At the depth of the recession in 2008, the return on pension investments fell by 25 percent, Pew found.

The new rules offer a compromise. U.S. Congress would like systems to use a rate they call "riskless," about 4 percent. Pensions counter they should use historical averages.

Pew found that Wisconsin is the best-funded retirement system in the country, and Illinois the worst.

"States like New York, which are making their contributions to their pension plans and are well-funded, their liability should not be affected by the new discount rates," said David Draine, senior researcher at Pew, about the GASB changes. "States like Illinois that are having trouble making their contributions, you would expect to be more affected."

According to a study by the Center for Retirement Research at Boston College, the funding ratio which is at 76 percent in 2010 could decline to 57 percent with the new accounting rules.

In some cases the reductions expected in the funding ratios are massive. Illinois teachers, a notoriously underfunded pension fund, currently has a funding ratio of 48.4 percent. Under the GASB's proposed changes it may fall to as low as 18.8 percent.

Pew also found states are short $627 billion for other retiree benefits, and 17 states have set aside no funds for them. According to Pew, states currently have only 5 percent of what they need for these "Other Post-Employment Benefits."

Until 2006, GASB did not have any accounting standards for those benefits.

I've already covered the pathetic state of state pension funds. I applaud these new GASB rules because they increase transparency at state and local pension funds, which in turn should make them a hell of a lot more accountable.

But the biggest problem with public pensions funds in the United States lies with a governance model that breeds corruption and mediocrity. When I wrote that ATP and APG are years ahead of most US public pensions, I meant it. The same can be said of large Canadian public pension funds which are global trendsetters.

Are Dutch, Danish and Canadian public pension funds perfect? Of course not. I can raise several issues with all these funds, even the best of them. But when I compare their overall health to that of their US counterparts, I conclude that the overriding factor explaining their success lies with their superior governance model which focuses on accountability, transparency and alignment of interests.

Having said this, in order to get the governance right in the US, they need sweeping political change. Importantly, they need to create independent investment boards that operate at arms-length from state and local governments. Fat chance that this will ever happen, especially in the US where fast times in Pensionland means everyone wants a slice of the pension pie.

Below, as more and more states struggle to keep their pension promises, a new Pew study painted a stark picture of just how big the budget hole has become in some states. PBS News Hour's Jeffrey Brown discusses the pension gap with the Pew Center's Kil Huh and Northwestern University's Joshua Rauh.

Finally, speaking of new rules, embedded a clip from Bill Maher's latest show. While pension shortfalls aren't funny, Bill Maher is, and even though I don't always agree with him, he offers great comedy relief. Below, his latest "New Rules". Priceless.