Alpha Falling By The Wayside? 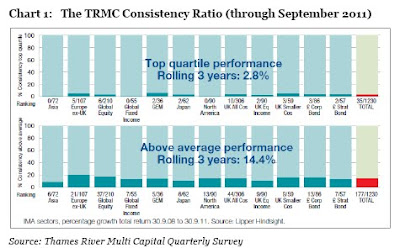 Back to a topic I love covering, "chasing alpha." Dan Solin, senior vice president at Index Fund Advisors, wrote a column for US News and World Report on the myth of the investment guru:

On November 15, 2006, Andy Serwer, the managing editor of Fortune, wrote an article entitled: The greatest money manager of our time. Serwer waxed poetic about the virtues of Bill Miller, the fund manager for Legg Mason Value Trust, which had $20 billion in assets at that time. Serwer noted that Miller had outperformed the stock market for 15 years “through the tech bull market, then the crash, and now the recovery.”

Miller’s stock picking methodology added to his mystique. He ran a required book club for his underlings. He was the chairman of a think tank founded to study “complexity.” Others marveled at his ability to converse with Nobel laureates in physics. Serwer noted that Miller held a “dog’s breakfast” of stocks ranging from Amazon to Eastman Kodak.

Being an investment guru was good to Miller. He bought a yacht named Utopia, complete with a heliport, gym, and a Jacuzzi. He owned over $270 million in Legg Mason stock at the time and his annual compensation was estimated to be a good chunk of the $132 million a year in revenues generated by his fund.

If you followed Serwer’s advice, you had rough sledding. According to one observer, since 2005, his fund “gave back” all of his outperformance including a loss of a whopping 55 percent in 2008.

According to Weston Wellington, vice president of Dimensional Fund Advisors, Miller’s fall from grace isn’t necessarily conclusive evidence of the failure of active management. Wellington notes that Miller’s fund expenses were a steep 1.75 percent. The blended fund expenses of a globally diversified portfolio of stock and bond index funds would be one-third of those fees or less. The difference in fees provides a “stiff headwind” for any stock picker to overcome.

Assuming Miller possesses the rare expertise of a successful stock picker, it ended up doing his investors little good. The benefits of his winning streak were transferred from the pockets of investors in his fund to him and his firm.

Miller’s demise as a stock picker is representative of what happens every day on Wall Street. Money earned by U.S. investors is handed over to brokers, advisers, and fund managers. It’s a no-lose deal for the advisers and managers, who take their cut whether they perform or not. For investors, especially those chasing returns and searching for the next investment guru, it’s often a loser’s game, causing them to underperform the market.

There is growing awareness of the inherent unfairness of this system. Maybe the next move will be to occupy Utopia.

There is a growing awareness of the "inherent unfairness of this system." And there is a growing awareness that 'chasing alpha' is a fool's paradise. This is the point Niels Jensen underscores in his December Absolute Return Partners Letter, The Facts They Don't Want You To Know About, an absolute must read for all investors, especially institutional investors chasing after hedge funds and active managers.

What have Bill Gross, John Paulson, Anthony Bolton and Bill Miller all got in common? They are all ‘rock star’ fund managers who have fallen on hard times more recently. Life in the fund management industry is not what it used to be like. Life is tough even for the supremely skilled. Markets are changing, fund managers are struggling to adapt and clients are growing restless as a result.

From the same source: Out of 1,230 funds across 12 different strategies, only 35 fund managers produced a performance consistent enough to earn their fund a place in the top quartile in each of the last three years (upper half of chart 1). In a universe of 1,230 funds, over a three year period and completely disregarding skill, the expected number of funds consistently ranked in the top quartile is 1,230*0.253=19.22.

In other words, more than half the 35 managers were there not because of skill but because, statistically, someone was always likely to ‘over-achieve’. This leaves about 15 fund managers out of a universe of 1,230 – ca. 1% - who could with some right claim that they have consistently been in the top quartile.

Indeed, extreme volatility is confounding even the best fund managers, most of which are underperforming their benchmarks in 2011. Even Soros Fund Management laid off a handful of analysts and portfolio managers in recent months. Some fund managers have closed shop, retired while others are trying to adapt to this environment, but the question remains why are institutions doling out huge fees for such underperformance, allowing fund managers to continue raking the big bucks? What are investors suppose to do?

Mr. Jensen concludes with some recommendations (and keep in mind, he's part of the industry):

Maybe those 1.5 million Brits are active equity traders which take concentrated bets on one company at any given time. Highly unlikely, but that is my preferred approach in this market, taking concentrated bets on a few companies, moving in and out of cash. Whatever the case, institutional investors really need to rethink their hedge funds strategy and start taking some more intelligent risk in their alpha and especially on their beta portfolios.

Below, John Roque, head of technical analysis at WJB Capital Group, speaks with Erik Schatzker and Stephanie Ruhle on Bloomberg Television's "InsideTrack." He discusses SALLY, alternatives to equities, why chasing alpha is a fool's paradise and why many of today's winners will be tomorrow's losers (just like some 2011 losers will be 2012 winners). Importantly, he also emphasizes that "alpha this year has a different definition," namely, "missing Netflix, Green Mountain and other stocks on the way down," mitigating downside risk. Not as sexy as the video in my previous comment on Norway's butter crisis, but good interview, well worth listening to (h/t, All Star Charts).