OMERS Gets Push Back on PRPPs? 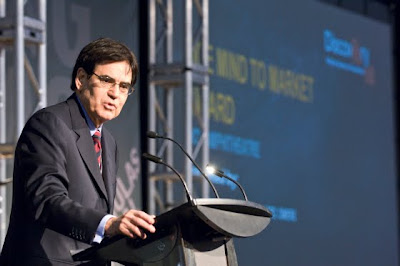 A follow-up to my earlier comment on prosecuting Wall Street. It seems that Canadian banksters and insurance hacks have gotten their panties all tied in a knot, resisting OMERS push to manage Canada's voluntary pensions (h/t Gil):

Canadian financial institutions are opposing a push by the Ontario Municipal Employees Retirement System, which manages C$54 billion ($51.5 billion) in assets, to manage voluntary pension plans proposed by the government.

Canada’s Conservative government introduced a bill Nov. 17 to create tax-sheltered pensions known as Pooled Registered Pension Plans (PRPPs), to be aimed at employees who don’t have employer-sponsored plans. The bill doesn’t specify what type of institution will be allowed to administer the plans.

Allowing pension funds such as OMERS to manage the plans would “help to keep costs for participants lower, while keeping quality of service high,” the fund’s Chief Executive Officer Michael Nobrega said in a Nov. 18 letter to Minister of State for Finance Ted Menzies, which was obtained by Bloomberg News.

Menzies agreed that “large funds can achieve lower fees,” without saying whether institutions such as OMERS would be allowed to administer PRPPs.

“Lower costs will mean more money in the pocket of Canadians when they retire,” Menzies said in a statement e- mailed by spokesman Bram Sepers.

Insurance companies and banks argue public pension funds would have an unfair advantage administering the plans because they don’t face the same regulations and costs.

“The issue is that they don’t have any capital requirements,” said Frank Swedlove, president of the Canadian Life and Health Insurance Association, which represents companies such as Sun Life Financial Inc. (SLF) and Manulife Financial Corp. (MFC) “It’s not exactly clear that it’s a level playing field.”

Public pension funds, banks and insurance companies are governed by different rules such as tax regimes, said Marion Wrobel, vice president of policy and operations at the Canadian Bankers Association, in an e-mailed statement.

“Securities regulations should be the same for all institutions,” he said.

OMERS, which manages the pensions of about 400,000 municipal employees in Canada’s most-populous province, has been searching for new sources of capital to generate greater returns. Nobrega called on the Ontario government in 2009 to allow mergers among pension funds to create “superfunds” that could compete for assets in global markets.

Unlike Canada’s banks and insurers, OMERS isn’t regulated by the Office of the Superintendent of Financial Institutions. Rather, it is overseen by the Financial Services Commission of Ontario. OMERS investment management expenses have ranged between 0.4 percent and 0.6 percent over the past five years, Nobrega said in the letter to Menzies.

The federal and provincial governments agreed last year to set up the new pension system, and the provinces must pass their own legislation to allow PRPPs to come into effect. The government has said PRPPs will address gaps in Canada’s pension system created by declining participation in employer-sponsored plans.

The system will give “a new, accessible, large-scale and low-cost defined contribution pension option to employers, employees and the self-employed,” the government said. “This is especially important for small business owners and their employees.”

The success of the system will depend on how the government ensures costs are kept low, said Ian Markham, senior actuary at Towers Watson, a New York-based consulting firm which has worked with banks, insurers and large pension funds, including OMERS.

“The devil’s in the details,” Markham said by telephone. “If an insurer or bank is currently offering a particular equity fund with an expense ratio of 2.5 percent each year and they lower it to 2.4 percent for PRPPs, is that called low cost?”

With C$1.1 trillion in assets, Canada’s pension system is the fifth biggest in the world, Towers Watson estimates.

It’s not surprising that banks and insurers are resisting OMERS’ interest in managing PRPPs, said Wayne Marston, a lawmaker with the New Democratic Party, the biggest opposition group.

“They may have all kinds of justifications for their positions, but the reality is they’re chasing fees,” Marston said in a phone interview today.

The NDP would prefer an increase to mandatory employer and employee contributions to the Canada Pension Plan, the country’s national public pension. If the government follows through with PRPPs, it should impose a cap on management fees, said Marston, his party’s spokesman on pension issues.

Participation in PRPPs may be “limited,” because Canadians already have tax-sheltered vehicles for investing their retirement savings, said Rick Robertson, a professor of managerial accounting at the Ivey School of Business at the University of Western Ontario.

“I hope I’m wrong, but I don’t think it’ll make much of a dent,” Robertson said by phone.

He expects the government won’t put too many restrictions on plan administrators, to encourage competition and keep management fees down.

“They do not want to restrict who can play in the field,” he said.

As I've already commented, PRPPs are a joke and the Canadian Government should be ashamed for introducing a bill banking on them to make a difference in this country's looming retirement crisis.

The most important thing to keep in mind is who will manage the retirement funds in the best interests of members? Is it going to be the banksters and insurance hacks, producing mediocre results while raping them on fees, or will it be a well governed, professionally managed pension fund that can lower fees and invest in both public and private markets? If it's the latter, then why not allow them to compete for PRPPs? Better yet, why not scrap PRPPs altogether and start anew by bolstering our DB plans so we can meet the retirement needs of our ageing population? Watch clip below from Global News.