Where Is the Real Smart Money Going? 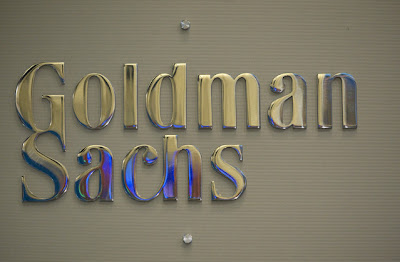 Some Friday afternoon food for thought. If you want to know where the real smart money is going, just check out what Goldman Sachs is doing. Bloomberg reports is providing cash for former Barclays trader’s hedge fund:

Goldman Sachs (GS) Group Inc. plans to provide funding for a hedge fund being started by Todd Edgar, a former commodities trader at Barclays Plc, said two people with knowledge of the preparations.

Goldman Sachs will make an investment through a so-called seeding fund that the New York-based firm started this year after raising money for it from pension funds and wealthy individuals, the person said. Edgar will get $150 million to $200 million from Goldman Sachs in return for a cut of the fees his hedge fund generates, said the people who declined to be identified because the negotiations are private.

The U.S. Congress last year restricted banks’ investments in hedge funds through the so-called Volcker rule after lawmakers concluded that financial institutions shouldn’t be using federally backed deposits for wagers on markets. The Goldman Sachs seeding fund is permitted under the law because it uses client money rather than the firm’s capital.

Edgar and his team of commodities traders left Barclays (BARC) in the third quarter of this year. His fund will trade futures and options on metals based on the firm’s views of global economic trends, the people said. The fund will be based in New York and plans to start trading next year, the people said.

Joanna Carss, a spokeswoman for Goldman Sachs in London, and Edgar declined to comment. He joined Barclays, Britain’s second-largest bank by assets, from JPMorgan Chase & Co. (JPM) in 2009.

Some hedge funds are turning to firms such as Goldman Sachs and Blackstone Group LP (BX) that provide startup financing because pension funds and other investors have shied away from smaller money managers since the credit crisis in 2008. Two-thirds of the asset growth for hedge funds since 2009 has been at firms managing more than $5 billion, according to Chicago-based Hedge Fund Research Inc.

Blackstone, the world’s largest private-equity firm, invests in hedge funds for a slice of a manager’s fees and an equity stake in the company. Hedge funds, private pools that try to make money whether markets are rising or falling, typically charge clients 2 percent of assets managed and 20 percent of any investment gains.

Edgar’s fund will be the second to receive an investment from Goldman Sachs this year. In September, Goldman Sachs invested $100 million in New York-based Palestra Capital Management LLC, a fund focused on stocks run by Jeremy Schiffman and Andrew Immerman, one of the people said.

Goldman Sachs has received about $600 million from clients to invest in startup hedge funds with plans to raise more money, the person said. Goldman Sachs’s hedge-fund investment effort is being led by two executives, Kent Clark in New York and Ali Raissi in London.

The firm shut an earlier seeding fund in 2008, a year when hedge funds lost 20 percent on average after the collapse of Lehman Brothers Holdings Inc.

Umm, can someone from Goldman Sachs please contact me (LKolivakis@gmail.com) so we can discuss seeding Canadian hedge funds? C'mon Goldman, you remember me, I'm that hopelessly cynical senior pension analyst who called you guys in the fall of 2006 to find out the best way to short structured credit. And now I'm calling for the Mother of all melt-ups.

And don't worry, we got some excellent alpha talent up in Canada. Guys and gals who can deliver true alpha on all sorts of liquid absolute return strategies, including active commodities strategies, CTAs, L/S Equity, global macro and more. I even know a guy with operational experience and excellent global network of top infrastructure execs who is looking for seed capital for a Canadian infrastructure fund. Yup, believe it or not, we're not all dumb Canucks up here. Some of us actually know what we're talking about, even if it did cost us our job.

And since you Goldman guys made a killing off my call to short structured credit before the 2008 crisis while I "suddenly and tragically" lost my job after warning my employer of the looming credit crisis, figured the least you can do is return the favor and meet with some managers who I think deserve seed capital. Don't worry, won't waste your time or mine peddling leveraged beta.

Below, Louis Gargour, CIO and Managing Partner of LNG Capital, and Ian Bremmer, President of Eurasia Group, discuss investing in volatile times on Bloomberg television. I'm not bearish on bonds but think the big surprise going forward is a massive melt-up, which is why I'm long risk assets. This will catch most hedge funds and fund managers totally offguard. Stay tuned, should be an interesting next few weeks.