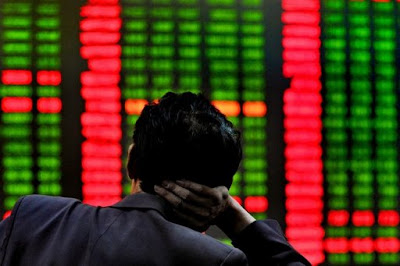 Some Chinese officials are pushing for a system that would allow local governments to invest some of nearly 2 trillion yuan ($312.5 billion) socked away in pension funds into the domestic stock market, according to people familiar with the matter, as the authorities continue to look for ways to boost returns on the amount of capital sloshing around the world's No. 2 economy.

China's securities watchdog and other government agencies have discussed a proposal that would involve setting up a new entity similar to the country's National Social Security Fund, these people said.

The AFP reports that China's national pension fund has invested $1.6 billion in shares:

Shanghai's main composite index has fallen more than 20 percent since the beginning of the year amid concerns including a slowdown in the world's number two economy as well as government tightening measures aimed at reining in inflation.

The Wednesday report boosted the Shanghai Composite Index, which rose 0.25 percent to 2,221.43 in afternoon trade as investors lay bets on the government taking further steps to lift the market.

In October a government investment arm increased its stakes in the country's major lenders, which analysts said at the time was aimed at shoring up support for the market.

Dai Xianglong, the head of the social security fund, said China's largely unmanaged pension funds should be investing in equities to get better returns, the China Daily said Wednesday, without mentioning the recent fund injection.

"Nearly all the pension funds in the world invest in the stock market," Dai was quoted saying.

"I think it is OK to allocate part of the pension funds managed by local governments to buy stocks. This will help preserve and increase the value of pension funds."

A local fund manager told the Shanghai Securities News that the latest injection of funds suggested the government believed the market had nearly bottomed and there was "long-term value".

And they should be heavily subsidizing and investing in Chinese solar shares. Don't worry about the grumblings from US and India, the solar melt-up is in its nascent stages. Even Google and KKR announced plans to jointly acquire a portfolio of solar projects in California from Recurrent Energy, a subsidiary of Sharp.

I smell a big fat Greek melt-up in stocks in 2012. But for all you hopeless bears, have a listen to John Mauldin, president of Millennium Wave Investments LLC, and Thomas Brown, chief executive officer at Second Curve Capital and a Bloomberg contributing editor, talk about debt challenges for Europe and the U.S., the financial industry and the payroll tax-cut debate in Congress. They speak with Lisa Murphy and Dominic Chu on Bloomberg Television's "In the Loop."