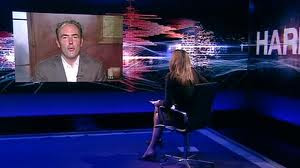 Kyle Bass, the hedge fund manager who foresaw and made a fortune speculating on America's sub-prime mortgage crisis and then from betting that Greece would default, spoke with BBC's HARDtalk host, Sarah Montague. The interview was posted on Zero Hedge but the stupid gold shills over there harped on his comment that "buying gold is just buying a put against the idiocy of the political cycle."

Mr. Bass is an intelligent hedge fund manager and was careful not to talk about how much money he personally made off these trades, calling them "asymmetric hedges" and stating that he's being a "prudent fiduciary" (it's alright Kyle, you bet the ranch and hit the mother of all jackpots!).

I don't agree with Mr. Bass on a lot of topics, including his criticism of "profligate southern European states", his short JGB "hedges," or his long position on "gold and guns," but he's definitely a breath of fresh air, especially after listening to the typical market monkeys that parade in front of CNBC cameras on a daily basis.

One thing I really don't agree with is his ridiculous 'atonement' comment at the end: "capitalism without bankruptcy is like is Christianity without Hell." It's not the 'spending idiocy' that's going to catch up with us, it's the bailout idiocy and the fact that absolute power, corrupts absolutely. Think Mr. Bass and his short-selling buddies seriously need to go Greek for a week. Watch the interview below.