A Conversation With HOOPP's John Crocker 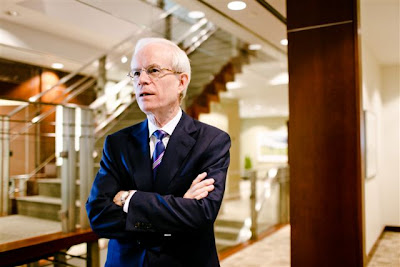 Part of the perks of publishing the best blog on pensions & investments is that I get to talk to some of the best pension fund managers in the world. On Thursday afternoon, after the market close, I spoke with John Crocker, chief executive of The Healthcare of Ontario Pension Plan (HOOPP), who last month announced he is stepping down in December and will be replaced by Jim Keohane:

Mr. Keohane, the pension plan’s chief investment officer and senior vice-president, is credited with playing a key role in the adoption of a liability-driven investment strategy that enabled the pension to maintain its fully funded status.

“Through the efforts of Keohane and HOOPP’s in-house investment team, the Fund has averaged returns of 6.28% over the 10-year period ending Dec. 31, 2010, adding more than $17-billion to the HOOPP Fund,” the pension plan said in a statement Monday.

Mr. Crocker, who has been chief executive of HOOPP for a decade, is credited with modernizing the pension plan’s investment and administrative systems and developing a client-focused culture. He has also been an outspoken advocate for the defined benefit pension plan model, which guarantees a calculated payout to workers when they retire.

Those of you who have been reading my blog over the last three years know that I consider HOOPP to be one of the best defined-benefit pension plans in the world. HOOPP's senior managers are no-nonsense, humble, competent pension fund managers who stick to what they do best -- manage pensions in the best interests of their plan members.

I called Mr. Crocker after market close. He was expecting my phone call and answered himself: "Hello Leo, how are you and how is my home town of Montréal?" We talked about our alma mater, McGill University, and Mont-Royal, the suburb where he lived and where I live. He asked me if the train still passes through the tunnel under the mountain because he wanted to show his wife and I said yes.

I immediately got the sense that I'm speaking with a very nice person who isn't full of himself. No pension ego here, just a nice guy who is willing to take an hour of his time to share some thoughts on HOOPP's success and the future of DB plans. Realize that I focus too much on pension "weasels" and not enough on pension "princes". But there are nice people in the pension world, people like John Crocker, Leo de Bever and many more who I have had the privilege to talk with.

During Crocker's 10-year term as HOOPP CEO, the Plan has enjoyed great success on the investment and funding fronts. HOOPP is one of the few defined benefit plans anywhere that is fully funded, and despite two major market downturns in the first decade of the century, HOOPP's returns average 6.23 per cent for the 10-year period ending Dec. 31, 2010.

Crocker told the audience that the defined benefit pension plan model is the best there is for ensuring retirement income adequacy. "Throughout my career, the best way to deliver – effectively and efficiently – retirement income has been through a defined benefit pension plan. No other type of savings arrangement builds towards a specific income replacement goal," he says. "It's a collaborative effort between the member, the employer, and the investment strategy – and when it works, which is nearly all of the time, the result is dignity and independence for retirees."

The award, says Alyssa Hodder, Editor of Benefits Canada, honours "individuals who have demonstrated leadership and innovation – and who have made a real difference in the pension and investment industry."

So what has led to HOOPP's success? Mr. Crocker outlined these factors:

We then shifted focus from investments and operations to the bigger picture, delving into the challenges that lie ahead for defined-benefit plans during this era of deleveraging/deflation:

Barring a market meltdown, HOOPP is on track for another stellar year. Most Canadian pension funds are reeling after Q3. The success of this organization is a true testament that DB plans can work if you get the governance right. I thank Mr. Crocker for taking the time to discuss his views with me and wish him a great retirement.

I hope he doesn't fully retire, however, as I would like to see him replace Paul Cantor as the Chair of the board at PSPIB and continue his advocacy on the benefits of defined-benefit plans. We need more John Crockers in this world. You can watch this BNN interview where he discusses the success of HOOPP and benefits of DB plans in a volatile world. Finally, my heartfelt thoughts and prayers go out to all veterans and their loved ones on this Remembrance Day.