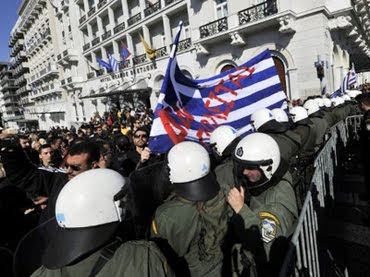 A follow-up comment to my previous one on the rise of technocracy in Europe. RT reports, Unelected eurocrats hijack sovereign states?:

In Italy, former European commissioner Mario Monti is forming a new cabinet to tackle the country’s debt. As technocrat governments take over in Greece and Italy, are the leaders nobody voted for likely to do a better job than the old crew?

­The economist and former European Union competition commissioner Mario Monti has agreed to start forming a new Italian government. He said he would get to work immediately and "with a great sense of responsibility and service towards the [Italian] nation," as cited by the Associated Press.

And Mario Monti, who received a formal mandate from President Giorgio Napolitano, now faces the real challenge of preventing an Italian default that risks tearing apart the entire European Union.

The project that sought to unite Europe, 17 countries of which now share a single currency, attracted fierce criticism from the very beginning.

As far back as 2004, European Parliament member Nigel Farage warned: "We have witnessed the beginning of a dishonest and downright dangerous German presidency [which seeks] to revive the EU constitution but to do it in such a way that you want to avoid referendums in the key member states.”

Some might now be wishing they had heeded the warnings as one after another of the member states begins to wobble, with Italy being the latest to come under scrutiny.

“We have been witnessing, at least in the last month, a growing pressure from Europe,” says political journalist Fabrizio Maronta. “And I’m talking in particular from France and Germany, partly the UK, certainly the European parliament and the Commission, for Berlusconi to step back.”

The crisis has so far seen the leaders of Greece and Italy replaced by people who were never elected to office, but who know their way around Brussels.

In Italy though, with Berlusconi gone, painful reforms now need to be implemented to meet tough EU demands. And for the first time since the crisis began, talks are turning to the possibility of members exiting from the euro, or the creation of a core Europe, with countries like Germany seen to be leading the way.

However, some observers are warning against such a strategy.

“I think it’s not in the best interests of the Germans to keep going on with this attitude of ‘oh you’ve behaved badly, we’re going to punish you,’” says Gustavo Piga, a professor of economics from the University of Rome. “That’s not a union. In the United States of America if a state behaves badly – imagine Texas behaving badly – what do you think Obama is going to do? Say, ‘were going to kick you out of the United States of America’? No, they are not going to do that.”

The growing sense of a bad euro group and a good euro group has not gone unmissed by struggling countries.

And while it is clear that those who overspent must now face up to painful austerity measures, the sense of being treated like a naughty schoolchild has only added to the growing strain in the euro community.

“If Italy now starts to ‘behave well’, so to say, they will increasingly expose France, and especially Germany, to the task they now need to be up to – that is, to express a political leadership now not just for their own countries but for Europe as a whole,” says Fabrizio Maronta.

Euro tensions have not gone unnoticed by the financial markets which have punished the political leaders for dragging their feet in dealing with the crisis. Struggling economies like Italy are now caught in a situation which leaves them with no room for mistakes.

With new governments now being formed in Greece and Italy, the spread of Brussels’ influence within Europe is causing concern. And winning back public trust is going to be a vital challenge.

Whilst dramatic decisions and changes have come thick and fast in recent weeks, the people have been left on the sidelines watching and wondering when or if they are going to be consulted.

Italy is being considered by many as a test case for the entire eurozone. If it fails, it could bring the whole system crashing down with it.

The question now is whether or not those measures can succeed or whether we will see them go the same way as the others put forward by the European elite, who have so far failed to come up with any credible euro rescue.

A credible rescue plan to avert an implosion in the eurozone, that's what is still missing in this whole euro saga. Below, watch the RT report and then watch EU Parliament member, Nigel Farage, blast his EU counterparts telling them "I want you all fired!" and warning that "we're heading to a Europe of rebellion and violence" (h/t Nathan). Hope he is wrong but fear he might end up being right.