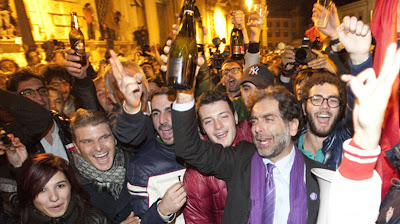 Silvio Berlusconi resigned on Saturday to make way for an emergency government Italians hope will save them from financial ruin as thousands of jeering protesters shouted "clown, clown" and toasted the end of a scandal-plagued era.

Berlusconi, who failed to secure a majority in a crucial vote on Tuesday, stepped down as prime minister after parliament passed a package of measures demanded by European partners to restore market confidence in Italy's strained public finances.

Former European Commissioner Mario Monti is expected to be given the task of trying to form a new administration to face a widening financial crisis which has sent Italy's borrowing costs to unmanageable levels.

More than a thousand demonstrators waving banners mocking Berlusconi flocked to the president's residence at the Quirinale Palace as the motorcade carrying the billionaire media entrepreneur, who has been Italy's longest serving prime minister, entered.

The crowd grew so unruly that Berlusconi was forced to leave secretly via a side entrance and return to his private residence.

Cheers broke out when they heard that Berlusconi had resigned and the square broke out into a party atmosphere. People sang, danced and some broke open bottles of champagne.

An orchestra near the palace played the Hallelujah chorus from Handel's Messiah. "We are here to rejoice," one said.

Demonstrators chanting "resign, resign, resign" also gathered outside the prime minister's office and parliament, heckling ministers as they walked between the two buildings.

A small group of pro-Berlusconi demonstrators gathered outside his residence but were hugely outnumbered by opponents.

moved from the presidential palace to Berlusconi's residence to continue the noisy celebrations below his windows.

"This is something that deeply saddens me," the Italian news agency Ansa quoted Berlusconi as telling aides.

President Giorgio Napolitano will begin consultations with political leaders at 5:00 a.m. EST on Sunday morning. He was expected to ask Monti for form a government on Sunday night.

Italy, the euro zone's third largest economy, came close to disaster this week when yields on 10-year bonds soared over 7.6 percent, the kind of level which forced Ireland, Portugal and Greece to seek international bailouts.

Berlusconi, who failed to secure a majority in a vote on Tuesday, promised to resign once parliament passed the package of economic reforms demanded by European partners to restore confidence in Italy's battered public finances.

Monti, named by Napolitano as a Senator for Life on Wednesday, is expected to appoint a relatively small cabinet of technocrat specialists to steer Italy through the crisis.

With the next election not due until 2013, a technocrat government could have about 18 months to pass painful economic reforms but will need to secure the backing of a majority in parliament and could fall before then.

With a public debt of more than 120 percent of gross domestic product and more than a decade of anemic economic growth behind it, Italy is at the heart of the euro zone debt crisis and would be too big for the bloc to bail out.

Financial markets have backed a Monti government and as prospects of Berlusconi going became firmer last week, yields dropped below the critical 7 percent level, although they remain close.

"We don't yet have a new government in Italy and we have to wait, but I'm sure if Mario Monti will be appointed he will do whatever is necessary in order to restore the confidence of the financial markets in Italy," Alessandro Profumo, former head of Unicredit, Italy's largest bank, told Reuters.

Berlusconi, fighting an array of scandals and facing trials on charges ranging from tax fraud to paying for sex with an under-aged prostitute, had been under pressure to resign for weeks as the market crisis threatened to spin out of control.

International leaders including U.S. President Barack Obama, French President Nicolas Sarkozy and the head of the International Monetary Fund Christine Lagarde have expressed hopes a new government can be in place quickly.

Talks with Italian political parties are expected to begin on Sunday with hopes that a new government can be in place in time for the opening of financial markets on Monday.

However, even as preparations for a transition begin, signs of opposition have appeared, with Berlusconi's PDL party split between factions ready to accept a Monti government and others deeply opposed.

Berlusconi had a working lunch with Monti before the vote, suggesting the outgoing government will not try to block a quick handover, but the attitude of the center-right as a whole remains unclear.

The PDL's main coalition ally, the regional pro-devolution Northern League, has declared it will go into opposition, underlining the risk that the new government will lack the broad parliamentary support it will need to pass deep reforms.

"The convulsions in the center-right at the prospect of a government led by Mario Monti signal a danger: that a divided coalition may be tempted to unload its divisions on the country," the daily Corriere della Sera said.

The center-left Democratic party and smaller centrist parties have pledged support to Monti. Italy's main business and banking associations and some of the moderate trade unions have also called for a government of national unity.

In the end, Berlusconi's bravado proved no match for the euro-region debt crisis. With Berlusconi out, Monti and his team of technocrats will have their work cut out for them, just like Papademos and his new cabinet will in Greece. Nouriel Roubini tweeted this comment: "Berlusconi is gone. Good riddance. Not a moment too soon. Now Mario Monti has a chance to rescue Italy even if the challenges are formidable."

Good riddance indeed, and not a moment too soon for Greeks or Italians whose national dignity has suffered from the gaffes of their leaders. Will Monti and Papademos rescue Italy and Greece, and ultimately the eurozone? That all depends on Merkozy and actually more on Merkel. She now has two brilliant and credible technocrats running Europe's biggest basket cases.

If Merkel listens to them and they all do what's right for their citizens by coming up with a long-term solution to the debt crisis, then there is hope. But if all they do is pander to the banksters, usurping democracy, then the eurozone will implode and their policy blunders will bring on another global meltdown. Either way, in the near term, I am positioned for La Dolce Beta and bid farewell to "bunga bunga" Berlusconi. Bravo Grecia! Bravo Italia! Let's hope Germania follows the right path. Below, Russia Today's coverage of Berlusconi's exit.