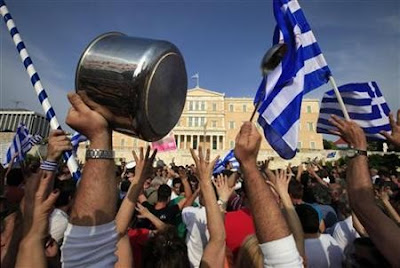 Over the last 24 hours, a couple of contacts have posed an intriguing question. Has the latest stage of the euro zone debt crisis been part of a cunning plan? Both Greece and Italy are forming technocratic governments and Berlusconi has finally gone. By the end of this week, indeed, the governments of all five countries in the PIIGS grouping (Portugal, Ireland, Italy, Greece and Spain) will have changed since the start of the crisis if, as expected, the ruling Socialists lose power in Spain. The prospects for economic reform in the peripheral European countries look a lot stronger than before.

Who is behind this plan? One could point the finger at Angela Merkel or at the European Central Bank; by not giving the peripheral nations a blank cheque from the German voters, or unlimited money creation, they have forced those nations to make hard choices.

If it is a plan, then, to quote Blackadder, it has been "more cunning than a fox who's been appointed Professor of Cunning at Oxford University". Until this autumn, the apparent aim of all the EU's rescue packages was to stop the crisis spreading to Italy and Spain; it has spread to both. Indeed, the borrowing costs of supposedly core countries like France and the Netherlands have been rising relative to those of Germany. Although it grew in Q3, the euro zone may now be in recession; that can hardly have been part of the plan.

If the EU leaders haven't had a coherent strategy, perhaps they have shown tactical nous. They outbluffed Papandreou on the referendum.* The ECB might have been as willing to make more substantial Italian bond purchases in recent weeks if Silvio had gone already; now they may press the accelerator. We may never know the answer as they seem unlikely to admit a strategy of playing favourites.

The individual EU leaders are playing a kind of 3-D chess in which they are having to deal with at least three variables; market reaction; domestic political reaction, and the likely actions of other players, including the ECB. It is easy for David Cameron (and indeed journalists) to slag them off from the sidelines since we are not faced with the actual responsibility of making the key decisions. Perhaps it is not surprising that their actions look more like desperate expedients than a cunning plan.

* Or perhaps Papandreou was being super cunning in finding a way to create a coalition government.

Unlike others, I think Papandreou knew exactly what he was doing when he took the political gamble of his life. It ended up costing him his seat, but in one fell swoop, he got a coalition government and exposed his chief political rival, Antonis Samaras, for the opportunistic hypocrite that he truly is. Mark my words, Samaras is finished.

And I laugh at articles depicting the rise and fall of a Greek prince. Don't count "Prince Papandreou" out forever. He's still around, lurking in the background, planning his next move. If it's one thing I learned about Greek politics, it's that anything can happen at any time. So far, Papademos is a welcome change but the rise of technocracy in Europe is a fragile compromise, especially if citizens feel that austerity is being rammed down their throats to pay off German and French bankers.

Importantly, Merkel's Greek gambit may backfire. If it's all about austerity and no focus on jobs and growth, unelected Eurocrats will be shown the door and policy blunders will lead to eurozone's implosion and another global meltdown. In fact, I believe Europe and the world's moment of truth has arrived and we're about to find out whether democracy is compatible with debt collection.

That's why I'm uneasy. As they "clean up" Occupy movements in the US, including the original one in NYC, the power elite are desperately scrambling to suppress freedom of expression and silence the voices of the restless many. But politicians better take note and stop pandering to their Wall Street masters because my prediction is that we are on the precipice of major social upheaval and if they continue bailing out banksters, they will all be fired. Once again, listen to euroskeptic Nigel Farage's dire warning below. He may not be as "nutty" as people think.