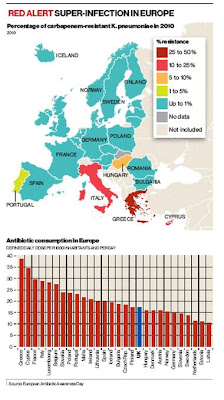 Edward Harrison of Credit Writedowns reports that the IMF to offer Italy a 600 billion euro bailout via ECB funding. Don't know if this latest rumor is true and don't really care. At this point, I'm convinced the bond market will break Merkel by pushing Germany to the precipice.

There is something else that caught my attention, however, and it has to do with something much more serious in terms of European "contagion." Jeremy Laurance of the Independent reports, Antibiotic-resistant infections spread through Europe (h/t Paul Kedrosky):


The world is being driven towards the "unthinkable scenario of untreatable infections", experts are warning, because of the growth of superbugs resistant to all antibiotics and the dwindling interest in developing new drugs to combat them.

Reports are increasing across Europe of patients with infections that are nearly impossible to treat. The European Centre for Disease Control and Prevention (ECDC) said yesterday that in some countries up to 50 per cent of cases of blood poisoning caused by one bug – K. pneumoniae, a common cause of urinary and respiratory conditions – were resistant to carbapenems, the most powerful class of antibiotics.

Across Europe, the percentage of carbapenem-resistant K. pneumoniae has doubled from 7 per cent to 15 per cent. The ECDC said it is "particularly worrying" because carbapenems are the last-line antibiotics for treatment of multi-drug-resistant infections.

Marc Sprenger, the director, said: "The situation is critical. We need to declare a war against these bacteria."

In 2009, carbapenem-resistant K. pneumoniae was established only in Greece, but by 2010, it had extended to Italy, Austria, Cyprus and Hungary. The bacterium is present in the intestinal tract and is transmitted by touch.

Resistant strains of E.coli also increased in 2010. Between 25 and 50 per cent of E.coli infections in Italy and Spain were resistant to fluoroquinolones in 2010, one of the most important antibiotics for treating the bacterium.

In the UK, 70 patients have been identified carrying NDM-1-containing bacteria, an enzyme that destroys carbapenems. Separate research has shown that more than 80 per cent of travellers returning from India to Europe carried the NDM gene in their gut.

Researchers speak of a "nightmare scenario" if the gene for NDM-1 production is spread more widely.

The UK Health Protection Agency warned doctors last month to abandon a drug usually used to treat a common sexually transmitted disease because it was no longer effective. The agency said that gonorrhoea – which caused 17,000 infections in 2009 – should be treated with two drugs instead of one and warned of a "very real threat of untreatable gonorrhoea in the future."

Discovering new medicines to treat resistant superbugs has proved increasingly difficult and costly – they are taken only for a short period and the commercial returns are low. The European Commission yesterday launched a plan to boost research into new antibiotics, by promising accelerated approval for new drugs and funding for development through the the Innovative Medicines Initiative, a public-private collaboration with the pharmaceutical industry.

World Health Organisation scientists warned two years ago that overuse of antibiotics risked returning the world to a pre-antibiotic era in which infections did not respond to treatment. The warnings have been ignored.

Professor Laura Piddock, president of the British Society of Antimicrobial Chemotherapy, said politicians and the public had been slow to appreciate the urgency of the situation. In The Lancet, she writes: "Antibiotics are not perceived as essential to health, despite such agents saving lives." Global action to develop new antibiotics is required, she says.

The Department of Health published guidance aimed at curbing the overuse of antibiotics in hospitals, by avoiding long treatment and replacing broad-spectrum antibiotics with those targeted at the specific infection. Professor Dame Sally Davies, Chief Medical Officer, said: "Many antibiotics are prescribed... when they don't need to be."

In August 2010, Paolo, 55, a university professor in Rome, was on holiday on the island of Ponza, when he fell ill with a fever and shaking chills. He had a urinary tract infection and his brother-in-law, a doctor, prescribed a commonly used antibiotic called ciprofloxacin.

Three days later he was no better and still feverish but continued with the drugs for a week. He returned to the mainland where his urine was tested and found to be infected with a strain of E.coli resistant to many antibiotics including ciprofloxacin.

He was prescribed a different antibiotic, which he took for four weeks. He got better but four days after stopping the treatment, his symptoms returned and he became feverish again.

He then called a friend, an infectious disease specialist, who suggested a third antibiotic which he took for 21 days. Two months after he began treatment, that finally cured his infection.

Nothing like drug resistant infectious diseases to cure humanity from all its socio-economic ills. And these infectious diseases do not discriminate between the meek and their masters, they just wipe out everyone in their path. Below, euronews reports on the threat of antibiotic resistance.