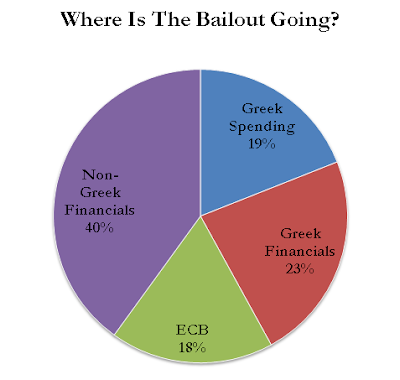 Once in a while Zero Hedge posts an excellent comment, like this one asking Where Does the Greek Bailout Money Go?:

Greece is about to get an installment of 8 billion Euro. I'm going to assume that is their quarterly installment.

Greece is running a primary deficit of about 6 billion Euro (as best as I can figure out). So that is 1.5 billion per quarter. So about 19 cents of every Euro of bailout money makes it way to fund Greece's current overspending.

As best as we can tell, Greek banks hold about 75 billion of debt and other Greek entities hold about 25 billion, bringing the total to 100 billion. Assuming about 350 billion in total debt (again somewhere in the ballpark), that means about 23 cents go to Greek entities as debt service. That number is a bit misleading, as much of this has been pledged to the ECB for funding, so although it supports the Greek banks, it also goes to the ECB.

The ECB holds 55 billion of Greek bonds directly. So 18 cents of every Euro of the bailout goes to the ECB.

The "market" and "bilateral loans" total about 175 billion from what we could find. This is a bit lower than the 205 billion the IIF is talking about, but seems in the right ballpark. So about 40 cents of every Euro of the bailout is used to service debt held by non Greek banks and financial institutions.

We didn't look at the specific maturities, and just used averages. To the extent Greek pension funds for example, hold longer dated maturities, less of the money is really going to them, but for now have assumed that each group holds a similarly balanced portfolio.

We also haven't figured out about the 90 billion of derivative exposures Greece has and whether any bailout money is being used to pay on those.

In the end less than 19 cents of the bailout are going to allow Greece to continue its overspending. About 23 cents goes to Greek institutions, though at this point, all of that is held by the ECB, so it is not fully benefiting Greece.

So yes, Greece is getting a bailout, but you can see why Merkozy got so scared at the idea of a referendum. The bulk of the money that Greece is "getting" comes right back to the rest of the EU. Whatever posturing is going on, Greece will get away without meeting any of its stated goals, or at least it will until the EU decides it has written down enough principal and that the ECB can handle the shock.

This is our first attempt at breaking down where the bailout money really goes. We have made a lot of assumptions and found data that seems sketchy at best, but will work on fixing any mistakes. We do think it is an interesting way to look at it, and confirms who really has the problem with a Greek default - and it's not Greece.

The bulk of the money that Greece is "getting" comes right back to the rest of the EU? Hardly a shocker! It's all about bailing out the banksters in France and Germany just like TARP was all about bailing out the banksters on Wall Street. Who else profits off the Greek "bailout"? Large European and US defense contractors who sell Greece billions in weapons. Of course, by the time the private equity and hedge fund vulture funds finish carving off what's left on the bones on the Greek carcass, there won't be much left to defend.

Welcome to the new world order run by Goldman Sachs' alumni. Go back and listen carefully to Michael Hudson on why democracy is incompatible with debt collection. Very few economists understand the real politics behind these "bailouts." It's more accurate to call them by their real name, corporate handouts to make sure the financial and defense kleptocrats continue raping the world, just as they have done and are doing with global pensions.

Don't worry, Silvio 'Balboa' Berlusconi is on his way out, and Papandreou and Samaras, the "Boston boys", will soon be joining him at his next "bunga-bunga" party in Mykonos. Markets will welcome the news, which is why I'm positioning myself for La Dolce Beta once again. It's a dirty world so try making money trading around these clowns (see funny clips below; will sort of miss him).