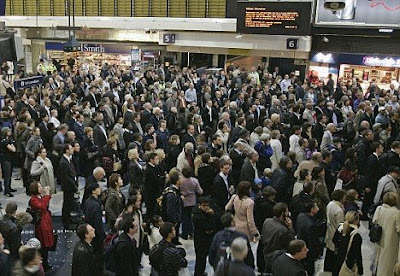 It's time to revisit global pension tension. Here are some of the stories covering the global assault on pensions:
The global pension crisis is really a crisis of modern day capitalism. If we don't figure out a long-term solution to this crisis, we risk having a new class of elderly poor who were cheated out of their pensions.

Global pension tension will not vanish. We are better off holding a summit to look into pensions and think of ways of bolstering retirement plans for future generations. Waiting for the 'markets' to rectify this crisis is like waiting to win the lottery. You might be lucky but who wants to gamble away the retirement dreams of millions of workers?

An Update on OMERS and AIMCo's Private Equity Programs

Michael Graham, Global Head of OMERS Private Equity posted a message updating members on their activities: There are many things top of mind as we navigate through what is now a markedly different world than just a few months ago. Global markets (debt and equity) are in flux, with inflation in many countries at record highs and a potential recession causing uncertainty. Debt is more expensive and there are fewer capital sources lending than last with the syndicated loan market largely closed. Overall, these factors are causing (necessary) cooling in the PE industry. There is a growing reluctance by many of our peers to “spend up” or to deploy new capital at all in the last half of 2022. On the positive side, our portfolio continues to perform well, with most companies showing strong growth in 2022 . And many PE funds still have high levels of dry powder, but they are cautious on valuations and assets that aren’t traditionally recession resilient and are looking for “supe
Read more