Showing posts from February, 2018
Show all

Canadian Pensions Cranking Up The Leverage? 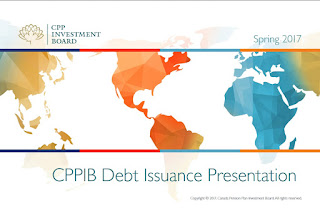 Kate Allen of the Financail Times reports, Canadian pension fund issues €1bn, 15-year bond: Some of the world’s largest pension funds have begun to issue bonds, with the Canada Pension Plan Investment Board today raising €1bn in 15-year debt in the latest example of the growing trend.

CPPIB’s deal — priced at a 1.5 per cent fixed annual coupon — is its second euro-denominated debt-raising, after a €2bn deal last June. The order book topped €4.6bn.

Globally pension funds have issued $28bn of syndicated bonds since 2014 according to figures from data provider Dealogic. The largest proportion of that total — $11.1bn — has been denominated in US dollars, with Canadian dollars close behind at $8bn.

CPPIB has been by far the most active pension fund in the capital markets to date, having raised nearly $12bn in debt before today, according to Dealogic data.

Canada’s Public Sector Pension Investment Board, the Ontario Pension Board and the Ontario Teachers’ Pension Plan have all also tapped the …
Post a Comment
Read more

Should Pensions Divest From Tobacco? 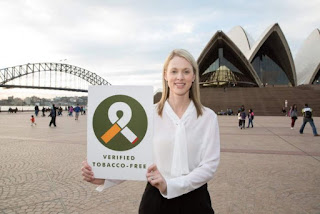 Back in June, Del Irani of ABC News Breakfast in Australia published an article, Meet the doctor hitting big tobacco where it hurts:
"Are you telling me I'm currently investing in tobacco?!"

At a coffee meeting with her super fund representative, she discovered — by accident — that her money was being invested in big tobacco.

"I was just so taken aback because I'd been a doctor then for 10 years and had superannuation for 10 years," she told News Breakfast.

A turning point for the good doctor

Dr King's voice trembles when she reflects on the horror she felt at that moment.

Up until that point she had never really paid any attention to her super. 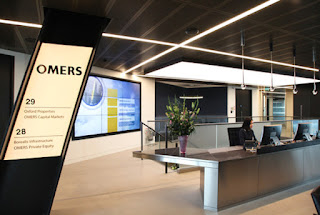 During a press conference in Toronto on Friday, Jonathan Simmons, the pension fund’s chief financial officer, said the double-digit returns have allowed OMERS to reduce its discount rate by a further 20 basis points in 2017. Though it will cost $2.7 billion, Simmons added it’s the right thing to do.

During the year, OMERS decreased its exposure to inflation-linked bonds, to four per cent in 2017 from six per cen…
Post a Comment
Read more

The Fed's Balance of Risks? 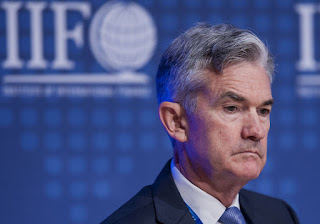 "Valuation pressures continue to be elevated across a range of asset classes, including equities and commercial real estate," the report said. "Over the second half of 2017, valuation pressures edged up from already elevated levels. In general, valuations are higher than would be expected based solely on the current level of longer-term Treasury yields."

The Fed noted the price-earnings ratios for U.S. stocks were "close to their highest levels outside of the 1990s."

The central bank's "elevated" valuation comments are noteworthy given the market has sold off since late January. The S&P 500 has declined 4 percent in February through Thursday. David Ader wrote a comment for Bloomberg, Too Much is Being Made of the Bearish Bond Data (click on images to enlarge):
“The sky is falling; the sky is falling!” Substitute “bond prices” for “sky” and you’ll have a sense of the mood in the fixed-income market the last few months.

I won’t diminish the potential bearish impact the swelling U.S. budget deficit will have on the bond market as supply surges in the months and years to come. But we don’t know how much it will affect the market if there is no accompanying increase in inflation and gross domestic product. Still, that hasn’t stopped people from making too much of bearish data, while ignoring a soft underbelly that challenges the bearish narratives. That’s what I’m about to do.

Certainly, five increases in the federal funds rate since December 2015 and the doubling in 10-year Treasury note yields since mid-2016 would constitute a bear market by any measure, but what I suspect is coming is more of a teddy-bear market tha…
Post a Comment
Read more

Jacob Serebrin of the Montreal Gazette reports, Caisse posts $24.6-billion profit, says it's ready for market correction:
The head of the Caisse de dépôt et placement du Québec said he believes a market correction is coming but that the provincial pension fund manager is much better prepared than it was in 2008.

While corporate profits have risen, Michael Sabia, the president and CEO of the Caisse, said the market returns that reflect future expectations are rising faster.

And that is leading to a more fragile market, he said Wednesday.

This time, Sabia said, the fund manager sees a correction as an opportunity.

“Unlike the situation of la Caisse in 2008 and 2009, where we did not have any room to manoeuvre, we were not able to move assets and capital to benefit from the resurgence of the markets,” he said. “This time, we are prepared. This time, we have the flexibility to move substantial capital in a highly liquid way from one or two a…
Post a Comment
Read more
More posts