Showing posts from December, 2019
Show all

Jed Graham of Investor's Business Daily reports on the stock market forecast for 2020 stating clears skies from the Fed, China trade deal but 2020 election clouds loom: The stock market forecast for 2020 looks bright to start the new year. The Dow Jones Industrial Average, S&P 500 and Nasdaq composite hit record high after record high in late 2019. The stock market rally kicked into higher gear as the Fed switched to cutting rates and a China trade war truce took hold. Stock market bulls are betting that business investment, corporate earnings and emerging market economies will now revive. The momentum for the stock market rally and Trump economy should carry through at least mid-2020. Then Wall Street will turn its focus to the outcome of the 2020 election — with the risk of a major U-turn in tax and regulatory policy — and reassess the chances of a new Fed rate-hike cycle. Apple (AAPL) and chips such as Advanced Micro Devices (AMD) and Nvidia (NVDA) are expected t
Post a Comment
Read more

Beware of Euphoria in US Stocks? 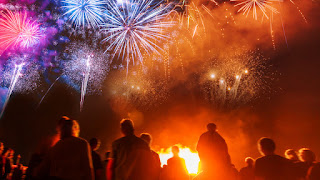 Sarah Poncek of Bloomberg thinks maybe it's time to start worrying about euphoria in US stocks: Mom and pop are rushing back to risk. The ultra-rich want in. Positioning in bellwether mutual funds has virtually never been so bullish. This as the S&P 500 has surged 11% in less than three months. Word is getting around about stocks, music to the ears of anyone who sells or manages them. But if you’re the type of market contrarian who thinks a better backdrop for gains is gloom, all the elation is worrying. “Investors jump on momentum and ride the rally and then become convinced that it’s going to continue forever,” said Aron Pataki, a portfolio manager at Newton Investment Management, which overseas about $62 billion in assets. “Typically, there is euphoria before pullbacks.” Not that enthusiasm isn’t warranted. The S&P 500 is up 30% this year with dividends. People who stress about euphoria can sound like they’re complaining about a rising market. It’s just that
Post a Comment
Read more 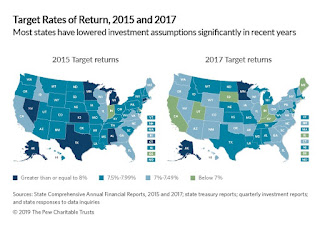 Pew Charitable Trusts just released an issue brief stating state pension funds are lowering their assumed rates of return: State and local public employee retirement systems in the United States manage over $4.3 trillion in public pension fund investments, with returns on these assets accounting for more than 60 cents of every dollar available to pay promised benefits. About three-quarters of these assets are held in what are often called risky assets—stocks and alternative investments, including private equities, hedge funds, real estate, and commodities. These investments offer potentially higher long-term returns, but their values fluctuate with ups and downs in financial markets in the short term and the broader economy over the long run. Financial analysts now expect public pension fund returns over the next two decades to be more than a full percentage point lower than those of the past, based on forecasts for lower-than-historical interest rates and economic growth. Rese
Post a Comment
Read more
More posts