Showing posts from September, 2021
Show all

Reflections on Truth and Reconciliation 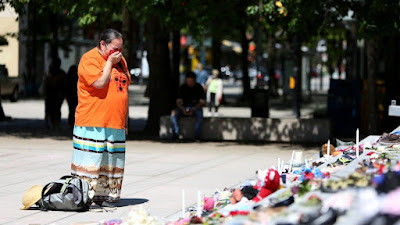 Giulia Cirillo, Senior Vice President & Chief Human Resources and Global Communications Officer at PSP Investments posted a comment on LinkedIn , The National Day for Truth and Reconciliation—a time for recognition, respect and awareness : The first annual National Day for Truth and Reconciliation acknowledges and pays respect to the contributions made by Indigenous communities throughout Canada’s history. It also renders more visible the deep red line that highlights a tragic reality whose magnitude we are only beginning to fully understand and recognize.  Earlier this year, headlines around the world focused on the discovery of hundreds of children’s unmarked graves near the sites of residential schools. Because of poor record-keeping, the true number of children’s deaths remains unknown, but it is believed to be much higher than reported. These grim discoveries shed light on the consequences of past measures taken to assimilate Indigenous Peoples, their cultures and l
Post a Comment
Read more

CPPIB to Become Owner of Largest US Terminal Operator 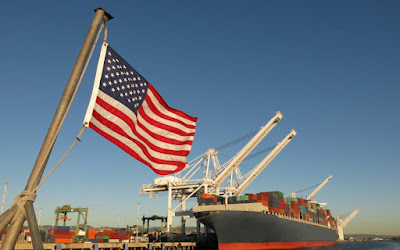 David Milstead of the Globe and Mail reports CPPIB strikes multibillion-dollar deal to buy marine terminal operator Ports America: CPPIB will acquire Ports America, a 100-year-old New Jersey company with 70 locations in 33 ports on the U.S. west, east and southern coasts, from current owner Oaktree Capital Management LP. Oaktree is an affiliate of Canadian investment giant Brookfield Asset Management Inc. A source familiar with the transaction said the deal values Ports America at more than US$4-billion, including its outstanding debt. The Globe is not identifying the source because the parties had agreed not to publicly disclose the price, the source said. CPPIB was a minority owner of Ports America prior to Wednesday’s announcement, thanks to a 10-per-cent stake in the company obtained when it provided a loan to the company in 2014. Global supply chains have been deeply disrupted by COVID-19, and container shipping via boat has not been exempt. Shipping rates have skyrocketed
Post a Comment
Read more 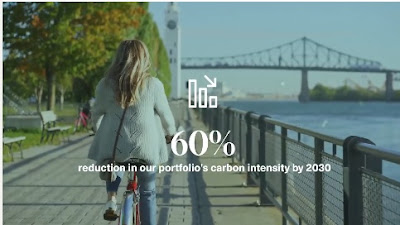 Today, CDPQ announced its new climate strategy: Caisse de dépôt et placement du Québec (CDPQ), a global investment group, announced today its ambitious new plan to fight climate change. Since implementing the organization’s first climate strategy in   2017, CDPQ has surpassed its targets and is now looking to build on this experience to intensify its efforts in achieving a net-zero portfolio by   2050. Leveraging the expertise its teams have acquired over the past several years, CDPQ is basing its new climate strategy on four vital and complementary pillars to meet the transition’s major challenges. Two of these pillars build upon the organization’s accomplishments since   2017 while increasing its   ambition: 1. Hold $54   billion in green assets by   2025 to actively contribute to a more sustainable economy.  2. Achieve a 60%   reduction in the carbon intensity of the total portfolio by   2030. Two new pillars have been added to move CDPQ’
Post a Comment
Read more 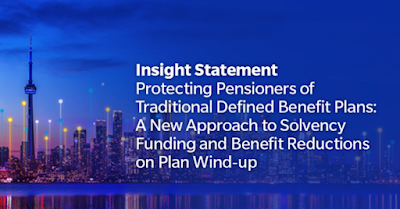 Serge Charbonneau and Joseph Nunes of the Canadian Institute of Actuaries put out an insight paper on reimagining pension solvency funding: In Canada, pension promises made to employees by employers are not guaranteed by insurance contracts. Rather, they are secured by requiring that the employer set aside assets in a pension fund independent of the employer, which delivers future pension promises should the employer lose the ability to support the pensions with enterprise assets. Where the current system falls short, however, is when an employer goes out of business and a pension plan becomes wound up. Scenarios like this often run the risk that the assets set aside to deliver the promised pensions may not be sufficient, resulting in negative consequences for plan members, especially retirees who are without the means to replace lost retirement income from other sources. The question begs: Is there is a better approach to addressing underfunded pension plans? We exp
Post a Comment
Read more
More posts 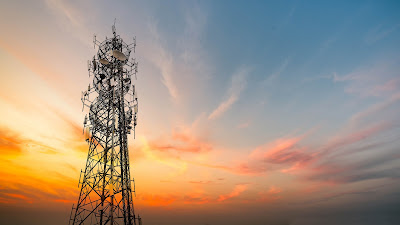