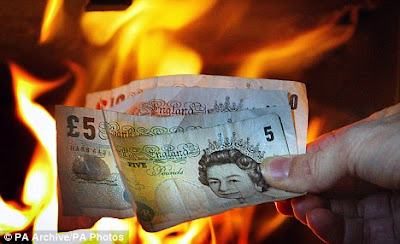 Here is some food for thought. The Independent reports that a a senior Labour backbencher is calling for a £50,000 a year cap on public sector pensions:

Pensions for public sector workers should be capped at around £50,000 a year, a senior Labour backbencher suggested today.

With salaries for the best-paid executives in the civil service and local government soaring in recent years to as much as £250,000 a year, pension entitlements have risen in some cases to "excessive" levels, said Terry Rooney, the chairman of the House of Commons Work and Pensions Committee.

His proposal of a cap could prove controversial, with unions representing senior public servants likely to resist any restriction on pensions.

"I think most people would think that that was excessive.

The "gold-plated" pensions available in the public sector have become increasingly controversial as a growing number of private sector companies have closed down their generous final-salary schemes and moved staff onto more risky schemes linked to the stock market.

And a recent report suggested that the total taxpayer liability for future public sector pensions may be higher than £1 trillion.

UK specialist insurer Pension Corporation is eyeing a third capital raising round of up to 400 million pounds ($652.7 million) from new and existing investors, the Financial Times reported on Friday.

Citing people close to the privately-owned specialist pension buy-out and insurance company, the FT said the capital would be used to back new deals taking over liabilities of closed pension schemes, books of pensions in payment, or deferred pensions.

JPMorgan is co-ordinating the capital raising and might add to the money it put in during Pension Corp's second capital raising last year, which gave it about 5 per cent of the group.

Pension buy-outs were once dominated by Prudential and Legal & General until a number of smaller, specialist firms, usually backed by private equity, entered the field earlier this decade.

Pension Corp recently tried to buy rival Paternoster, one of the first such companies to set up which is run by Mark Wood, the former Prudential executive. That deal failed and Paternoster is now restricted from pursuing new business due to a lack of spare capital.

Pension Corp hopes to raise fresh money potentially in the form of equity and long-term junior debt, while the rest of the capital would be lined up as commitments for when deals are done.

One person familiar with the company said that it had spare capital, but "was seeing more large deals coming its way and that prospective counterparties wanted increased certainty it would have the extra capital needed to support a deal."

New York Comptroller Thomas DiNapoli said Thursday that state and local governments, and their taxpayers, will need to pay far more into the state's public worker pension fund, which lost about 25 percent of its value in the global financial meltdown.

The government contributions will increase to 11.9 percent of payroll for most workers in 2011, and 18.2 percent for police and firefighters whose pensions are more expensive. While the fund has regained some value with recent stock rebounds, public costs are expected to keep climbing.

"We're going to see more pressure for additional increases past this one," DiNapoli said. "A lot of it's driven by performance. It really depends on how we do this fiscal year."

The 2011 increases followed five years of rate cuts as fund investments grew. The rates are set to drop next year to 7.4 percent of payroll that state, county and municipal governments pay for most employees, and 15.1 percent for firefighters and police.

"It's simply terrible news, a doubling of the pension rate at a terrible time," said Stephen Acquario, executive director of the New York State Association of Counties. The counties paid $337 million in 2008, he said, with costs projected to rise to 24 percent of payroll by 2012. "That's staggering."

A doubling of the pension rate is terrible news? I got a better idea, why don't we also cap public sector pensions in North America? Any politician courageous enough to propose this idea here? Of course, that means a cut in their own gold plated pensions.

Jim Keohane Warns: "We Are in a Mania Phase" 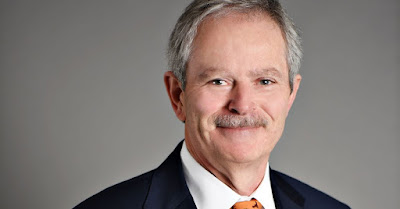 Caroline Cakebread of the Canadian Leadership Congress interviewed HOOPP's former CEO and current member of AIMCo's board of directors, Jim Keohane, on market manias and lessons learned:  We are thrilled to be able to honour the career of veteran investor, Jim Keohane, at the CLC’s upcoming Challenge of Change Forum in Vancouver, from October 13-15. Jim was president and CEO of the Healthcare of Ontario Pension Plan (HOOPP) from 2011 until his recent retirement in March 2020 and now, he serves on AIMCo’s board of directors. He is widely viewed as a pioneer in the risk management space and was the architect of HOOPP’s liability-driven investment strategy. We were able to sit down with Jim in advance of the event (thanks to Zoom) and talk to him about what he’s learned through his career, discuss his thoughts on what’s happening in markets today and to ask the question, what if the uptick in inflation isn’t temporary? What was the biggest challenge you ever faced in
Read more 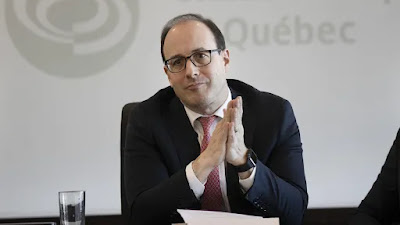 CDPQ released its results for the first half of the year, gaining 5.6% for the first six months and 8.5% over the last five years: Net depositor assets reach $390   billion, with investment results in excess of $20   billion over six   months The six-month, five-year and ten-year returns are all above the benchmark portfolio Ongoing strategic initiatives in the Real Estate and Equity Markets portfolios deliver good   results Caisse de dépôt et placement du Québec (CDPQ) today presented an update of its performance as at June   30,   2021. Over six months, CDPQ posted a return of   5.6%, outperforming its benchmark index’s 4.4%   return. Over five years, CDPQ generated an annualized return of   8.5%, compared to   8.3% for its benchmark index, and produced $126   billion in investment results. Over ten years, CDPQ’s annualized return was   8.8%, also above its benchmark portfolio, which stood at 8.3%
Read more

The Inclusive Transition to Net Zero Is the Only Way Forward 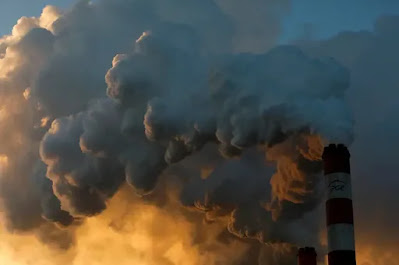 Hendrik du Toit and Katherine Tweedie of Ninety One sent me a guest comment on how the drive to avert harmful climate change needs global inclusiveness to achieve total net zero: Our firm is committed to the goal of net zero carbon emissions by 2050. But we will not pretend that decarbonizing portfolios is the same as decarbonizing the real world. It is time to be honest with ourselves, for the sake of the planet. While we are a global investment manager, we are dual-listed in London and Johannesburg, rooted in South Africa and the first firm from an emerging market to sign up to the Net Zero Asset Managers Initiative. We joined the NZAMI because we believe we have at least two important responsibilities. To help make the case for curbing harmful climate change. And to help make the case for a fair transition to a net zero that will work for all the markets of the world. The Net Zero Asset Managers Initiative has attracted 128 signatories, managing a combined $43 trillion.
Read more

PSP Investments' CIO on the Relevance of the Canadian Model 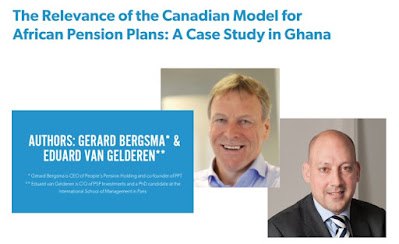 PSP Investments' CIO, Eduard van Gelderen, shared a paper he co-authored with Gerard Bergsma in the July issue of the ISM Journal for International Business analyzing the Canadian model for African pensions plans, especially in Ghana: Abstract Among the different investment models around the world, the Canadian model is considered one of the most successful. Having its origin in the restructuring of the Ontario pension plan in the nineties, this model has performed strongly over the last few decades. The Canadian model is a combination of single purpose, strong governance, and internally managed investment . The report “ The evolution of the Canadian pension model; practical lessons for building world-class pension organizations ” not only describes the merits of the Canadian model in great detail, but it also suggests that this model could serve as a blueprint for other pension funds. More specifically, it emphasizes the relevance of this model for new pension funds in eme
Read more 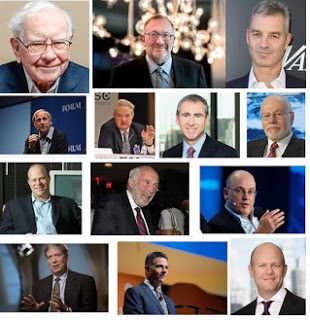 Devon Pendleton of Bloomberg reports Stanley Druckenmiller exits Citi as family offices reveal stock picks: Stanley Druckenmiller is hedging his bets on the pandemic recovery. The investor, worth $10.4 billion according to the Bloomberg Billionaires Index , snapped up stocks last quarter that would get a boost as the U.S. economy emerges from Covid. His Duquesne Family Office bought Airbnb Inc. and Marriott International Inc., while adding to its holdings of Expedia Group Inc. and Starbucks Corp., according to its latest 13F filing. The firm also acquired a $91 million position in Netflix Inc. and a $52.3 million stake in vaccine maker Moderna Inc. In total, the family office disclosed almost $3.5 billion in U.S. equities, down $400 million from the prior period. The largest exit was a $154.6 million position in Citigroup Inc. which Duquesne acquired in the first quarter. Family offices, which oversee the money and personal affairs of the world’s ul
Read more 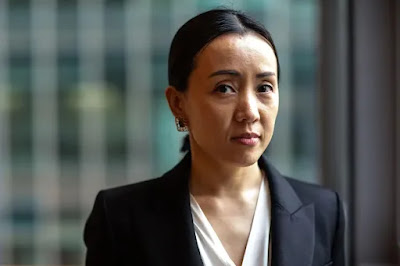 The Evolution of ESG at PSP Investments 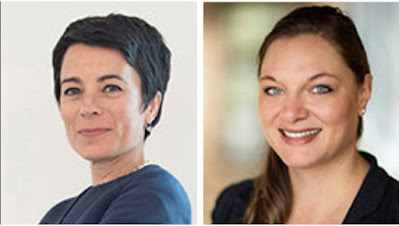 Alicia McElhaney of Institutional Investor reports on why PSP Investments is good at ESG: Pension funds that develop environmental, social, and governance frameworks without government interference tend to have an easier time incorporating those programs into their investment process.  This is just one of the conclusions of a recently published paper entitled “ The Origins of ESG in Pensions: Strategies and Outcomes ,” which included an analysis of how Canada’s Public Sector Pension Investment Board has been incorporating ESG into its portfolio since 2001.  The C$204.5 billion ($162.6 billion) fund served as a case study for researchers Judith Stroehle, the research and program lead for the Oxford Said Initiative on Rethinking Performance at the University of Oxford’s business school, and Stéphanie Lachance, a managing director for PSP’s responsible investments team.  “We find that the regulatory environment of pensions is not always a supporting factor for the integratio
Read more 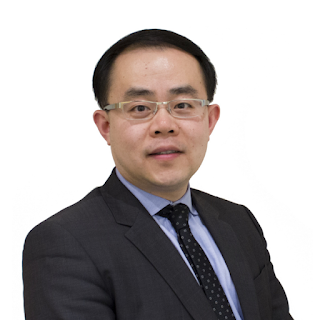 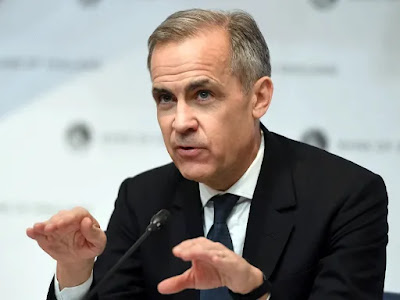 OMERS To Leverage AI in Strategic Partnership With the Vector Institute 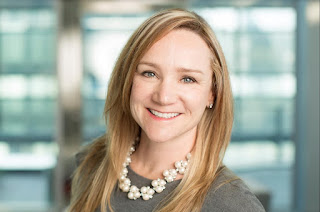 OMERS released a press release today on how it is collaborating with the Vector Institute on AI: OMERS and the Vector Institute are entering a five-year strategic engagement that will see the two organizations collaborate, benefiting the pension plan and contributing to the work of the Canadian artificial intelligence (AI) ecosystem. Among the Vector Institute’s existing participant group from across financial services and other sectors of the Canadian economy, OMERS is the first pension plan to participate, building on AI progress that is underway across the organization. “In the last few years, we have made great progress in leveraging data and technology and there is strong appetite to continue to build on our ability to harness the power of data and insights to support growth and value for our members. To that end, we have established a reliable framework, developing a solid data foundation that we can trust and use responsibly,” said Monique Allen, Executive Vice P
Read more