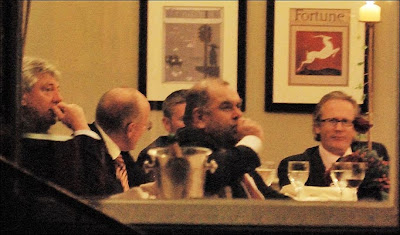 Raghuram Rajan, professor of finance at the University of Chicago, and former chief economist at the International Monetary Fund was interviewed on Yahoo Tech Ticker peddling a message for Washington, Stop Targeting "Greedy Bankers" and Focus on Growth:

The euro fell to an 18-month low Friday amid growing concerns about Europe's finances. Less than a week after the EU and IMF announced a whopping $1 trillion bailout package for Europe's so-called PIIGS, a growing number of high-profile voices, including Paul Volcker and Jimmy Rogers, are raising doubts about the euro's future.

A natural question: Is U.S. the next Greece -- as former guest Peter Schiff has stated, and economist James Galbraith has disputed?

"I would say the parallel is more with the euro area as a whole than with Greece," says our guest Raghuram Rajan, professor of finance at the University of Chicago, and former chief economist at the International Monetary Fund.

European nations, Greece especially, went on a spending binge. "You basically gave a drunkard a credit card. He went out and spent like mad," Rajan says.

Some pundits say America is on the same financial trajectory. "What the U.S. has as the same lines as Greece is this, or the euro area I should say, is the constant bailing out of anything that goes wrong," says Rajan, author of a new book, "Fault Lines: How Hidden Fractures Still Threaten the World Economy."

But bailouts aren't the answer. Furthermore, "we've used all our bullets. We don't have any bullets left," Rajan recently told The New Yorker.

In "Fault Lines", Rajan makes the case that without a clear growth strategy, America eventually faces tough decisions -- higher taxes or budget cuts, or a combination of the two as Spain and Portugal announced this week.

"We are in for tougher political times," he tells Aaron in the accompanying clip. "And I think focusing on some of the greedy bankers as the answer to the crisis takes political heat off the politicians, but is not really the answer."

Watch the interview below to get Mr. Rajan's take on how energy policy -- including a carbon tax -- could help spark America's economic growth.

An Update on OMERS and AIMCo's Private Equity Programs

Michael Graham, Global Head of OMERS Private Equity posted a message updating members on their activities: There are many things top of mind as we navigate through what is now a markedly different world than just a few months ago. Global markets (debt and equity) are in flux, with inflation in many countries at record highs and a potential recession causing uncertainty. Debt is more expensive and there are fewer capital sources lending than last with the syndicated loan market largely closed. Overall, these factors are causing (necessary) cooling in the PE industry. There is a growing reluctance by many of our peers to “spend up” or to deploy new capital at all in the last half of 2022. On the positive side, our portfolio continues to perform well, with most companies showing strong growth in 2022 . And many PE funds still have high levels of dry powder, but they are cautious on valuations and assets that aren’t traditionally recession resilient and are looking for “supe
Read more