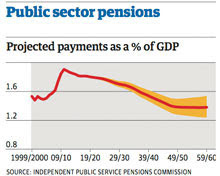 Patrick Collinson of the Guardian blogs, Despite public sector pension reform the burden is getting lighter:

In the fantasy world of right-wing commentators, a bloated public sector has saddled the taxpayer with a £1tn liability for lavish pension payouts for town hall pen-pushers.

But in the real world, public sector workers are entitled to say: "Pensions crisis? What crisis?". On page 23 of this week's 200-page Hutton report there is a projection of how much public sector pensions will cost as a percentage of GDP in future years. I've reproduced it below. Even taking into account different assumptions for life expectancy and workforce growth, the cost of public sector pensions has peaked, and between now and 2060 will fall year in, year out.

Even in the worst-case cost scenario, where we all live longer and workers survive Osborne's axe, in 2060 public sector pensions will cost around 1.5% of the GDP, compared with 1.9% today.

The truth is that public sector pensions have, over the past decade, been trimmed back again and again, so the potential future burden has already reduced. Many schemes have increased the age at which members can take their pension. Higher contribution rates from 2012, likely to average 3%, have already been announced and will save around £2.8bn from the public purse. The biggest cut (or fiddle, many would argue) has been the switch from using RPI to CPI for cost-of-living increases once the worker has retired.

So why is Lord Hutton, a Labour peer, so keen to ally with the Tories and cut even further?

His basic rationale is fairness. In the 1950s, after a career in the NHS a woman could expect to spend around 30% of her adult life in retirement. Today the same NHS worker will spend 45% of her adult life in retirement. Then, public sector workers generally earned less than workers in the private sector. Today, they generally earn the same or more. They live longer, too. A graph on page 109 of the report shows that, at age 60, the typical worker (male or female) who has had a job in the public sector will live three to four years more than the average.

Hutton wants a fair rebalancing between the private and public sectors. Despite reports, he didn't explicitly call for an increase in contribution rates. Instead he says the public sector should keep the safety net of a guaranteed pension, but base it on average earnings over a working life, rather than the salary in the final year.

The main losers from this will be high-flyers in the public sector, such as town hall chiefs, who spend their final years in high-salaried positions. They are hugely burdensome on the public sector – a £70,000-a-year pension costs £2m to finance. That these people should be asked to contribute more or accept less seems only fair.

Most private sector workers would be seriously grateful for a career-average pension. Now that Hutton has completed his look at the public sector, can he campaign for private employers to bring in career average schemes?

It's right to fight against higher contribution rates for lower-paid workers. Fight, too, against the sneaky switch to CPI from RPI. But fight against a career average scheme? Fight against retiring at the same age as private sector workers? It's not worth the battle.

This is an excellent comment because it tones down the rhetoric of the "pension crisis". I do think there is an element of fairness that Hutton is trying to establish with these proposals, but how much savings are you going to get by moving towards career average schemes? As you can see, it won't make a huge difference as public sector pension costs have already peaked. So why go though with these reforms? The government is using austerity measures to cut costs wherever it can, including public pensions. But I agree with Mr. Collinson, this battle isn't worth it.