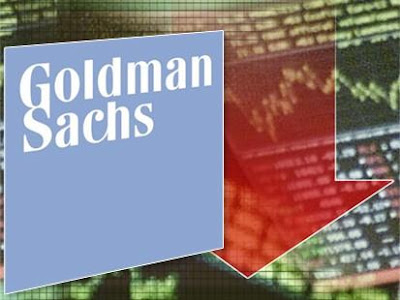 If you missed CNN's In The Arena on Thursday evening, then you missed the fireworks. Eliot Spitzer challenged investment banker Goldman Sachs: "Sue me. You lied to the public. You should be prosecuted" during an interview with Sen. Carl Levin, chairman of the Senate subcommittee charged with investigating the causes of the financial crisis (see interview below).

Obviously Spitzer doesn't care much for Goldman Sachs and he doesn't hide his political views, openly questioning why Republicans are moving back towards financial deregulation. Is Spitzer wrong to go after Goldman? It's a tough case to prove. I clearly remember doing research on CDO-Squared and CDO-Cubed in the summer of 2006. The more I looked into these "special purpose vehicles," the more certain I was that the credit bubble was going to collapse. I could never have imagined how bad it was going to be, but I was sure the bubble was going to end badly.

I also remember sending an email to Goldman asking them the best way to short this credit bubble. The guy covering us called me back and asked me "why would you want to do that?". That I remember -- crystal clear in my head. I remember the research I did, and I remember the response. It may have been that at that time Goldman was still long and genuinely thought that it wasn't worth shorting these CDOs.

But at one point, Goldman placed "The Big Short" and profited from the financial calamity that ensued. Did they lie to their clients? That is going to be tough to prove but I can tell you one thing, somewhere along the way, they reversed course and went short credit in a big way. I'd like to know why they didn't share this information with all their clients?

And it's not just Goldman. They're everyone's favorite whipping boy but other investment banks engaged in equally questionable transactions, selling CDOs and other structured crap to pension funds (who blindly bought the crap!). The other investment banks just weren't smart enough to reverse course at the right time, and they paid the price. Love them or hate them, Goldman Sachs is a money making machine. They seem to know exactly when to take the big risks, and the firm's reputation is such that clients still want to do business with them (even clients that hate them). They got smart people working for them and they do an outstanding job servicing clients.

And what about increasing regulation? There is no question we need better regulation, but I also know that bankers are running rings around regulators. I chuckle when I hear politicians in Canada saying they're going to "increase taxes on the major banks". Good luck! If you do that, banks will shed costs (fire people) and increase their tax arbitrage activities which already makes them a killing. Bankers are always two steps ahead of regulators.

That brings me to my final point, pension oversight. The people overseeing pension funds should be qualified enough to know when pension fund managers are taking stupid risks. There are no excuses. If they aren't capable of asking the tough questions, and safeguarding pension assets, then they shouldn't be supervising any pension fund. 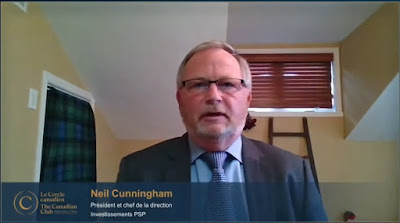 Earlier today, the Canadian Club of Montreal hosted a virtual event with Neil Cunningham, President and CEO of PSP Investments.  It's very rare that you will see Neil or any senior manager at PSP give an interview like this, so I pounced on the opportunity to listen to this a couple of times. First, what I like about Neil is what you see is what you get. If he comes across as a solid leader who is nice, thoughtful and down to earth, it's because that's how he is when you meet him and that's how I remember him since the time we worked together back in 2005-06. Neil knows his stuff, he doesn't need to prove anything to anyone but he's always looking to learn and improve processes and the experience of working at PSP. He began by stating it was four years ago that the Canadian Club of Montreal interviewed his predecessor André Bourbonnais who discussed expanding PSP's global footprint.  "Since then, we opened New York, Hong Kong and London and have over 1
Read more

Are Canadian Pensions on the ESG Bandwagon? 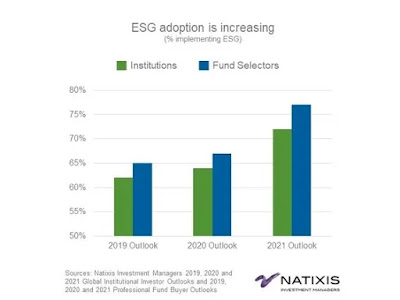 Natixis Investment Managers put out a press release highlighting results of a survey showing that ESG investing has reached critical mass but ongoing momentum depends on what's driving the demand: The number of professional investors implementing ESG grew by 18% since 2018, primarily to better align private capital with investor and organizational values Three-quarters of professional investors consider ESG factors to be an integral part of sound investing Natixis surveys show a 51% increase in institutional investors exercising active ownership influence over corporate behavior BOSTON — More financial institutions are deploying a broader range of environmental, social and governance (ESG) strategies 1 to meet rising demand for more sustainable investments, according to survey findings released today by Natixis Investment Managers. Approximately three-quarters of professional investors, including 72% of institutional investors and 77% of the gatekeepers who select funds
Read more 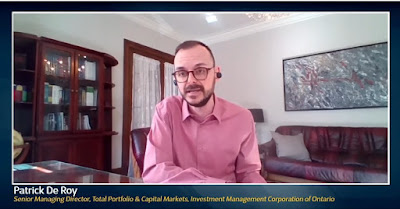 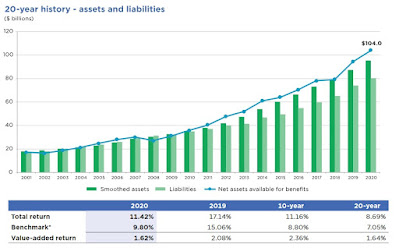 HOOPP released its 2020 results posting strong gains that allow for benefit improvement for active members: The Healthcare of Ontario Pension Plan (HOOPP) announced today that it generated an 11.42% rate of return in 2020. In addition, it surpassed the $100 billion asset milestone, closing the year at $104.0 billion in net assets, up from $94.1 billion at the end of 2019. The Plan’s funded status is 119%, meaning that for every dollar it owes in pensions it has $1.19 in assets. HOOPP has a 10-year annualized rate of return of 11.16%. In its latest report, consulting firm CEM Benchmarking found that HOOPP’s 10-year results were among the highest of pension plans worldwide, and was highest among CEM’s Canadian data set of 66 pension funds. “HOOPP is very pleased to have delivered strong results for our members in the Ontario healthcare sector, and to have done so during what remains an extremely challenging time for them,” said Jeff Wendling, President and CEO, HOOPP. “It
Read more

Ontario Teachers' Pension Plan released its 2020 results, delivering a strong total fund net return of 8.6%: Ontario Teachers’ Pension Plan Board (Ontario Teachers’) today announced a total-fund net return of 8.6% for the year. Net assets reached $221.2 billion as at December 31, 2020, a $13.8 billion increase from a year earlier. Ontario Teachers’ earned $18.0 billion in investment income in 2020. “Our portfolio proved to be very resilient during a turbulent year. Through the headwinds of a global pandemic and volatile investment landscape, we delivered strong financial results and high service levels for our members,” said Jo Taylor , President and Chief Executive Officer. “Our ability to navigate the many challenges posed in 2020 was anchored around the skill, agility and application of our team, which augurs well for the future despite the ongoing market uncertainties.” As of January 1, 2021, the plan was fully funded for an eighth consecutive year with a pre
Read more

AIMCo Appoints Evan Siddall as its Next CEO 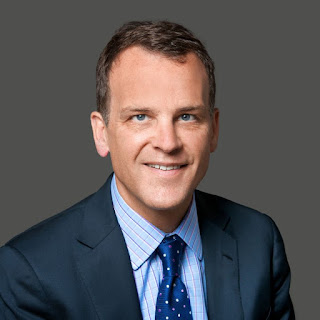 Ian Vandaelle of BNN Bloomberg reports AIMCo taps former CMHC head Evan Siddall as next CEO: Former Canada Mortgage and Housing Corporation Chief Executive Officer Evan Siddall has been named the next chief executive officer of Alberta’s largest pension fund manager. In a release Thursday, the Alberta Investment Management Corporation (AIMCo) announced Siddall will become CEO effective July 1, 2021; he will succeed Kevin Uebelein, who has held the position for six years. In the release, AIMCo Chair Mark Wiseman praised Siddall’s deep knowledge of the financial services industry and said his experience running the nation’s housing watchdog should serve him well in the new role. “Evan is an executive who is ready to drive the organization forward with an exceptional focus on clients, commitment to collaboration, and deep knowledge of financial services. The board and I look forward to working in partnership with him in this exciting new chapter for AIMCo,” Wiseman said.
Read more 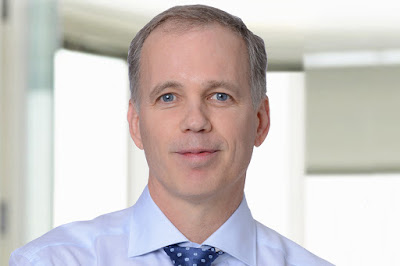 Tim Kiladze of the Globe and Mail reports CPPIB restructures largest investment group and parts ways with group leaders early in new CEO’s tenure: The investment arm of the Canada Pension Plan is restructuring its largest group by assets, according to internal memos, marking the fund manager’s first substantial changes under newly appointed chief executive officer John Graham. The Canada Pension Plan Investment Board is also revising its senior ranks, with at least three managing directors departing. Total Fund Management is CPPIB’s largest group by assets and oversees macro portfolio strategy for the fund manager’s public markets division. The group is overseen by chief investment officer Ed Cass and was created last fall by merging Total Portfolio Management, which had $180-billion under management, with the fund’s Balancing and Collateral team. Under the new restructuring, the memos say, the group will have five subdivisions, including portfolio design and active inve
Read more 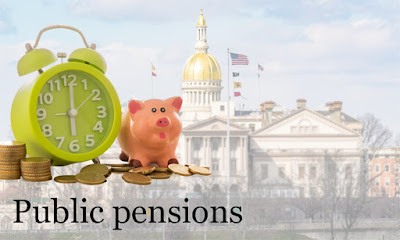 Chris Flood of the Financial Times reports markets rebound boosts US state pension plans: The record breaking rally for US equities last year has helped America’s largest state pension plans to recover from the wounding punch delivered by the coronavirus pandemic which had threatened to damage parts of the US retirement system.  The aggregate funded ratio for US state pension plans reached 78.6 per cent at the end of December, a jump of 16 percentage points from the 30-year low of 62.6 per cent registered in March 2020, according to estimates by Wilshire Consulting, the investment advice and research provider.  The funded ratio illustrates the gap between the assets held by a pension plan and its expected liabilities, providing an estimate of the future retirement benefits schemes will have to pay. Liquidity unleashed by the Federal Reserve in response to the pandemic combined with a series of emergency relief spending programmes helped the S&P 500 to rebound 63 per cent by the en
Read more

UAPP Pulls Billions Out of AIMCo? 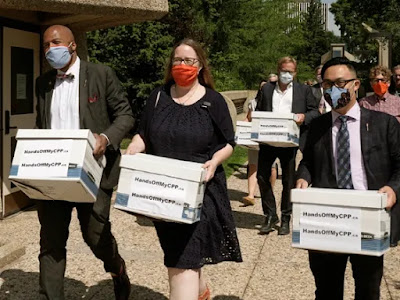 Lisa Johnson of the Edmonton Journal reports that a university teachers pension plan pulled out billions in assets from AIMCo management: A pension fund for academics and professional staff at universities has dumped Alberta’s government-owned investment manager from control of $2.7 billion of its assets. The board of the Universities Academics Pension Plan (UAPP) agreed in December to move its public equities portfolio, and has since withdrawn those assets from the Alberta Investment Management Corporation (AIMCo) while it searches for a new manager. The move comes after AIMCo reported a $2.1-billion loss last April due to a volatile investment strategy that has since been scrapped, and as other Alberta teachers are set to see their public pensions move under AIMCo management. UAPP board chair Geoffrey Hale said Monday some of the board’s concerns with AIMCo’s management have been addressed, but the board was not entirely satisfied with responses to what they see as pr
Read more

Sell In May and Go Away? 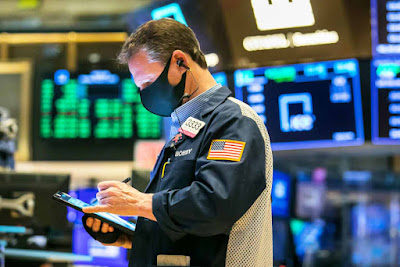 Yun Li and Thomas Franck of CNBC report the S&P 500 rebounds more than 1%, ends the volatile week flat: U.S. stocks rebounded on Friday as Wall Street reassessed concerns arising from news that the White House could seek a hike to the capital gains tax. The Dow Jones Industrial Average gained 227.59 points, or 0.7%, to 34,043.49 amid a jump in Goldman Sachs and JPMorgan shares. The S&P 500 rose 1.1% to 4,180.17 led by financials and materials, while the tech-heavy Nasdaq Composite climbed 1.4% to 14,016.81. The S&P 500 closed the turbulent week with just a 0.1% loss, while the Dow and the Nasdaq fell 0.5% and 0.3% for the week, respectively. Wall Street came off a turbulent session for equities after multiple news outlets reported Thursday afternoon that President Joe Biden is slated to propose much higher capital gains taxes for the rich. Bloomberg News reported that Biden is planning a capital gains tax hike to as high as 43.4% for wealthy Americans. The propo
Read more