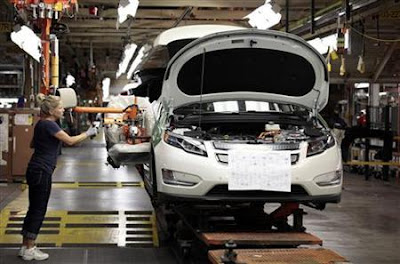 General Motors Co recognizes that its pension deficit represents a risk to the company that management is hoping to take "off the table" for investors, Vice Chairman Steve Girsky said on Wednesday.

The automaker's pension plan in the United States was underfunded by $10.8 billion at the end of June, according to a slide presentation prepared by GM for an investor conference in New York. This does not include some $2 billion in stock the automaker put into the plan in January.

Analysts have said the automaker's pension shortfall is among the biggest risks to investors. The recent drop in interest rates compounds these issues because it increases the size of the underfunding.

"We want to take the pension risk off the table," Girsky said during the Credit Suisse Automotive & Transportation Conference.

Girsky told investors that GM did not know how much it will put into the fund next year. The automaker is not required to make any contributions to its pension fund until 2015.

"We don't have to put a penny into this thing until 2015 and there is a long runway from here to there," Girsky said. "That said, we think it's a risk. The idea is to de-risk the company."

Under GM CEO Daniel Akerson, the automaker has sought to maintain a "fortress balance sheet" with enough liquidity to support steady investment in product and technology.

But GM's pension deficit represents one of the major risks to the company, compounded by the fact that interest rates are now at their lowest level in decades. A pension is a fixed payment drawn by workers in retirement.

A lower interest rate increases the underfunding of GM's pension plan. U.S. Treasury prices fell to their lowest level in at least 60 years this week.

Analyst Jonas wrote in his note: "The U.S. pension plan represents by far the biggest potential call on cash for GM."

Another thing that bothers me with all these corporate plans "de-risking" by going into bonds is that while it may seem as if they're de-risking from a corporate perspective, for the pensioners they may be taking on excessive risk without even knowing it. While the market worries about deflation, bonds seem a safe bet, but that can change very quickly. I think GM should explore a few options with their pension plan before giving up all hope.

Finally, this proves my point that companies shouldn't be in the pension business at all. Pensions should be public and managed by experts who are well compensated, aligning their interests with those of pensioners, not some corporate entity looking to maximize shareholder value. In other words, GM has enough problems producing cars that people want to buy, the last thing they should be worrying about are pensions.