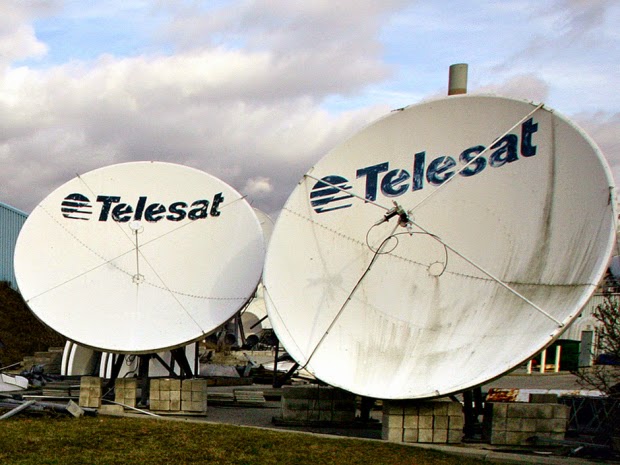 
Ontario Teachers' Pension Plan and Public Sector Pension Investment Board are nearing a $7 billion deal for Canadian satellite company Telesat Holdings Inc. after months of delays and discussion breakdowns, people with knowledge of the matter said.

Under the terms being discussed, the funds will acquire Loral Space & Communications Inc. (LORL), a publicly traded shell company that owns 63 percent of Telesat, for about $85 a share, or $2.6 billion, said the people, who asked not to be named discussing private information. While a deal could be announced next month, talks may fall apart again given the parties’ inability to reach an agreement in the past, the people said.

Telesat has been on and off the block for years. Loral and PSP, which already owns 37 percent of Telesat, called off a sale effort in 2011, after offers from bidders including EchoStar Corp. and Carlyle Group LP fell short of expectations. Talks started again this year before stalling in June because Mark Rachesky, Loral’s largest shareholder, couldn’t agree with PSP on a price to sell the company, failing to bridge an equity gap of about $100 million, people said then.

Representatives for Loral, Ontario Teachers’ and PSP declined to comment.

The exact price will depend on how a September ViaSat Inc. lawsuit settlement is divided between the New York-based company and its former subsidiary, Space Systems/Loral LLC. That unit was sold to MacDonald, Dettwiler and Associates Ltd. in 2012 for about $1 billion.

The division of the settlement, the final hurdle to a sale, may be determined in the coming weeks, the people said.

Loral and PSP acquired Telesat from Canadian telecommunications company BCE Inc., a deal announced in December 2006 valued at about $3 billion including debt.

A sale now would provide Loral with two long-term owners while allowing Loral’s shareholders, including Rachesky’s MHR Fund Management, which owns 38 percent of the company, an attractive premium to their investment. Selling Loral as a whole, rather than the Telesat assets alone, which was previously floated, would save both the company and its shareholders a larger tax bill on the sale.

Telesat owns 14 satellites and manages the operations of satellites for third parties, according to its website. The company was founded in 1969 and launched the world’s first commercial, domestic communications satellite in geostationary orbit in 1972.

The terms of this deal have changed drastically since I last covered it back in April. The media was then reporting that Teachers' was going it alone, bidding on Loral (LORL) Space & Communications Inc.’s Telesat Holdings Inc. for about $7 billion including debt by acquiring Loral straight out and then the rest from PSP Investments.

Now we learn this is another "club deal" between Ontario Teachers' and PSP, with both bidding on Loral, however, as the article states, the deal isn't done just yet and it may fall apart again given the parties' inability to reach an agreement in the past.

But some pretty heavy hitters are betting the deal will go through, including George Soros, Leon Cooperman and Mario Gabelli. Have a look at the Q3 filings on Loral showing the top institutional holders (click on image): 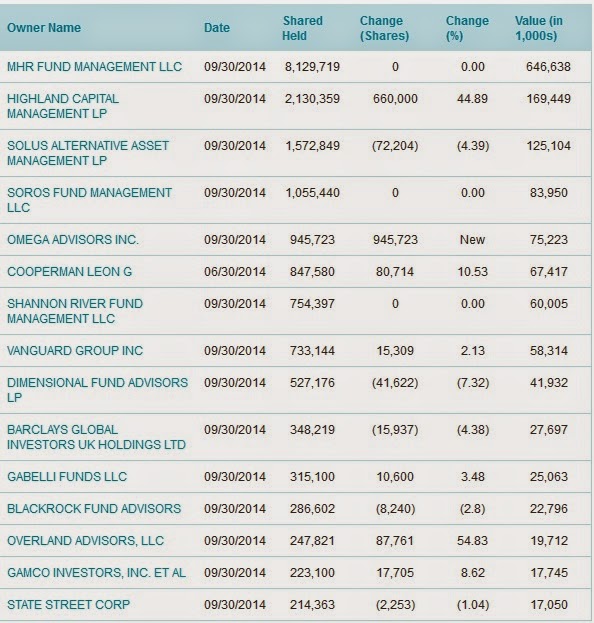 In fact, Soros, Cooperman and other top funds like Ken Griffin's Citadel, are also top holders of Dish Network (DISH), a company which provides pay-television services in the United States through DISH and Wireless segments.

As shown below, shares of Loral and Dish Network have surged over the last month and the latter keeps making new highs (click on images to enlarge): 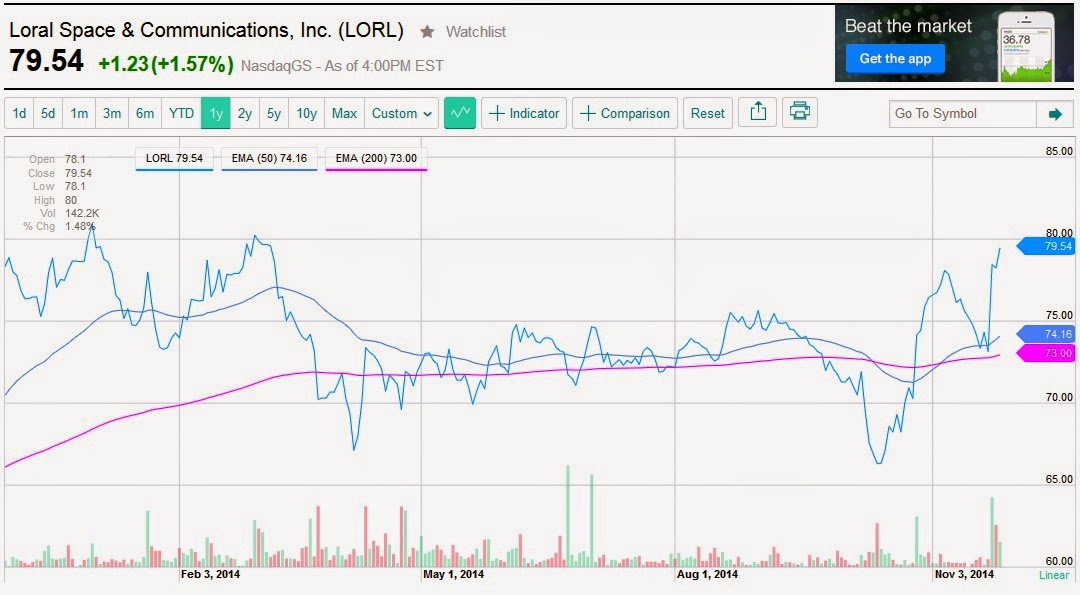 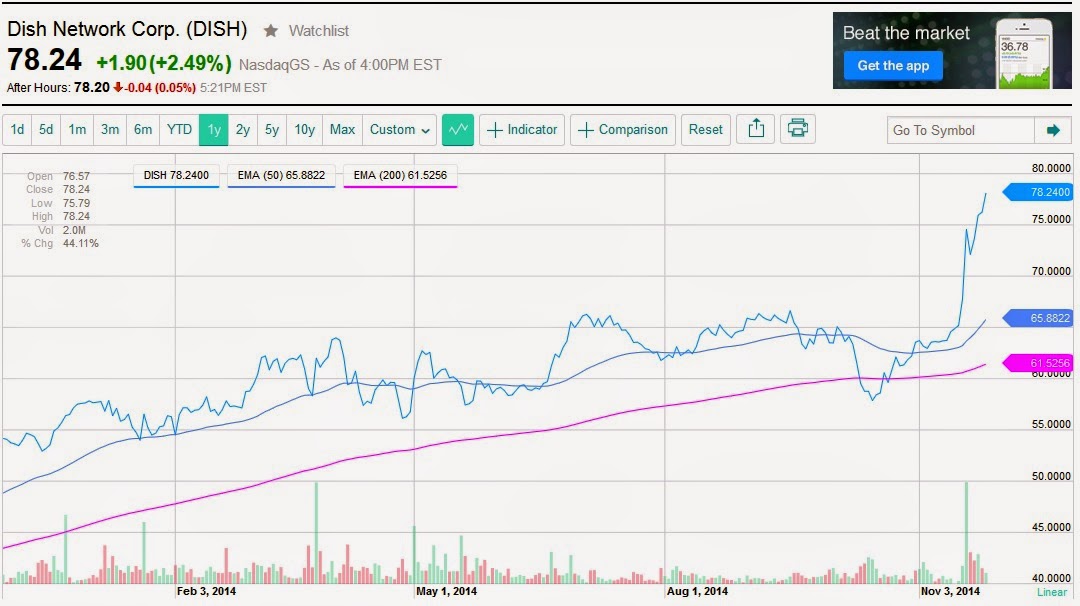 As you see, there's a very bullish uptrend especially on Dish but I wouldn't touch either share. It's too late, the big money has already been made by the big boys club (wait for a nice pullback before jumping into Dish).

In other related news on PSP Investments, my friends over at Pension360 posted a comment on how it's in talks to buy $1 billion worth of Australian timber assets from Hancock Timber Resource Group. Hope these investments deliver better results for them than they did for CalPERS which is now is one of the largest timber owners in the United States and reviewing their timber allocation after poor performance. Then again, AIMCo scored huge on timberland so it depends on whether these are direct or fund investments, how these deals are structured and whether the assets are bought at a nice discount.

Below, Draper Fisher Jurvetson Partner Steve Jurvetson discusses the benefits of internet satellites, saying they can provide faster, cheaper service. He speaks on “Bloomberg West.” Listen carefully to his comments and you'll understand why Ontario Teachers' and PSP see a bright future for Telesat.