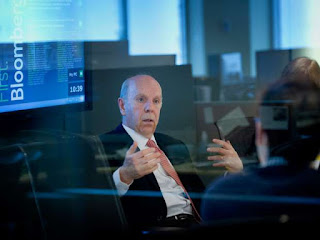 
Canada's third-largest public pension plan has halved the number of computer-driven hedge funds in its investment portfolio and put more money into the funds its sticking with, sources with knowledge of the matter told Reuters.

The Ontario Teachers' Pension Plan this summer pulled cash from 10 of the 20 hedge funds in its portfolio which use computer algorithms to choose when to buy and sell, two of the sources said.

Hedge funds worldwide are under increasing pressure in the wake of poor or flat returns as well as investors' efforts to cut costs. Data from industry tracker Eurekahedge showed that investors have pulled money from hedge funds globally every month in the four months to end-August.

One of the hedge funds that received more funds from the Ontario Teachers' Pension Plan said it had told them it was looking for funds which offered a different strategy from other funds.

"They expressed that a lot of strategies today you can mimic with a few exchange-traded funds or create synthetic products and there is no reason to pay management or performance fees," the source said.

Another hedge fund which the Canada fund dropped said the pension scheme had said it wanted to avoid funds invested in similar underlying assets.

Some of the computer-driven hedge funds the Ontario Teachers' pulled money from followed market trends, such as Paris-based KeyQuant, which has more than $200 million in assets under management, according to its website.

The Ontario scheme also withdrew $65 million in June from trend-follower Cardwell Investment Technologies, a move which ultimately led to it shutting its doors this summer, one of the sources said.

Those funds to receive a boost offered a more specialist set of skills, such as London-based computer-driven currency hedge fund Sequoia Capital Fund Management, in which the pension fund doubled its investment, a second source said.

I reached out to Jonathan Hausman, Vice-President, Alternative Investments and Global Tactical Asset Allocation at Teachers' in an email earlier today to discuss this latest move and copied Ron Mock on it.

But knowing how notoriously secretive Ontario Teachers' gets when it comes to discussing specific investments and investment strategies, especially their hedge funds, I doubt either of them will come back to me on this matter (if they do, I will edit my comment).

Those of you who never met Jonathan Hausman, there is a picture of him now sporting a beard on Teachers' website along with his biography (click on image): 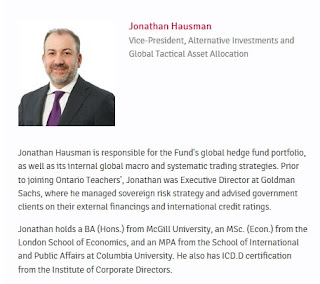 While the absolute amount is staggering, especially relative to its peer group, you should note when Ron Mock was in charge of external hedge funds, that portfolio represented roughly 10% of the total portfolio and it had a specific goal: obtain the highest portfolio Sharpe ratio and consistently deliver T-bills + 500 basis every year with truly uncorrelated alpha (overlay strategy).

[Note: When Teachers had 10% invested in hedge funds and hit its objective, this portfolio added 50 basis points+ to their overall added-value target over the benchmark portfolio with little to no correlation to other asset classes. The objectives for external hedge funds are still the same but the overall impact of this portfolio has diminished over the years as hedge fund returns come down, other more illiquid asset classes like infrastructure, real estate and private equity take precedence and Teachers expands its internal absolute return strategies where it replicates these strategies internally, foregoing paying fees to external managers.]

Now, we can argue whether we are on the verge of a hedge fund renaissance or whether active managers could be ready to shine again but the point I'm making is most large pensions and sovereign wealth funds are more focused on directly or indirectly investing huge sums in illiquid alternatives and I don't see this trend ending any time soon.

In fact, I see infrastructure gaining steam and fast becoming the most important asset class, taking over even real estate in the future (depending on how governments tackle their infrastructure needs and entice public pensions to invest).

I will end with a point Ron Mock made to me when I went over Teachers' 2015 results. He stressed the importance of diversification and said that while privates kicked in last year, three years ago it was bonds and who knows what will kick in the future.

The point he was making is that a large, well-diversified pension needs to explore all sources of returns, including liquid and illiquid alternatives, as well as good old boring bonds.

I was however saddened (and surprised) to learn that Daniel MacDonald recently left Ontario Teachers to move to San Diego where he now consults institutions on hedge funds (his contact details can be found on his LinkedIn profile).

Daniel is unquestionably one of the best hedge fund analysts in the world and one of the sharpest and nicest guys I ever met at Teachers. aiCIO even called him one of the most influential investment officers in their forties (click on image): 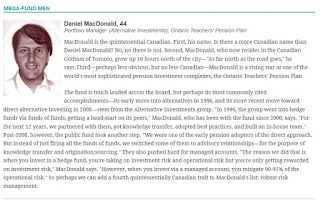 He's even won investor intelligence awards for his deep knowledge of hedge fund investments and none of this surprises me. His departure represents a huge loss for Ontario Teachers' external hedge fund group.

Below, CNBC's Kate Kelly reports hedge fund Perry Capital is closing its flagship fund after 28 years in the business. No surprise to me, it's a hellish year for hedge funds, and many marquee names are feeling the heat from investors who are fed up paying outrageous fees for mediocre returns.