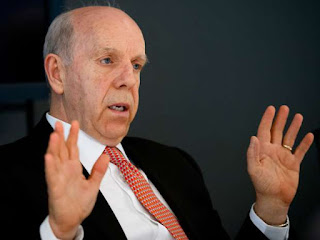 Ron Mock, Ontario Teachers' president and CEO was in Montreal briefly last week following the Milken Institute Conference in Los Angeles to discuss "The Real Infrastructure Questions for Canada" at The International Finance Club of Montreal.

Again, take the time to read the entire speech here, it covers the points above in more detail.

Also, Hugh O'Reilly, president and CEO of OPTrust recently joined BNN to talk about what he'd like the Canada Infrastructure Bank's mandate to be. Listen carefully to Hugh's comments and concerns, he too raises excellent points. If it doesn't load below, watch it here.