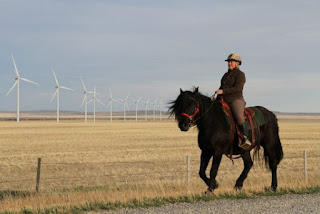 
The firm that administers more than $100 billion in Alberta government pensions and other funds says it is buying substantial stakes in two wind power projects that just received 20-year power price guarantees from the province.

The Alberta Investment Management Corporation or AIMCo says it has struck a deal with a subsidiary of Rome-based global power company Enel to buy 49 per cent ownership of the projects to be constructed near Pincher Creek in southern Alberta.

No financial details were released. The two projects are expected to have the capacity between them to produce 145.6 megawatts of electricity.

Enel was one of three companies chosen in December by the Alberta government through an auction process. They are to build four wind power projects with capacity of almost 600 megawatts of electricity at a total cost of about $1 billion.

The other winning bids came from Edmonton-based Capital Power and Portugal-based EDP Renewables.

The province, which announced details of its second and third renewable power auctions on Monday, wants to add up to 5,000 megawatts of renewable energy by 2030 through private sector investment of about $10 billion.

You can read a press release on this deal on AIMCo's site here.

Last night, I was watching a BNN House Money interview with Ann-Marie Lurie, chief economist at the Calgary Real Estate Board, discussing why Calgary's housing market is likely to remain flat this year even as the economic recovery grows. You can watch the interview here.

Mrs. Lurie was saying how inventories are building up in all segments of the Calgary real estate market and that even though oil prices have firmed up, net migration to the province is still down from when oil prices were much higher and this sector provides high-paying jobs that support residential real estate in Calgary.

Now, AIMCo is based in Edmonton but Alberta is oil country so trends in oil matter a lot to that province. Nonetheless, the province has managed to diversify its economy and a pickup in manufacturing activity has bolstered employment there. With energy prices picking up over the last year, this too has added much-needed jobs to the province but with supply outpacing demand, residential real estate prices in Calgary are still down 4% for detached homes and 14% for condos since 2014 and this is without adjusting for inflation (not sure but I reckon the same thing is going on in Edmonton).

The good thing about Calgary is unlike other big Canadian cities, zoning laws aren't overly regulated to pander to environmental groups, so the supply of housing is ample to meet demand. It's actually a great city, one I enjoyed visiting when I was working as a senior economist at the Business Development Bank of Canada back in 2008-10.

All this to say that I found it interesting to read AIMCo is investing in wind projects in Alberta but it goes to show you that they're thinking long-term and these two projects fit well in their renewable energy portfolio.

AIMCo isn't the only large Canadian pension fund investing in wind projects. Last June, PSP Investments became the largest shareholder in U.S.-based Pattern Energy Group Inc. as part of a series of transactions aimed at supporting a major expansion of the renewable energy company. It was a US $500 million co-investment and I wrote about it here.

The Caisse, CPPIB, Ontario Teachers' and other large Canadian pensions have also invested significant sums in renewable energy projects. These are long-term, profitable investments and some pensions see these investments as part of their commitment to lower their investments in carbon.

As far as Rome-based Enel, I checked out its website and was impressed. When you read about the company, you'll understand its global reach and why it's a leading power company:


As a truly global business, Enel is perfectly placed to open power around the world. Our global reach extends from Europe to North America, Latin America, Africa and Asia. We connect hundreds of millions of people to more reliable and increasingly sustainable power, supplying the largest customer base of any European energy company.

Enel operates in 37 countries, with 2.1 million kilometers of grid network across five continents and a net installed capacity of approximately 84 GW.

We have a very large presence in Europe: we operate along the entire energy chain, from generation to sell to end users in Italy, Spain, Slovakia and Romania; we produce in Russia, Greece and Bulgaria, and sell electricity and gas in many other countries on the continent, from the Atlantic to the Baltic.

We are one of the largest energy companies in the Americas, with power generation plants of all types across 11 countries from Alberta in Canada to the central Andes. We supply energy to some of the largest cities in South America: Rio de Janeiro, Bogota, Buenos Aires, Santiago de Chile and Lima.

We produce electricity in Morocco and South Africa, where in 2015 we won the award of “Investor of the year” for our various projects in the renewable energy sector. This development will continue in other countries in Africa and Asia, with operations already up and running in India and Indonesia.

By combining our unique scale and reach with new opportunities in a more connected world, we are shaping the future of energy.

Below, a promotional video on how Enel is reshaping the future of energy. I find it amazing that Alberta is developing its wind projects, diversifying away from oil which remains its biggest export.With this deal, AIMCo is investing in Alberta's energy future and its beneficiaries will reap the long-term gains of these projects.