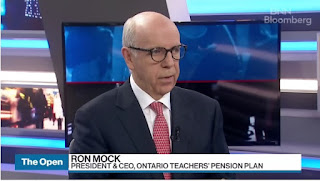 I embedded the interview below and you can also watch it here. Ron spoke about concerns of tariffs and rising trade tensions because that's where "politics, egos and all sorts of things can come into play."

He said the diversification benefits of having a global portfolio allows them to rebalance because what is going on in Asia isn't the same as Europe or the US.

But he said they have people and boots on the ground all over as they have offices in Asia (Hong Kong), South America (Santiago, Chile), and Europe (London) and are keenly aware of government policies in these regions and how it impacts their portfolio.

As far as the Fed, this interview took place yesterday, a day before today's meeting where the Fed raised rates and signaled two more rate hikes for next year. Ron said if the "Fed goes or holds, it won't make much of a difference" but he added "moderation is appropriate" as the yield curve is flat and global growth is slowing.

I couldn't agree more but it seems the Fed is on a different page, looking at lagging economic indicators.

Ron is worried about rising trade tensions and volatility. I'm more worried about three scenarios:
What about tariffs? That's what Ron Mock and Teachers' are worried about. Well, Trump's protectionist policies got us into this mess and it's up to him and his team to manage them appropriately because if trade tensions only get worse, it will impact stock markets, and he can kiss his reelection bid goodbye.

Trump is ruthless, he has proven it time and time again. He has made many mistakes but he will do whatever it takes to win another election, including firing Powell and backing off on tariffs if that's what it takes.

If he wins a second term, the Chinese will have to start negotiating harder on trade and concede something significant.

I'm getting way ahead of myself here, but stay tuned, volatility isn't over, not by a long shot.

The only good news I can tell you is large global pensions, sovereign wealth funds, and institutional leveraged players need to rebalance their portfolio come the end of the month, away from bonds and back into stocks. So we may get a bit of a breather as we approach the end of the year and start a fresh new year.

Maybe. That all remains to be seen. These markets are insane, scaring off retail investors and hurting a lot of institutional investors as well.

No wonder everyone is looking to increase their allocation to private markets, the high-frequency algos and short-sellers shorting with no uptick rule have ruined public markets, for good in my opinion.

Below, Ron Mock, president and CEO of the Ontario Teachers’ Pension Plan, joins BNN Bloomberg to discuss his investment prospects for 2019. Great interview and very timely.

Second, supporting what Ron stated, Charles Dumas, chief economist at TS Lombard, gave a gloomy outlook for the global economy in 2019, stating the trade war has had ‘huge’ impact on growth.

I wasn't very impressed with how this meeting was handled. I think at the very least the Fed could have stopped its balance sheet reduction and Powell was almost praising himself and their decision to raise rates (listen to news conference below).

The FOMC could ignore Trump but it should listen to Druckenmiller, Gundlach and others who are more forward-looking. And it should read Francis Scotland's analysis on why the balance sheet matters and stop stating nonsense that the balance sheet reduction program will continue to proceed as planned. That's just foolish and dangerous.

All this to say if Trump fires Powell and replaces him with a more dovish Fed Chair, I think a lot of people will publicly grumble but privately they will welcome the decision. Stay tuned.