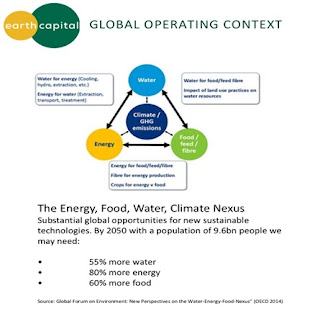 Energy-food-water connections lie at the heart of sustainable economic and environmental development and protection. Demand for all three resources continues to grow brought on by a growing population, ongoing population movements throughout the world from farms to cities, rising incomes and increased desires to spend those higher incomes on energy and water-intensive goods.

What’s an example of sustainable investing in the nexus between climate change, energy, food & water?

Water is a valuable resource literally going down the toilet. By 2025, two-thirds of the world’s population could be facing water shortages, while water demand is growing rapidly. The UK alone flushes 740 billion liters of perfectly clean water down the toilet every year, which is the equivalent of more than 300,000 Olympic-sized swimming pools. One of the main culprits is the outdated design of toilets.

The toilet hasn’t fundamentally changed since the late 1800s, and with UK toilets alone averaging up to nine liters of water per flush and accounting for up to 90% of commercial water use in buildings, it’s not hard to see why the traditional toilet system has become inefficient.

Propelair, an Earth Capital portfolio company, makes water efficient toilet that uses an integrated air pump to conserve and reduce the amount of water per flush from 6-8 liters to just 1.5 liters. It uses 84% less water and 80% less energy than conventional toilets. It is also more hygienic, reducing the spread of germs by 95% and removing 99.9% of waterborne contaminants. It gives a fast, powerful flush, which reduces queueing in busy public areas, and the design is leak-proof. For commercial buildings and other high-use sites such as gas stations and fast food outlets, this means significant savings in water, electricity and maintenance bills, as well as a healthier, safer and more productive workforce.

How does it work? The lid is closed before flushing, which forms an air seal with the bowl. A small quantity of water enters the bowl to wash it, followed by displaced air. As the air can’t exit the bowl, it acts to efficiently and effectively expel the contents of the bowl without water, pumps or maceration. After flushing, sufficient water replenishes the water trap seal, and the Propelair toilet is ready for the next user. The entire flushing cycle takes around three seconds to complete.

Investec became very interested in the product from a sustainable investing perspective and, as the high-use first-floor toilets of its UK headquarters were frequently blocked, the Investec facilities team decided to trial Propelair toilets. Since the four Propelair toilets were installed in March 2017, no maintenance was needed. In the first year, just four Propelair toilets saved nearly 300,000 liters of water, without compromising efficiency. Because of the water tracking device that Propelair installs in toilet cisterns before and after installation, they were able to demonstrate that in the first 25 days, the four toilets at Investec’s office had saved 31,000 liters of water.

Investec, Earth Capital and Universal Partners have made a substantial investment in Propelair. Earth Capital, through its Nobel Sustainability Fund, was already an existing shareholder and has now increased its shareholding.

They have invested in Propelair to sustainably invest in the nexus between climate change, energy, food & water by funding a Cape Town roll out to conserve water and help avert the threat of the taps being turned off as a result of the drought brought on by climate change. Climate change caused the drought that threatened water supplies. In addition to the residential and commercial implications of the water being turned off for a metropolis with a population of almost 4 million, turning off the water supply would have detrimentally impacted the irrigation of locally grown food. In Cape Town, climate change was linked to both the supply of water and the supply of food.

Investec led the growth capital PE financing and will be Propelair's largest shareholder followed by Earth Capital and Universal Partners. Existing shareholders are all able to participate in the second stage of the recapitalization so as to benefit from the expected growth of the business as it cements its footprint in the UK and starts its overseas expansion.

After the investment, the new focus of Propelair is to accelerate business growth, at home and abroad. One of their new target markets is South Africa. With Cape Town recently going through the worst water crisis that a modern city has faced, their aim is to exploit a sustainable investment opportunity by investing in Propelair as an investment in the nexus between climate change, energy, food & water

For example, through a technology transfer to China, Propelair may achieve scalability by installing over 13,000 of its toilets in the 13,000 dorm rooms being built for a new university.

I thank Geoff for sharing this great comment with my readers. I also invite my readers to read Investec's press release, Flushed with success, to learn more about Propelair's incredibly efficient toilet.

Geoff is right, we need to stop thinking about sustainable investing through the climate change lens and broaden it out to climate change, energy, food and water.

I met Geoff at the CAIP conference in Montreal in October along with Gordon Power, CEO of Earth Capital Partners and Richard Burnett, Chief Sustainability Officer at the same fund.

They're all exceptionally bright people with years of experience and I enjoyed covering that conference in detail here.

On Monday, I covered Michael Sabia's thoughts on doing sustainable investing right and wanted to follow up with this comment to broaden the scope away from just climate change.

As you will see, there's increasingly a sustainable investing component in many of the big pension fund investments, including PSP's recent acquisition of BFB, Australia-based diversified farming business.

You have to start thinking about sustainable investing not just in terms of how it impacts climate change but how it impacts food, water, energy and more.

Below, see how Propelair has reinvented the toilet to save forward-thinking organizations water, energy and money. A simple yet powerful idea which is very scalable all over the world.