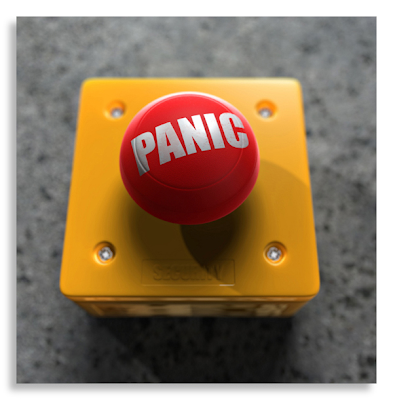 Do you believe in God? Forgive my religious undertones but as I battle a stomach virus, no doubt exacerbated by the excrement coming out of Washington, I am starting to reacquaint myself with God Almighty.

Tomorrow Jews around the world will celebrate Rosh Hashana and when markets open, many participants of all religions (and some atheists too) will pray that the stock and credit markets stabilize. Thus far their prayers have gone unanswered and I fear the worst is yet to come.

It was another disastrous Monday as fear gripped global markets following the failure of US lawmakers to gather enough votes to pass the Emergency Economic Stabilization Act - the $700bn Treasury-funded facility for purchasing and managing toxic assets held by the US banking system.

The Dow Jones plunged 778 points today, the biggest point drop in history (but nowhere near the biggest percentage loss which happened in the crash of 1987).

Canadian stocks also crumbled today. The Standard & Poor's/TSX Composite Index, fell 6.9 percent to 11,285, the most since Oct. 25, 2000. The main Canadian benchmark has fallen 18 percent in September, poised for its worst monthly drop in a decade (Note: Canadian and global public pension funds will get clobbered in 2008):

"This is 1987 in slow motion,'' said David Cockfield, who helps oversee about $2 billion as a portfolio manager at Leon Frazer & Associates in Toronto, referring to the crash of October 1987, when the main Canadian index dropped 17 percent in two days. "The panic continues. Why stick your neck out?''

Indeed, very few investors stuck their necks out today. Over $1.2 trillion of market value was wiped off the NYSE. Over 1.5 billion shares traded on down volume, eclipsing the 20 million shares on up volume. Investors were selling into weakness all day today.

Bear in mind that it is end of quarter, so lots of window dressing is going on as mutual funds sell the losers and buy the winners (not that there are many winners in this Ursa Major). Also, hedge funds are preparing for massive redemptions, which means more forced selling into weakness.

Now, unlike CNN's Lou Dobbs, the self-proclaimed "Mr. Independent," I do not see today's political defeat as a victory for American democracy or Main Street. Lou is the very reason why I am an elitist because as he ignorantly panders to the masses who watch him every night - like any desperate and dumb demagogue would to gain TV ratings - he is misleading his viewers and peddling a dangerous lie.

Today's defeat was no victory for democracy or Main Street. It was a dangerous move by ignorant politicians from both parties who put politics ahead of their nation's best interests.

I am too tired to get into it, but read Willem Buiter's FT comment, Those whom the gods would destroy, they first make mad:

What is likely to happen next? With a bit of luck, the House will be frightened by its own audacity and will reverse itself. If a substantively similar bill (or a better bill that addresses not just the problem of valuing toxic assets and getting them off the banks’ books, but also the problem of recapitalising the US banking sector) is passed in the next day or so, the damage can remain limited. If the markets fear that the nays have thrown their toys out of the pram for the long term, the following scenario is quite likely:

None of this is unavoidable, provided the US Congress grows up and adopts forthwith something close to the Emergency Economic Stabilization Act as a first, modest but necessary step towards re-establishing functioning securitisation markets and restoring financial health to the banking sector. Cutting off your nose to spite your face is not a sensible alternative.

In response to today's vote, central banks around the world are pumping billions of dollars into the financial system to ease credit markets as banks continue to stop lending to each other:

The Federal Reserve on Monday prepared to pour an extra $630bn (€437bn, £350bn) into the global financial system in coordination with other central banks around the world, in a massive effort to curb extreme stress in international money markets.

The move is designed to reinforce the impact of the $700bn bail-out bill proceeding through the US Congress and directly relieve market stress in the near term, before the new government fund can start operating.

I am getting this sick feeling in my stomach that they are pushing on a string. The freeze in credit markets is more troubling than any plunge in stock prices. If payrolls aren't met, you will see true panic and fear grip Main Street and Wall Street.

Tonight, I wish Jews around the world Happy Rosh Hashanah as they celebrate the Jewish New Year.

As the global financial system teeters on collapse, I will also be praying for world peace and happiness now that we entered uncharted territory.