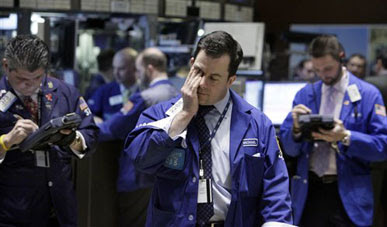 It was another freaky Friday. First, let's discuss the US jobs report. There was a decline of 20,000 payrolls in January and the unemployment rate fell to 9.7%. Despite being off in my forecast (I was expecting big payroll gains close to 150K), I am still convinced that big job gains are in store for Q1 & Q2 2010.

There are two encouraging things worth noting from the January jobs report. First, temporary employment added 52,000 jobs in January and it wasn't all Census hiring. Since reaching a low point in September 2009, temporary help services have added almost a quarter of a million jobs.

Why is this important? Because employment lags the broader economic recovery, and companies usually hire temp workers initially before offering them full-time jobs. As shown in the chart below, the pickup in temp workers has historically been a good harbinger of future employment gains. 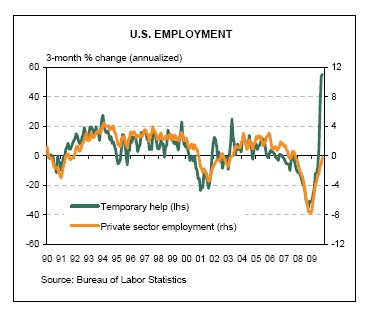 Next, Stéfane Marion, Chief Economist & Strategist at the National Bank of Canada noted the following encouraging news from the US jobs report:

...the wage bill is now expanding at a 4% clip in the last three months, the best showing since early 2008. We also note that the household survey from which the unemployment rate is derived showed the addition of 784,000 jobs in January (after adjusting for revisions to population). The employment figures derived from this survey, however, are much more volatile than those obtained from the payroll survey. As such, it is preferable to use a 3-month moving average to extract the underlying trend. As shown, household jobs still show a gain of 110,000 after smoothing. In the past, the household survey has led the payroll survey coming out of recessions. 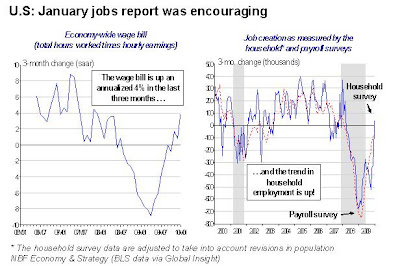 All this means that no matter how the BLS muddies the waters, job growth is around the corner. It has been a severe recession which is why it's taking a frustratingly long time to see some meaningful employment gains, but the recovery in the US labor market is already upon us.

Now, the stock market is another beast altogether. The explosion of algorithmic trading makes it very difficult to understand the daily movements in stocks. Just look at today's price action on the Dow: 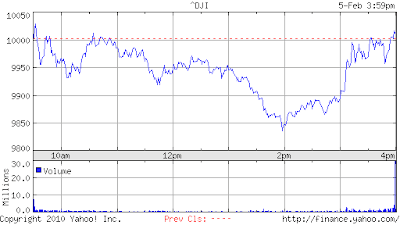 What happened at the end of the day? Traders will tell you "it's just short covering" while conspiracy theorists will tell you it's the "Plunge Protection Team" (PPT) or Goldman Sachs.

Maybe it was just the big hedgies manipulating shares lower in the early morning so they can scoop them up at attractive levels. Who knows? All I know is that there is still plenty of liquidity out there to drive shares much higher. That's why I keep buying these dips, especially the big dips on solar shares.

Look, is the market rigged? You bet it is. If you study stock markets on a daily basis, you'll see very weird things that defy logic. But at the end of the day, it all boils down to fear & greed. Forget Greece, PIIGS and all the noise coming out of Europe. This is just noise that the big hedgies use to feed off retail and less sophisticated institutional investors.

So, while it was another freaky Friday on Wall Street, I'd say the US jobs report was encouraging as was the price action in the stock market. Things are slowly getting better, but the pace of job growth is painfully slow. However, as the recovery gains steam, job growth will follow. It's only a matter of time now.