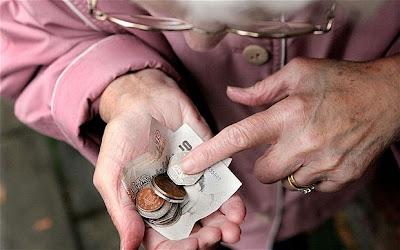 The IMF said yesterday that even a slightly faster than expected increase in life expectancy could impose a huge new financial burden on Western economies such as Britain. “The time to act is now,” it said.

They believe it has been routinely understated by about three years, which could render public finances unsustainable, they warned.

For Britain, the IMF calculated that on the “not unreasonable” assumption that the entire cost would fall on taxpayers, the country’s public debt would rise from 76 per cent of gross domestic product to as much as 135 per cent.

In today’s money, that additional cost would be about £750 billion.

The extra costs would come from the state pension and public sector pensions, whose liabilities the Treasury recently calculated already stand at £1.13  trillion. Part of the increase would also come from the state having to rescue failed private sector schemes, which are equally unprepared for a rise in life expectancy, it added.

Latest estimates for Britain from the Office for National Statistics [ONS] suggest that boys born in 2010 will live an average of 78.2 years, while girls will live an estimated 82.3 years. Approximately a third of babies born this year are expected to survive to their 100th birthday.

The IMF highlighted research by the ONS which suggested that such forecasts suffer “widespread” errors. Projections of future life expectancy are “consistently too low in each successive fore­cast, and errors were generally large”.

An “essential” reform is an automatic link between life expectancy and the state pension age, the IMF said. This would “avoid recurring public debate about the issue”, where older workers could resist a higher pension age.

George Osborne, the Chancellor, confirmed last month that the Treasury is considering such a link, which could ultimately push the standard retirement age to 70 and beyond.

The IMF also suggested a range of “risk-sharing” measures to spread potential costs between the Government, individuals and companies.

New financial products whose returns are linked to longevity could also be developed. Individuals could then “share the burden” by “self-insuring against longevity risk”.

Any move that raises more money for pensions is likely to be controversial with voters, but Laura Kodres, the assistant director of monetary and capital markets at the IMF, said: “The longer you ignore it, the more difficult it becomes to resolve. The time to act is now.”

The IMF’s analysis found that, although Japan and Germany are at the greatest risk of rising longevity costs, Britain and most of the Western world would find their public finances crippled if their citizens lived just three years longer than currently expected by 2050.

It said that as life expectancy rates used when calculating pension liabilities have routinely been underestimated by about three years, there is a strong chance of a pensions time bomb.

British pension funds estimate that an average male today who has managed to reach 65, will then go on to live to 86.2.

“To the extent that governments are not acknowledging longevity risk (and few in fact do), fiscal balance sheets become more vulnerable,” the IMF report said. “If not adequately addressed soon, it could potentially further threaten fiscal sustainability.” It added that longevity risks may also cripple life insurance companies and could push some into bankruptcy. Because private sector pensions are effectively backed by the state through the Pension Protection Fund, the final burden of private sector failures would fall on taxpayers.

“With the private sector ill-prepared for even the expected effects of ageing, it is not unreasonable to suppose that the financial burden of an unexpected increase in longevity will ultimately fall on the public sector,” the IMF said.

The Office for Budget Responsibility, the Treasury’s independent forecaster, has previously warned that the costs of age-related care in Britain already threaten to make public finances unsustainable, even before the risk of longer life expectancy.

The IMF’s forecasts relate only to the direct costs of maintaining pension incomes at their current levels for an ageing population, and does not include associated costs such as health and social care. The OBR has estimated that an older population could require health spending to increase by a further 5 per cent of national income by 2060.

Indeed, when you add healthcare costs and social care, the figures will skyrocket for all countries, placing enormous pressure on public finances as governments struggle dealing with an ageing population.

The IMF likes making stark warnings on economies. Crisis management is their business but they serve the financial and political elite, so take all their recommendations with a grain of salt.

Interestingly, while they harp on longevity risk, they don't mention much more important reforms such as consolidating smaller public and private defined-benefit (DB) plans into larger public DB plans and implementing world class pension governance for oversight and management of these funds. Worse still, they completely ignore the great pension slaughter taking place around the world today, and not surprisingly, the devastating impact of savage austerity on the UK economy.