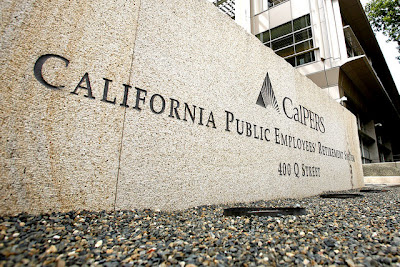 The nation's two biggest public pension funds reported meager returns for the last fiscal year, raising the prospects that state and local governments and school districts may have to contribute more toward their workers' retirements.

The return also was well below the target for CalPERS' long-term growth strategy of a 7.5% average annual rate, which is needed to pay for retirement benefits for more than 1.6 million members.

"The last 12 months were a challenging period for all investors, and the ongoing European debt crisis and slowing global economic growth increased market volatility and reduced equity returns," Dear said.

CalPERS' biggest losses were in stocks of public companies, down 7.2%, and investments in private-equity firms, down 5.4%. Public equity amounts to about half the fund's total investments. Bonds and other fixed-income investments gained 12.7%, while real estate rose 15.9% and infrastructure investments increased 8.4%.

No substantial turnaround in the equity markets is likely this year, Dear predicted, and CalPERS' weak returns are expected to translate into demands for higher contributions from member government agencies beginning next summer.

The two pension funds' paltry returns also are expected to heighten the debate over the need for reform of retirement benefits provided to state and local employees. Public pension funds statewide are reporting growing long-term liabilities that leave them at risk of not having the financial wherewithal to meet future retirement obligations.

Three cities have sought bankruptcy protection, most recently San Bernardino, partially to protect themselves from swelling pension fund debts. Gov. Jerry Brown has proposed a 12-point plan to reduce pension costs, but the Democrat-controlled Legislature this year has been slow to act on the governor's proposal.

CalSTRS, meanwhile, is expected to increase its calls on lawmakers for authorization to increase contributions made by school and community college districts to help fund educators' retirements.

CalSTRS also has a target average annual return of 7.5% for its $150.6-billion pension fund for 856,000 public school educators and their families.

CalSTRS lost 3.1% in its global stocks portfolio, which makes up about half its total investments. Real estate, however, showed a 9.2% gain, while private equity investments rose 5.9% and fixed-income bonds were up 7.3%.

Investment earnings alone won't put CalSTRS on a sound financial footing, Chief Executive Jack Ehnes said. The state Legislature, he said, needs to pass a law allowing for regular, gradual increases in contributions by the state and other CalSTRS participants.

You can read details of CalPERS' and CalSTRS' results here and here respectively. Below, embedded the results for major asset classes for CalPERS and CalSTRS (click on images to enlarge): 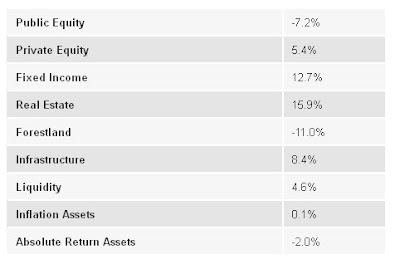 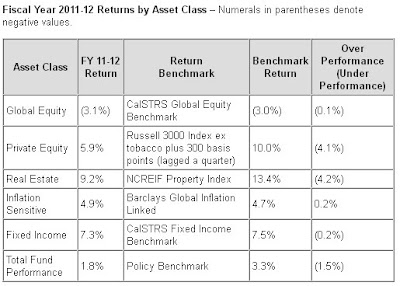 As you can see, stocks got hammered while bonds and real estate helped them etch out positive results. Also, please note the article above made a mistake, CalPERS made 5.4% in private equity, not a loss as reported above (Marc Lifsher told me CalPERS screwed up on their initial press release and never bothered telling reporters when they re-issued another one to correct it) .

One other thing worth noting is their absolute return strategy program (ARS) which invests in hedge funds was down 2%, more than 700 basis points below benchmark (see details here). They pay huge fees to hedge funds and receive little in return. Another case of investors getting burned by hedge funds.

The weak returns mean their long-term investment targets will need to be revised down and contribution rates will have to be raised. No choice, there is no other fix. Taxpayers are not on the hook, as is widely reported out there.

Finally, we'll see if California's giant pension funds follow their counterparts in Ohio in suing JP Morgan over 'whale' losses. Doubt that will happen and even if they do, good luck recovering anything.

Below, Joe Dear, CIO of CalPERS, talks about investment strategy and the need for compromise by lawmakers to aid economic growth and financial security. Dear speaks with Betty Liu on Bloomberg Television's "In the Loop." House Majority Leader Eric Cantor also speaks.