More Pension Lessons From Down Under? 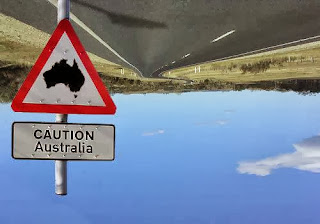 
Risky, high-yielding debt is being sold to Australian retail investors who manage their own pension savings, a move that underlines growing risks associated with the country's $1.5 trillion (935 billion pounds) private pensions system, the world's fourth largest.

About A$500 billion ($469 billion), or almost a third, of pensions are self-managed by individuals who avoid paying fees to professional managers and often spurn investment advice, making them an easy target for those marketing risky securities.

The sale of high-yielding debt to these investors underlines what regulators, including the central bank, see as a worrying trend toward greater financial risk in this part of the pension system. They are concerned these savings could be in jeopardy in the event of a market shock like the 2008-09 financial crisis.

"The challenge is that some of them think they are sophisticated investors and that behaviour drives their investment into quite risky assets," said Paul Dowling, principal analyst at banking research firm East & Partners.

"From a policy point of view, that's a major concern because their retirement funds can suddenly disappear."

The disappointing performance of some professionally managed pension funds in recent years has prompted a three-fold increase in self-managed retirement funds, whose total assets are now almost as large as the banking system's total retail deposits.

Individuals managing their own funds have long preferred a high exposure to shares and are now being approached by niche fixed-income brokers selling tiny unlisted bond offers from unrated small Australian companies.

Many bankers and asset managers, however, fear this emerging group of investors is not fully aware of the risks of entering a market where there are only one or two brokers to trade with.

"If they buy the bonds and hold them until maturity and nothing goes wrong, terrific. But if they want to sell or buy existing bonds in the secondary market, there is only one party they can deal with," said Phil Bayley, a debt capital market consultant at ADCM.

Unlike Europe or Japan where retail bonds are popular, less than 10 percent of Australia's A$530 billion of corporate bonds on issue is sold to retail investors, Thomson Reuters data shows.

"The positive side is that they are getting greater exposure to fixed income because Australia's bond market is a wholesale market," he said. "But the negative side that concerns me is that (these bonds) are highly illiquid."

With banks reluctant to lend to non-core clients due to tighter regulatory capital rules, niche brokerage firms have stepped in by selling A$210 million of debt issued from four companies over the past 12 months.

This is only the beginning, according to fund managers who have been approached to buy these offers.

However, Bayley said that if more brokers were to market these bonds, it would greatly enhance liquidity and price transparency and therefore reduce risk for investors.

These bonds are only a small part of the market, though some debt experts said they highlighted a need for further education to ensure retail pension investors understood the risks.

"The point is don't wait for things to blow up, proactiveness won't hurt," said Annette Beacher, head of Asia-Pacific Research at TD Securities in Singapore.

The issue of risky self-managed funds has come on the radar of the Australian Securities and Investments Commission (ASIC), which has warned against other types of higher-yielding debt, such as certain long-dated hybrid securities.

The corporate watchdog said risks were often inadequately explained to these investors and urged more disclosure.

Self-managed funds are the fastest-growing part of the pension system and are tipped to rise to 40 percent of the total pool of retirement savings by 2018.

Some fund managers have suggested that regulation is required, such as restrictions on investors' eligibility to purchase such investments, while others have called for the establishment of a mandatory suitability test for buyers.

In my last comment on pension lessons from Down Under, I criticized a Wall Street Journal article claiming America's fiscal woes can be addressed by following Australia's retirement model, shifting public sector workers out of defined-benefit plans into defined-contribution plans. I focused on the lack of proper coverage and how seniors poverty has exploded in that country.

Now we see self-managed funds are taking off in Australia because of disappointing results of professionally managed pension funds. This is leading many unsophisticated retail investors to make poor investment choices -- like investing in risky, illiquid high-yield debt at the worst possible time -- and  regulators are rightfully concerned.

Again, all this proves to me the real problem in Australia lies with their retirement system where DC plans dominate the landscape. Australia's shift to defined-contribution plans might have been touted as a success when it was first introduced but the evidence increasingly suggests the opposite is true.

Pension experts who understand the issues know that Australia's pension system is not a good international model. The best models to follow are found in countries like the Netherlands, Denmark, Sweden and Canada. But even there, the trend is shifting to DC plans, which should worry us all.

Those of you who want to understand the problems with Australia's retirement system should take the time to watch this report from the Australian Broadcasting Corporation. Below, Jessica Irvine discusses why Super funds have not been so super. Looks like they need to drastically  improve the governance of these Super funds.