Blame it on the Gipper? 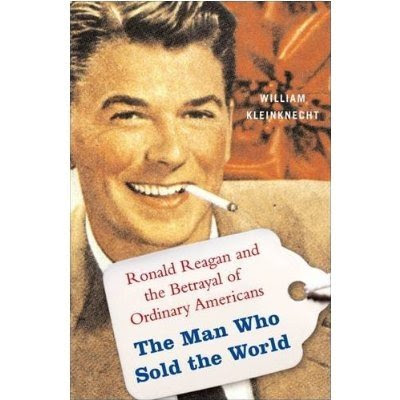 Before getting into this weekend's food for thought topic, I think you should all watch Secretary of the Treasury Tim Geithner's interview on ABC's This Week and the roundtable discussion where Paul Krugman expressed his concerns with the plan.

Interestingly, Krugman thinks the U.S. government is not doing enough to combat the crisis and that the plan will lead to another Japanese-style lost decade. I agree and I also agree that deficits do not matter in times of crisis because if you don't get the economy working again, the deficits will only get worse in the future.

But I want to take a step back this weekend and look at the historical events that laid the foundation to this global crisis. On Friday morning, I listened to an excellent interview on CBC Radio's The Current with Bill Kleinknecht, author of the new book, The Man Who Sold The World: Ronald Reagan and the Betrayal of Main Street America.

Ever since the global economic crisis took hold, people have been looking for a place to park the blame for it. Over-extended homeowners. Greedy bankers. Lackluster regulators. Inept elected officials.

Mr. Kleinknecht has another idea. He says the roots of this crisis go all the way back to the early 1980s and land at the feet of U.S. President Ronald Reagan. Click here to listen to the interview (scroll down to part 3).

Here is a review from Joe Conason published in BuzzFlash Reviews:

The myth of Ronald Reagan's greatness has reached epic proportions. The public rates him as one of the most popular presidents, and Republicans everywhere seek to cast themselves in his image. But award-winning journalist William Kleinknecht shows in this penetrating analysis of his presidency that the Reagan legacy has been devastating for the country—especially for the ordinary Americans he claimed to represent.

So much that has gone wrong in America—including the subprime mortgage crisis and the meltdown of the financial sector—can be traced directly to Reagan's policies. The financial deregulation launched in the 1980s freed banks and securities firms to squander hundreds of billions of dollars and make a shambles of the economy.

Boom-and-bust cycles, obscene CEO salaries, blackouts, drug-company scandals, collapsing bridges, plummeting wages for working people, the flight of U.S. manufacturing abroad—these are all products of Reagan's free-market zealotry and his gutting of the public sector. Reagan pioneered the use of wedge issues like race and the war on drugs to distract America while his administration empowered corporations to lay waste to our traditional ways of life.

In the spirit of Thomas Frank's What's the Matter with Kansas?, Kleinknecht takes us to Reagan's hometown of Dixon, Illinois, to show that he was anything but a friend to Main Street America. Relying on detailed factual analysis rather than opinion, The Man Who Sold the World is the first major work to explode the Reagan myth.

This book is a great companion to Will Bunch's Tear Down This Myth: How the Reagan Legacy Has Distorted Our Politics and Haunts Our Future (Hardcover)

"A seasoned crime reporter of the old school, William Kleinknecht has penetrated the showbiz curtain to expose the venality and cynicism of the Reagan era—and tells us why the crimes of that time still matter so much today."

So should we blame this mess on the Gipper? It's easy to blame a dead president for laying the foundations of today's global financial crisis, but there are many other figures from both political parties that followed the Gipper and cemented this crisis.

I leave you with another Go Left radio interview with Bill Kleinknecht (two parts; click below to listen). As you listen, keep in mind that it is important to remember the historical context of this global financial mess and the ideological undertones that played a role in shaping our financial markets.

Also, think about the wedge issues that are diverting attention from today's bigger problems, including the fundamental breakdown of our pension system.