Lessons From a Tsunami Survivor 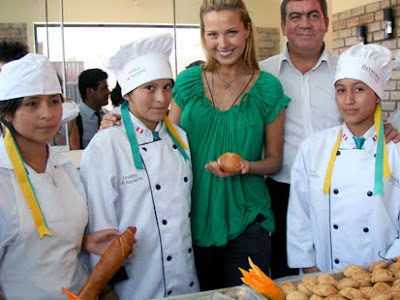 I would like to follow-up on my last comment on Katie Piper's Christmas message with another inspirational story from yet another beauty who survived a harrowing ordeal five years ago.

Nearly five years ago Petra Nemcova was swept from her hotel room when a tsunami struck Thailand. Now the 30-year-old model is helping to heal others by rebuilding schools for the children who lost everything, not just in the deadly 2004 tsunami but in natural disasters around the world.

"Really, honestly, what I'm doing now, being able to improve, and better lives of children, that's what I always wanted to do," Nemcova said.

Four months after Nemcova clung to a tree for eight hours to save her life she went back to visit the tsunami zone. She said she would never forget the faces of the children.

Five years later, the foundation has expanded and has provided help to children in eight different countries.

The team renovated and rebuilt the Chao Thai Mai School in Thailand.

They also built a primary school, helping a total of more than 1,500 children in Thailand.

The foundation built one primary school and 33 kindergartens in Indonesia, helping nearly 2,000 children. Indonesia was struck not only by the 2004 tsunami but by a devastating earthquake in 2006.

In Peru, which suffered a deadly earthquake in 2007, Nemcova helped rebuild two schools that served more than 3,000 children.

Petra Nemcova works to heal others by rebuilding schools for children who lost everything after natural disasters. In total, the Happy Hearts Fund built or repaired dozens of schools around the world that helped nearly 12,000 children pursue an education.

As the fifth anniversary of the tsunami disaster on Dec. 26 approaches, Petra said she wants to remind everyone of the lesser-known disasters, the children whose faces we don't always see and lives that were lost.

Petra is a stunningly beautiful lady but her inner beauty is what I find most impressive. Far from being bitter and withdrawn, she chose to move on and help those children that were left orphaned after that tsunami devastated their lives. You can watch her story by clicking here.

I would invite my readers to donate whatever they can to Petra Nemcova's Happy Hearts Fund as well as the Katie Piper Foundation.

I know it's Boxing Day and many of you are all tapped out, but it's important to take a step back and see where your dollars can serve the best interests of our larger global community.

Thanks again, and have a happy and safe holiday season.