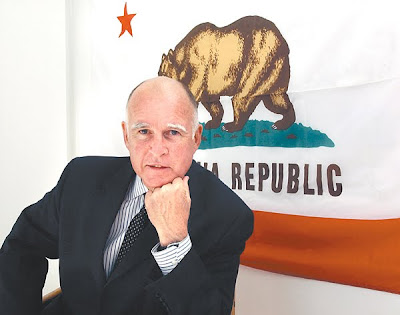 Brown did not say specifically what facets of the two biggest pension systems he would like to alter. His administration will release ideas in coming weeks, Brown said today in a speech to the League of California Cities, a conference in Sacramento for mayors, city council members and administrators.

Public pensions across the U.S. face a gap of as much as $3 trillion between their recession-battered assets and promised retiree benefits, according to a June study by researchers at George Mason University’s Mercatus Center in Arlington, Virginia. That puts pressure on states, cities and counties struggling with a drop in tax collections.

Brown’s proposals will be scrutinized, said Pat Macht, a spokeswoman for Calpers.

“Everyone who cares about pensions will be interested in the details,” she said in an interview.

Fred Glass, a spokesman for the California Federation of Teachers in Alameda, said in a telephone interview that members expect their due.

“I’m assuming they are going to live up to the obligations that government has made over the years,” he said. “Public employees, including educators, typically earn less than their private-sector counterparts. The way they get close in compensation is by having strong pensions.”

Brown, a 72-year-old Democrat who took office this month, has proposed an $84.6 billion general-fund budget that calls for $12.5 billion in spending cuts, mostly to welfare programs and public universities, and $12 billion of additional revenue raised in part by asking voters to extend for five years higher income and sales taxes and vehicle-registration fees set to expire this year.

With an economy bigger than Russia’s, California has the deepest deficit of all U.S. states. The state has coped with $100 billion of budget gaps in the past three years amid the global recession.

I doubt he'll go as far as Utah, but once Governor Brown reveals the details, you can be sure the proposed overhaul of California's public pensions will be met with protests from unions. In a separate article, aiCIO reports, CalPERS Rebounds to Pre-Crisis Levels Following Lehman's Downfall:

Yet, the pension fund still has only roughly 70% of the money needed to cover benefits and as a result, CalPERS needs to demand more from taxpayers to cover those costs. “Taxpayers pay about 23 cents out of every dollar for the CalPERS’ retirement cost,” Joe Dear, the fund's chief investment officer, told Bloomberg. “That cost is going to go up slightly in light of the crisis, but that’s not an unreasonable amount and these pension liabilities stand like the state’s debt obligations, as an unavoidable commitment.”

Joe Dear, the chief investment officer of CalPERS, which lost 23.4% in the fiscal year that ended June 30, 2009, told the news service that there's no way to avoid liabilities which already exist. While the fund was fully funded at the start of the recession in 2007, it's now down to around 65%, Bloomberg reported.

The shortfall is not limited to CalPERS, as public pensions nationwide face massive shortfalls in the money needed to cover benefits promised to government workers. Lawmakers recently approved legislation that forces municipalities to pay more into pension funds over the next three decades in an effort to increase the funding level for pension schemes for local firefighters and police officers. Chicago officials worry that the new legislation will lead to increased costs and result in an up to 60% increase in property taxes. According to Bloomberg, Quinn said last week that he needs to analyze the bill, calling it an "important area of reform" imperative at the local level.

"Illinois is much like other states not keeping up with its annual payments to their fund," Pew spokesman Stephen Fehr told aiCIO in November. "They've been increasing benefits to public employees without thinking how they are going to pay for them in the future," he said. "It's not just the recession that caused this problem -- Illinois didn't manage their pension bill in good times and bad, and its not a problem that will get better anytime soon," noting that the pension deficit around the nation has led to severe underfunding in other state programs to make up for mismanagement.

The effects of public pension shortfalls will be felt as states cut back other programs to make up for mismanagement. Will pension deficits shrink in the coming years? That depends. Ideally, stock markets will continue rising along with interests rates so assets grow at the same time that liabilities fall. But that's no quick fix and hardly guaranteed, which is why California and other states are taking measures now to overhaul public pensions.

This is total nonsense. My views are based on facts, not ideology. The fact is that defined-contribution plans have severely underperformed defined-benefit plans. They're aren't managed nearly as well (no alignment of interests), and they don't invest in public and private asset classes around the world. Worse still, the fees are much higher and they're more volatile because their performance is based mostly on beta, with hardly any alpha.

I end this comment by asking a simple question: why shouldn't workers enjoy the same pension benefits that their elective representatives have? If private companies and governments were smart, they'd be thinking hard about bolstering defined-benefit plans, not promoting defined-contribution plans because they cost less in the short-run (long-run is a different story). It's amazing how shortsighted we've become on one of the most important public policy issues of our times.

CalPERS says investments grew 12.5% in 2010. The smaller CalSTRS ends the year with a 12.7% return as the nation's two largest public pension funds get back on track after suffering steep losses during the recession. Read up on CalPERS' and CalSTRS' 2010 performance by clicking here.