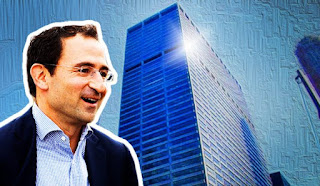 The firm, already the private equity industry’s largest real estate investor, will have a strategy similar to its last fund, investing in distressed properties globally, according to people with knowledge of the plans. Blackstone’s prior fund gathered $15.8 billion in 2015.

Blackstone is seeking capital at an opportune time. Institutions such as public pension plans and insurance companies are betting big on property assets to protect against inflation and broaden their holdings beyond stocks and bonds. The number of investors allocating $1 billion to the space keeps increasing, according to data provider Preqin. 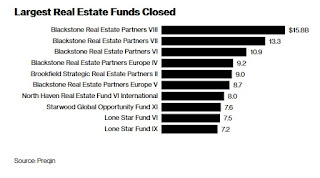 Beyond real estate, investors are piling into alternative assets, helping firms raise much larger funds than before. The private equity industry brought in a record $453 billion last year. Blackstone, like its rivals, is taking advantage of that demand. It expects to raise more than $20 billion for its eighth buyout fund, Bloomberg reported in July. Its prior buyout fund was a third invested at the end of June, according to a regulatory filing.

Real estate investments are a big profit driver at Blackstone. That can largely be credited to bets made by Jon Gray, who earlier this year was promoted to president and chief operating officer after making the firm a property giant.

Under Gray’s leadership, at the height of the real estate boom in 2007, the firm paid $39 billion for Equity Office Properties Trust and $26 billion for the Hilton hotel chain. Those investments made profits of more than $20 billion. Kathleen McCarthy and Ken Caplan took over running the real estate group this year.

Blackstone started its real estate business in 1991 and has expanded it to $119 billion in assets. It owns investments in hotels, offices, retail, industrial and residential properties in the U.S., Europe, Asia and Latin America.

The firm’s eighth real estate fund produced a 1.4 times multiple on invested capital before fees as of the end of June, according to a regulatory filing. Its funds from 2011 and 2007 reported a 1.9 times and 2.5 times gross multiple, respectively.


Blackstone Group is looking to raise $18 billion for its largest real estate fund to date.

New York-based Blackstone will invest the money in distressed properties globally, according to Bloomberg, which first reported the news.

So Blackstone, one of the best alternative investment firms globally, is raising $18 billion for a distressed real estate fund.

Why am I beginning my week with this article? Who cares if Blackstone is raising yet another multibillion dollar real estate fund?

Because this is a sizable fund, Blackstone's largest, and it signals where it sees opportunities in the near future.

When you're assessing risk across public and private markets, you need to pay close attention to what the leaders are doing with their own funds.

And Blackstone is definitely a leader. A distressed real estate fund of this magnitude should catch your attention and you should ask why Blackstone is raising this money.

Basically, they see dislocations in real estate and want to be prepared to pounce on opportunities as they arise.

Where will they focus their attention? I'm not privy to that information. I don't know if their focus will be in the US and which sectors they will invest in but I have a strong feeling this fund will be in high demand, unlike the massive Saudi-backed infrastructure fund it trumpeted last year which is struggling to raise money.

The main point here is focus where the big money is going. I recently discussed how PSP is bolstering its private debt arm, focusing on investments in distressed companies.

When big money is preparing for distressed debt opportunties in real estate, private debt or elsewhere, it tells you we are in the late innings of the economic cycle and stock market.

A lot of companies and real estate developers are going to have a tough time refinancing when the economy falters, and this is the environment in which is where distressed debt thrives.

Keep that mind the next time someone asks you why invest in distressed debt.

If I had to invest in one real estate investor, it would be with Blackstone's Crown prince, he's very impressive and knowledgeable. Take the time to watch this interview.