The 7th Inning of the Cycle? 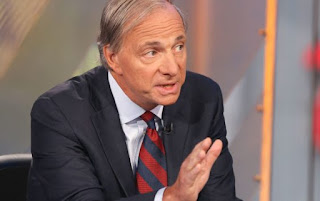 Matthew Belvedere of CNBC reports, Ray Dalio: We are in the 7th inning of the current economic cycle:


Ray Dalio, the billionaire founder of the world's biggest hedge fund, told CNBC on Tuesday that the current economic cycle is in the seventh inning, predicting it has about two years left to run.

To help keep the economy and stocks moving forward, the Federal Reserve should not increase interest rates faster than the market expects, said Dalio, co-chairman and co-chief investment officer of Bridgewater Associates.

For now, Dalio warns that investors should be "more defensive" in the stock market and "as time progresses" he sees the risks increasing.

The "upside looks limited" because a lot of cash on the sidelines has been put to work and the benefits of the corporate tax cuts are "behind us," he added.

On Monday, Dalio put out a new book, "A Template for Understanding Big Debt Crises," as a free PDF or for purchase as an e-book and printed edition. He hopes that examining what caused the 2008 crisis will help prevent futures ones.

The biggest takeaway from the 2008 downturn, according to Dalio, is that central banks need to pay closer attention to bubbles that often precede crises. Current debt levels in relation to income are not troubling, he added.

Appearing on "Squawk Box" during the 10th anniversary week of the crisis, Dalio said the next crisis won't be a big bang-type affair but one that leads to more severe social and political problems.

Ten years ago this week, Lehman Brothers collapsed touching off a crisis that sunk the economy and the stock market, and led to government bailouts of financial firms and automakers and an extraordinarily easy Fed monetary regime.

On CNBC Tuesday, Dalio also talked about President Donald Trump's tariffs on China, saying they're not "that big of a deal." China is likely more concerned about its relationship with the United States, he added.

Bridgewater Associates, with $150 billion in assets under management, was started by Dalio in his two-bedroom apartment in New York City in 1975. Along the way to becoming a titan of finance and philanthropy, Dalio almost went bust in the early 1980s. He has said that near failure was a wake-up call, which highlighted the need to surround himself with independent thinkers to stress test his theories.

Dalio, according to Forbes, has an estimated net worth of $18.1 billion.

When Ray Dalio speaks, investors listen. Most of the large pensions, sovereign wealth funds and other large institutional investors have allocated to Bridgewater which has performed well over many years, catapulting Ray Dalio to the Forbes list of the wealthiest people on the planet.

If you told Ray he'd become one of the richest men on earth back in 1975, I doubt he would have imagined it.

Anyway, is Ray right, are we in the seventh inning of the economic cycle? Nobody really knows but if you ask me, we are closer to the ninth inning as the cycle has already peaked according to leading economic indicators and global PMIs.

People focusing on inflation and employment are focusing on lagging and coincident economic indicators which is typical at this point of the cycle.

So whether we are in the 7th or 9th inning, it doesn't matter because I agree with Ray, as time goes by, the risks are rising and investors need to position themselves defensively now to prepare for the eventual slowdown.

It's important to understand why risks are rising. As the Fed raises rates, it reduces global liquidity, spreads start to widen, the US dollar gains and financial conditions become more restrictive. The lagged effects of rising rates is starting to hit risk assets, especially emerging market stocks and bonds.

So, on the one hand, the US economy is roaring according to employment indicators but on the other, emerging markets are getting whacked hard and the risks are if the Fed continues raising rates, it will precipitate an emerging markets crisis which is deflationary.

My fear, however, is the Fed is already determined to continue raising rates based on lagging and coincident economic indicators and just keeping an eye on what's going on in emerging markets.

This is where a policy error can happen because if the Fed overdoes it and raises rates too much, it will trigger a crisis in emerging markets, and we will need to prepare for a deflationary wave.

This is what Ray Dalio is hinting at but his comments were focused more on the domestic economy. His friend Larry Summers has openly questioned why the Fed is continuing to raise rates and I agree with him.

As I've stated plenty of times before, pension deficits and demographic pressures are deflationary and will impact long-term growth and keep rates ultra-low for a very long time.

Below, Ray Dalio, Bridgewater Associates founder, co-chair and co-chief investment officer, discusses his new book, "A Template for Understanding Big Debt Crises," which looks back on the lessons learned from the financial crisis.

Also, Ray  examines the crises is Turkey and Argentina and explains his expectations for the next economic downturn. He speaks with Bloomberg's Erik Schatzker on "Bloomberg Daybreak: Americas."