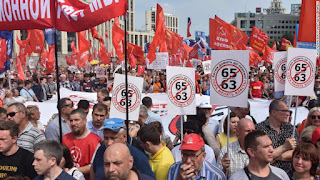 
Russians held rallies throughout the country Sunday to protest a government plan to raise the age for receiving state pensions.

Other demonstrations were reported in at least a dozen cities throughout the country including Vladivostok in the Far East, Simferopol in Russia-annexed Crimea and Omsk, Barnaul and Novosibirsk in Siberia.

No arrests were immediately reported. The rallies had official sanction.

The plan was introduced in June and has passed first-reading in the lower house of parliament. But widespread opposition has persisted and President Vladimir Putin’s approval ratings in polls have fallen notably since the plan was announced.

The plan would retain the raising of the men’s pension age from 60 to 65, implementing the steps up over five years.

The plan has attracted opposition from a notably wide spectre of age groups and political beliefs. Alexei Navalny, the anti-corruption activist and Putin foe who has built his movement on relatively young and well-educated urbanites, has called for his supporters to rally nationwide next Sunday.

People who appeared to be in their 20s and 30s made up a large part of the Communist-called rally in Moscow. Younger opponents of the move fear that keeping older people in the workforce longer will shrink job opportunities for them. Older people complain they may not live long enough to collect significant benefits.

“The reform that the government offers deprives our women of a normal pension. This reform doesn’t give our youth the chance to get a good job,” Communist Party head Gennady Zyuganov said at the Moscow rally.

The Communists are demanding to have the issue put to a national referendum.

The average life expectancy in Russia was notoriously low in the 1990s, but has risen in recent years. It stands now at about age 67 for men and 78 for women.

Proponents of increasing the age for collecting a pension say the pension system would be overburdened if the eligibility threshold isn’t adjusted since Russians are living longer.

The pension reform was announced in June on the eve of the opening of the Russia-hosted soccer World Cup. Many critics saw the timing as an attempt to introduce a controversial idea while Russians were distracted by the tournament’s excitement.

But Putin’s polling numbers dropped significantly. A weekly survey by the Fund For Public Opinion found 61 per cent saying they fully or mostly trusted Putin in mid-August, down from 75 per cent just before the pension reform proposal.

Nothing like cutting pension benefits to see your popularity sink fast. Even an ironman like Putin is no match for unpopular pension reforms.

Last week, I discussed America's broken retirement system and highlighted how professor Teresa  Ghilarducci traced the origins of the Social Security's problems back to reforms Congress and President Reagan enacted in 1983:


In 1983, Congress and the President [Reagan] decided to restore Social Security solvency by cutting benefits and raising revenues equally. The FICA tax [Federal Insurance Contributions Act tax] was raised slightly and benefits were cut by raising the age people can collect full benefits from 65 to 70.

Of course, raising the eligibility age of any pension isn't popular in any country but in countries where life expectancy is growing, it simply makes sense to address longevity risks.

That's why I'm not in full agreement with people who think you should never raise the pension eligibility age. It all depends on how long people are living.

If, for example, the percentage of retirees over 100 years old grows from 2% to over 5% in ten years, that puts enormous pressure on pensions. This is why on top of raising the eligibility age, I'm also a big proponent of adopting a shared risk model, typically in the form of adopting conditional inflation protection.

Everyone wants a pension. Great but are they willing to make small sacrifices to ensure the pension system is sustainable over the long run and equitable between generations?

Now, back to Russia, life expectancy between 1994 and 2016 increased by more than 7 years, while rates of death among children under age 5 decreased nearly 60%, according to the most extensive health study on the nation ever conducted.

According to Dr. Vladimir Starodubov, director of the Federal Research Institute for Health Organization and Informatics (FRIHOI) of the Ministry of Health, "Significant improvements in the health indicators of the population of the Russian Federation have been achieved and it is a credit to state alcohol policy, improving medical care, and increasing attention to a healthy lifestyle."

But there is still room for more improvement. Men living on average to 65 is hardly great by Western standards, so I can understand why many Russian men and women aren't keen on raising the retirement age.

If I were advising Putin and the bureaucrats in Moscow, I would go easy on any reform which wants to significantly raise the retirement age.

Focus on easier, more politically palatable reforms first. Make the pension system far more transparent, hire top pension fund managers and pay them well to manage public and private assets  around the world internally and have an independent and qualified board overseeing these pensions.

More importantly, adopt some form of a shared risk model to ensure these public pensions are sustainable over the long run and intergenerational equity is maintained.

Putin is already feeling the sting of drastic pension reforms. In fact, the proposed reforms might jeopardize his own happy retirement which is probably why he intervened last week to soften the blow (not that he's relying on his cushy pension to retire comfortably).

Below, Russians held rallies throughout the country Sunday to protest a government plan to raise the age for receiving state pensions. I foresee more rallies ahead protesting pension reforms, and not just in Russia.