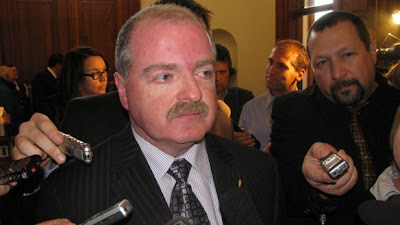 A group of pension management executives who presided over the loss of $1.6 billion in investment assets for the New Brunswick government last year collected $592,000 in bonuses.

The New Brunswick Investment Management Corporation disclosed in its annual report released Wednesday that a number of its executives were paid the performance bonuses, even though the funds they supervise lost more than 18 per cent of their value in the same year.

The rest of the civil service was placed under a strict governmentwide freeze on bonus payments and similar bonuses were cancelled at other Crown corporations, such as NB Power.

The corporation defended the bonuses, noting they were much less than the $1.3 million paid out a year earlier. Additionally, these payments were meant as a reward for good results over a four-year period despite poor results in 2008-09.

"The previous three fiscal years had positive net value added results which help to offset the fiscal 2008-09 performance," said the corporation in explaining the bonus.

However, the report also made it clear that losses in 2008-09 were so bad they wiped out all of the gains in the previous three years and then some, after inflation.

The annual report also states that after the market collapse, the corporation decided in December 2008 to freeze salaries in 2009-2010.

The Department of Finance said it plans to review the operation of the investment corporation, including its bonus program, in the near future.

Fitch said in an interview on Thursday that he was under the impression that those bonuses were on hold.

"It wouldn't have been the end of the world if the bonuses were deferred or not paid for a year or two, given the circumstances," Fitch said.

The N.B. Investment Management Corporation is a government agency that manages the retirement funds for its teachers, judges and thousands of civil servants.

It had $8.7 billion in assets under its management at the start of the 2008-09 fiscal year, but lost $1.6 billion of that when stock markets crashed last fall.

The corporation has paid out modest bonuses to certain key executives for several years, but more recently upped the amounts dramatically.

John Sinclair, the corporation's president, is the highest paid employee in the New Brunswick government, earning more than $475,000 last year.

Auditor General Mike Ferguson raised questions about the bonuses being paid to the investment managers in his last report. He recommended the Department of Finance step in and set some kind of limit on what can be paid out.

I glad to see the N.B.'s Auditor General questioned the bonuses being paid to the investment managers in his last report. I hope the Auditor General of Canada also questions the bonuses that were recently awarded to senior managers at PSP Investments and relays her concerns to the Treasury Board and Department of Finance.

Bonuses to senior pension fund managers must be scrutinized, deferred, limited or abolished altogether, and in some cases, clawed back. They can't keep losing billions of dollars and hide behind some four-year rolling return to collect big bonuses. At one point, this nonsense has to stop and the government has to step in and protect all stakeholders, including Canadian taxpayers.