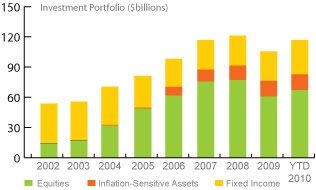 The Globe and Mail reports that CPPIB rides market rebound:

The Canada Pension Plan Investment Board bounced back in the first quarter, posting a 7.1-per-cent rate of return thanks to soaring global markets.

The rebound, combined with steady inflows from contributions, boosted assets as of the June 30 quarter end to $116.6-billion from $105.5-billion three months earlier.

Plunging stocks and declines in the value of other assets left the fund with a negative return of 18.6 per cent in the year ended March 31.

“We are pleased with the $11.1-billion increase in the fund and the positive 7.1-per-cent return for the first quarter,” said David Denison, president and CEO of CPP Investment Board. “At the same time, the negative returns of our past fiscal year and the positive results of this first quarter both need to be viewed within the context of our long-term strategy. We continue to focus on delivering solid returns over the span of multiple years and indeed decades.”

In the decade since CPPIB began investing funds from the national pension plan, it has generated an annualized 4.9-per-cent rate of return, representing almost $32-billion in investment income to supplement Canadians' contributions.

The press release on CPPIB's website offers a bit more information but the news of a rebound is hardly surprising. Just look at the asset mix:

Please keep in mind that the quarterly performance that CPPIB posts does not include valuations of their private market holdings (real estate, private equity and infrastructure).

The only reason I mention this is that the Caisse just reported a $5.7 billion loss in the first half of its fiscal year, mostly owing to losses in real estate. As I mentioned in my last post, real estate woes will sink pensions, so don't get too excited about a quarterly rebound in public equities.

Long-only hedge fund strategies posted the best returns of the asset class in July as global stock markets continued their upward trend, according to data in a report published by Lipper Global on Tuesday.

As the industry looks to repair itself following last year's heavy losses and record redemptions, these new figures will give more ammunition to market watchers who claim that the industry is on the road to recovery.

The data from the Thomson Reuters company showed that long-only hedge funds posting a 4.75 percent return for the month, building on gains of 14.34 percent for the year-to-date.

He pointed out the sustained rally in the second part of July in global stock markets.

The information released ahead of Lipper's monthly Hedge Fund Insight Report, which is due at the end of August, showed that all hedge fund strategies posted a positive performance last month, with long/short equity and multi strategies both giving returns of 0.81 percent.

Short bias strategies made a 0.40 percent return, boosted by profitable short sale strategies in the first half of the month, Lipper data showed.

Global stock markets gained 8.5 percent in July, according to the MSCI World TR Index. They continued their rally from March lows, fuelled by hopes that the worst of the financial crisis has passed.

"The market is already looking for the next macro catalyst to drive market direction; there are a still a number of risks of market correction," he said.

Among the other hedge fund strategies, options arbitrage performed strongly in July, with returns of 0.88 percent. Event-driven was the worst-performer, posting a 0.19 percent return.

The sharp rally in equities has provided some relief for global pension funds and hedge funds but things can change quickly in the second half of the year. As for CPPIB, once you factor in losses in private markets, I doubt their results will be looking as good at the end of their fiscal year (March 31st, 2010).

A quick analysis suggests the fund returns were not much better or worse than what a retail investor could have earned from a similar mix of investment funds.

In fact, the amateur investor could have done better by holding a higher percentage of Canadian stocks.

The CPP fund has shifted more toward foreign investments for long-term strategic reasons. It had only 14.4 per cent of its assets invested in Canadian stocks at the end of June, down from 23.6 per cent a year earlier. It had 43.1 per cent invested in foreign stocks, 32.7 per cent in bonds and 9.8 per cent in real estate and
infrastructure.

Canada's major stocks – dominated by energy, mineral and financial service companies – provided a near-20 per cent return during the quarter. Meanwhile, an index of leading global companies returned only 11.25 per cent in Canadian dollars, and an index of emerging market stocks about 15.6 per cent.

Denison said the CPP fund's real estate holdings held up relatively well, thanks to the CPP steering clear of the United States, although market values were last appraised at the end of March.