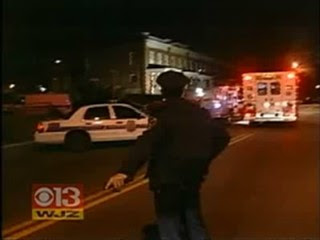 The city faces a $121 million budget deficit, and that number would balloon to $185 million without pension reform. Rawlings-Blake says the city can't afford the cost of maintaining the current system.

The city police union opposes that change, saying it violates officers' contracts. The police and firefighters' unions have sued the city over its handling of the pension system.

The unions are not taking this sitting down. Julie Scharper of the Baltimore Sun reports, Police, fire unions sue city over pension:

Baltimore's police and firefighters' unions filed a lawsuit against the city in federal court Thursday, contending that officials "knowingly underfunded" their pension plan over the past decade — ignoring the advice of financial experts hired by the city.

The lawsuit threatens to introduce a protracted and costly legal battle into the emotionally charged debate about altering the retirement benefits paid to public safety officers.

If officials do not make drastic changes to the pension system by July 1, the city will owe $65 million that it cannot pay.

Union leaders, who stress the dangerous and grueling nature of police and fire work, have resisted the pension changes that the city has proposed, saying they constitute a violation of their contract.

"Some in city government are portraying this as a crisis," said Bob Sledgeski, president of the firefighters union. "This has been long, ongoing neglect on the part of the city to follow their own experts' advice. That's not an accident, and 10 years does not a crisis make."

City Council members, led by Helen L. Holton, chairwoman of the taxation and finance committee, have been scrambling for a solution to the pension problem before the fiscal year ends June 30.

Scores of police and firefighters have threatened to resign or retire if their benefits are significantly diminished. But city officials, grappling with a $121 million overall budget shortfall, say they cannot pay much more than the currently allotted $101 million pension contribution, although the city's required obligations would be about $166 million if no changes are made in the way benefits are calculated.

The lawsuit, filed Thursday, names the mayor and City Council, pension board members, city finance director Edward J. Gallagher and public safety pension system director Thomas P. Taneyhill as defendants. In it, the unions allege that from 2003 to 2008, pension board members and city officials disregarded repeated recommendations by actuaries to reduce the pension fund's assumed rate of return because it would have forced the city to contribute millions more to the plan.

Is this one of many lawsuits over mismanaged pensions? I think so. But the reality is that both the city and the unions will need to concede something as they try to resolve this issue. During times of fiscal restraint, there isn't much of a choice.