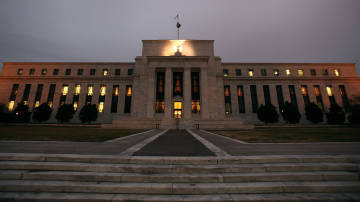 Michael Babad of the Globe & Mail reports, Why the Federal Reserve only tweaked its game plan:

The Federal Reserve held its benchmark lending rate steady this afternoon, but announced plans to buy long-term Treasury securities amid signs of a fizzling recovery and mounting fears of deflation. The central bank said it will use its mortgage-bond holdings to buy the paper, while at the same time still rolling over the other Treasury securities it holds as they mature. “The pace of recovery in output and employment has slowed in recent months,” the central bank's policy-setting panel said. The move is seen as a small step. Here's what some economists think:

The Fed is also worried about underfunded public and private pension plans. Last Monday, I wrote a comment on how the Fed is feeling states' pension pain and noted:

Let me repeat what I've often stated, the Fed's policy is geared towards banks, keeping rates low so they can borrow cheap and invest in risk assets all around the world. The Fed is hoping that reflation will translate into mild economic inflation, thus avoiding any prolonged deflationary episode which will hit banks' and pensions' balance sheets.

The reflation trade is alive & kicking, which is why smart money continues to buy the dips in equity markets. The doomsayers keep warning us that another disaster far worse than 2008 is on its way, but they've been wrong.

Nothing has changed after this latest announcement except that the Fed is more determined than ever to reflate risk assets using all their tools at their disposal. While some are queasing over quantitative easing, the reality is that Fed is sending a strong message that it's prepared to do whatever it takes to fight deflation.

And let's not kid ourselves, deflation would destroy banks, pension funds and the individual retirement accounts of millions of people. That's why I wasn't surprised with today's announcement.

The liquidity tsunami will go on as long as the threat of deflation persists. Don't try to fight the Fed because you'll always end up on the losing side of the trade. Lots of portfolio managers and hedge fund managers sitting on the sidelines, are underinvested. Expect them to come back in as another bout of performance anxiety grips them.

And mark my words, there will be more bubble trouble down the road, but we don't have to worry about this just yet. I see good things too, especially in the solar sector, where a secular bull market is in its early stages (Note: many ways to play this theme, including semis and inverters).

While everybody is dissecting the Fed's latest move ad nauseam, I keep things simple. The Fed will do whatever it takes to reflate risk assets to shore up banks' and pensions' balance sheets, and bring about mild inflation to the economic system. Are there risks to QE 2.0? Sure there are, but the bigger risk is if they do nothing at all.