Has the Fed Defused the Neutron Bomb? 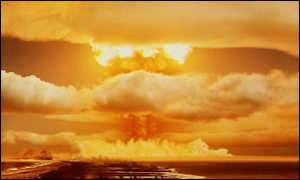 Low interests rates have made these the best of times for borrowers but the worst for savers and investors.

But these historically low bond yields have a darker side: According to a new report from Fitch Ratings, ultra-low interest rates will exacerbate the underfunding of many U.S. corporations' pension plans.

Just as with American workers who have failed to save enough for retirement and have seen their assets lose value, companies also will have no choice but set aside more of their earnings. And just as that means belt-tightening for consumers, it means corporations have less to distribute to their shareholders.

The burden of funding traditional pension plans—known as defined-benefit plans—is why they have waned in Corporate America. More common are defined-contribution plans—such as the ubiquitous 401(k)s—that have supplanted DB plans in the private sector. As has been reported widely, DB plans remain the standard in the public sector, which are decimating budgets of many states and municipalities.

But, according to Fitch, the low-yield, deflationary environment is adding to the problems of underfunded corporate pension plans. Again, the problem is two-fold: The decline in the values of investments, such as traditional stocks and commercial real estate, has hurt the asset side. The rush into so-called alternative investments such as hedge funds right at their peaks didn't help. The flip side is that low interest rates increase the present value of future liabilities.

Thus, a decline in bond yields can be as devastating to a savings plan as a drop in the stock market. According to Kenneth S. Hackel, president of CT Capital, a financial advisory firm, 1% cut in a retirement plan's assumed rate of return is roughly equal to a 15% decline in stock prices.

Fitch's analysts find the mean assumed return for corporate pension plans in 2008 and 2009 was 8%. That's with an allocation to fixed-income assets of 34% of the total. Treasuries and investment-grade corporate bonds yield far less than 8%, which is closer to the very long-term return from equities, which means they haven't locked in much of yesterday's higher yields. And, in case you need to be reminded, over the past decade or so, the return from stocks has been practically nil.

In line with Hackel's rough calculation, Fitch reckons a 1% cut in the assumed discount rate for companies' DB plan can result in a 10%-20% increase in the present value of future liabilities. How to bridge that gap?

"The fact is that there are no shortcuts—prudent management will likely require contributions well in excess of the minimum required given low yields and low equity returns," Fitch analysts write. Simply hoping for higher equity returns or bond yields simply isn't prudent, they add.

So, what's the answer? You know those hefty cash holdings on corporate balance sheets on which the bulls keep harping? Fitch thinks pension funding requirements will have dibs on corporate cash flows, and then the stock of cash on companies' balance sheets.

That's the thing about deflation; it's like a neutron bomb for corporate, public-sector and consumer balance sheets. Asset values and returns get decimated while liabilities remain standing. Except that falling interest rates make those future liabilities more onerous, requiring more belt-tightening, which only exacerbates the deflation.

As I've repeatedly stated, deflation is the arch nemesis of the financial sector and the Fed will do whatever it takes to avert it. Moreover, in order to address pension deficits, you need a rise in bond yields (lowers present value of future liabilities) and a rise in asset prices. In other words, you need a lot more days like Friday where stocks took off and bond yields backed up.

The Fed's policy has been geared towards the big banks and their big hedge fund clients. Reflate and inflate is the official policy. By borrowing at zero and investing in higher yielding Treasuries, banks lock in the spread, making instant profits which they then use to trade risk assets all around the world.

Is this policy succeeding? Yes and no. It's helping banks shore up their balance sheets and some elite hedge funds who thrive on volatility, but doing little to help the real economy which remains weak at this stage of the cycle.

However, that all may be changing. Over the weekend, I'll go over some encouraging signs that receive little or no attention in mainstream media. Below, listen to an interview with Nigel Gault, chief U.S. economist at IHS Global Insight as he discusses his views on the US economy and his take on Ben Bernanke's speech at the Fed's annual Jackson Hole confab.