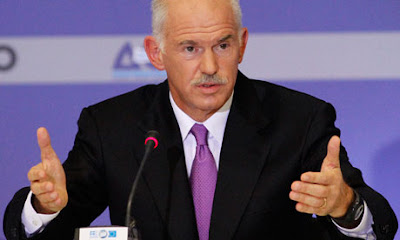 I spent the morning visiting Plastika Kritis, one of the largest Greek plastics manufacturers and a company that my uncle, John Lebidakis, founded with the help of my grandmother's brother. It's a well established company and a true sucess story in Greek industrial manufacturing.
My uncle also started a credit union here in Crete, so I had a chance to speak with him about the Greek economy. One thing he made clear to me: Greece will not leave the Eurozone as this is not in the best interest of Greece or Europe. "There are too many interests at stake to let Greece leave the Eurozone. I simply do not see this as a realistic option."
On the Greek economy, he emphasized that the biggest problems are competitiveness and the underground economy. "If you look at the scale of the problem, it's daunting, but not impossible to rectify. We need to adopt long-term measures to address these issues."
My uncle is a self-made businessman who still pulls in crazy hours in his early seventies. He took my father, myself and an other uncle of mine on a tour of his plant, explaining to us in intricate detail every step of the manufacturing process. His two sons, Michael and Emmanuel, both engineers (Michael also has a graduate degrees from INSEAD business school) and run different operations of the business. My aunt is retired but is still pulls long hours at the business (we call her the CFO). Another uncle of mine, who also retired, goes in every day to help the accounting department.
Although shares of Plastika Kritis float on the Athens Stock Exchange, the bulk of the shares are controlled by the immediate and extended family. The way they operate is by distributing 25% of the profits to shareholders and reinvesting 75% of the profits back into the business. I saw with my own eyes the revamped robotics of some manufacturing steps, which according to my uncle boosted productivity by 30%. My uncle believes it's important to reinvest back into your business to keep up-to-date with the latest technology in manufacturing. He also believes in R&D, which is why he has hired full-time researchers at the plant.
Why do I share this with you? Because there is a misconception that Greeks are lazy and don't work hard. Plastika Kritis isn't the only Greek industrial success story, but it's one that's close to me as I grew up watching them nurture that business over the years. I am proud of my uncle and my family, but there are many other equally impressive stories in the Greek private sector.
Over the weekend, Greece's Prime Minister, George Papandreou, gave an important speech on the economy, and stated that no new austerity measures are needed to avoid default. I certainly hope so, and while everyone is negative on Greece, I see enough human capital and industrial sucess stories to inspire confidence and make me feel good about Greece's future.