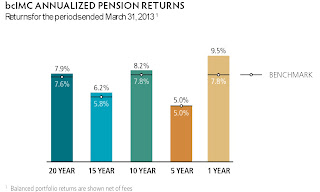 
The British Columbia Investment Management Corporation (bcIMC) today released its combined pension plan returns for the year ending March 31, 2013 as part of its 2012–2013 Annual Report. With a one-year annual return of 9.5 per cent, net of fees, the results exceeded a combined benchmark of 7.8 per cent and added $1.5 billion in value to bcIMC's pension plan clients.

“Our domestic real estate and public equities portfolios were the primary drivers of our positive results last year,” said Doug Pearce, Chief Executive Officer/Chief Investment Officer of bcIMC. “On behalf of our clients, we began significantly increasing asset allocations towards real estate and infrastructure in 2011, and this heavier weighting to real assets is beginning to drive investment returns.”

There were a number of highlights from the past year, including:
"I am also pleased with the investment returns for the 10-year period. bcIMC delivered an annualized return of 8.2 per cent against a combined benchmark of 7.8 per cent. As a result, our investment activities contributed $3.2 billion in added value for our pension plan clients," added Pearce. 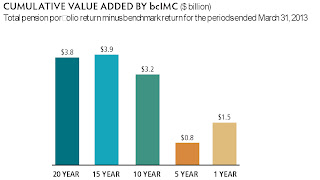 As stated in the news release, domestic real estate and public equities portfolios were the primary drivers of their positive results last year. Doug Pearce, Chief Executive Officer/Chief Investment Officer of bcIMC, stated that  they began significantly increasing asset allocations towards real estate and infrastructure in 2011, and this "heavier weighting to real assets is beginning to drive investment returns."

Over a 20-year period, bcIMC's domestic real estate portfolio returned 10.1%, exceeding its benchmark by 4.2 percentage points. I have a couple of points to add on this. First, while the spread over inflation is one way to gauge the performance of real estate, as I stated in my comment on AIMCo's 2012 record results, the REALpac/IPD Canadian All Property Index – Large Institutional Subset is a benchmark which better reflects the performance of this asset class.

Still, real estate is an important asset class, and since 1991, bcIMC has been building a domestic real estate portfolio that has a long-term, comprehensive focus and is capable of generating consistent returns through varying economic cycles.

Once again, I urge my readers to carefully go over bcIMC's Annual Report for 2012-2013. There is a lot of information I simply cannot cover here. I like their thematic approach to long-term investing and think many pension funds should adopt a similar approach for investing in public and private markets.

I congratulate Doug Pearce and all the employees at bcIMC for delivering strong and consistent long-term results. You don't hear a lot about bcIMC but they've been doing a great job managing pension assets for their clients and the organization deserves its place among Canada's top ten.