Record Results For AIMCo in 2012 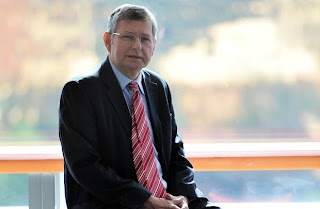 While I was away, Gary Lamphier of the Edmonton Journal reported, Record results for Alberta’s pension fund manager AIMCo in 2012:


Alberta’s $70 billion pension-fund manager posted the strongest returns in its five-year history in 2012.

The gain included an 11.9 per cent net return on AIMCo’s balanced funds — managed on behalf of 27 provincial pension and endowment funds — and a 2.9 per cent net gain on short-term government funds.

The overall 10.2 per cent uptick was $1.3 billion or two full percentage points above the market benchmark against which AIMCo measures its performance.

“We added $1.3 billion of returns with very little incremental risk, and it’s that combination of the two that makes last year’s results very attractive,” said Leo de Bever, AIMCo’s CEO. “The normal long-term return on what we do is around six per cent, which assumes about seven to eight per cent on equities and three to four per cent on bonds, so this was an unusual year.”

AIMCo, which recently changed its year-end to Dec. 31 from Mar. 31, partly to more easily compare its performance against its peers, posted a net return of 4.8 per cent for 2011. The returns for 2012 boosted AIMCo’s annualized net gains over the past four years to 7.9 per cent, the company said.

Despite the double-digit gains for 2012, AIMCo’s total assets under management declined slightly to $68.6 billion, as the province continued to draw down the balance of its Sustainability Fund. The so-called rainy day fund, which reached a peak of some $17 billion in 2008, held just $3.3 billion of remaining assets at the end of March.

Since 2009, a total of $26.1 billion has been withdrawn from various government and endowment funds, AIMCo reports. Offsetting that, new contributions totalled $3.6 billion during the same period, while AIMCo generated $20.6 billion of total returns.

AIMCo’s performance last year was driven largely by stellar returns on its nearly $30 billion stock portfolio, which showed a net gain of 15.2 per cent. AIMCo’s U.S. and other international equity holdings rose 17.4 per cent, while Canadian equities posted a return of 11.6 per cent.

“The biggest issue we foresaw last year was the end of the bull market in bonds, and that’s coming on in spades this year,” said de Bever.

Bond markets have been hammered — as have equity markets — in recent weeks as the U.S. Federal Reserve Board prepares to curb its $85 billion US of monthly bond purchases later this year.

After a sizzling first-quarter rally, the recent market correction has sharply reduced AIMCo’s net returns on a year-to-date basis to roughly two per cent, de Bever said, while warning that last year’s double-digit gains won’t likely be repeated in 2013.

Nonetheless, he said the market’s adjustment to faster U.S. economic growth and higher interest rates in future is a necessary one, and could pave the way for a resumption of stronger returns down the road.

“This might be the pause that refreshes. The bond market already is adjusting for all the right reasons, and if the stock market were to drop another 10 per cent or 15 per cent, I think I would have no qualms about staking out a bigger position (in equities),” he said.

Since late June, when this article was written, stock markets have resumed their uptrend. Details on AIMCo's results can be found in their latest annual report. The results are very impressive:
The table below summarizes net returns and value-added for AIMCo's last four calendar years (click on image):

Keep in mind, these are net returns, net of expenses, which is the way all pension funds should report their results. I also like the way AIMCo clearly presents its benchmarks for its policy portfolio (click on image): 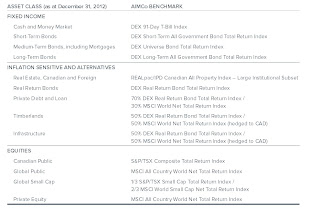 Moreover, in real estate, they use REALpac/IPD Canadian All Property Index – Large Institutional Subset as a benchmark, which better reflects the performance of this asset class. Interestingly, de Bever told Bloomberg that “real estate is one of the things that keeps me awake,” and repeated “the kind of returns we’ve seen of 10 percent is not sustainable.”

I agree, those type of returns are not sustainable but the results for 2012 are very impressive. I congratulate Leo de Bever and all the employees at AIMCo for delivering such exceptional results with little incremental risk and at a fraction of the cost than it would cost to outsource these investments. Again, take the time to read AIMCo's annual report, it is well worth reading.